8MM Gets Projected Onto Scream Factory Blu-ray In January

How did your grandfather capture his family in motion for Christmas 1972? There was no such thing as a cellphone with a video button. They wasn’t an affordable consumer video camcorders. Grandpa had to bust out an 8mm film camera that had the ability to record sound if he paid extra. 8mm has Nicholas Cage (Valley Girl) playing a detective hired to find out the truth about a roll of 8mm film. He goes deep into the belly of the underground of Hollywood. Now 8MM comes out on Blu-ray from Scream Factory on January 8, 2019. Here’s the press release from Scream Factory that includes the bonus features: 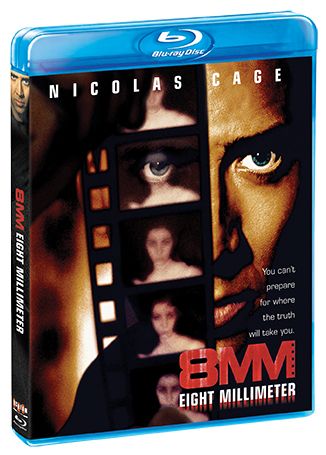 A Film by Joel Schumacher

ARRIVES FOR THE FIRST TIME ON BLU-RAY™
JANUARY 8, 2019 FROM SCREAM FACTORY™

Academy Award®-winner Nicolas Cage (1995, Best Actor, Leaving Las Vegas) stars in 8MM, an electrifying thriller about one man’s obsessive search for the truth about a six-year-old crime and his ultimate discovery of the truth about himself. On January 8, 2019, SCREAM FACTORY™ is proud to present 8MM on Blu-ray™. Directed by Joel Schumacher (Batman Forever, A Time to Kill) and written by Andrew Kevin Walker (Se7en, Sleepy Hollow, The Follow), the film stars Nicolas Cage (Looking Glass, Face/Off), Joaquin Phoenix (Walk the Line, Her), James Gandolfini (The Sopranos, The Drop), Peter Stormare (Longmire, The Blacklist) , Anthony Heald (The Silence of the Lambs, Red Dragon), and Chris Bauer (The Deuce, True Blood). A must-have for movie collectors and thriller enthusiasts, this definitive Blu-ray release contains special bonus content. Pre-order is available now at ShoutFactory.com