My life seems to be currently divided into two phases: “New Episodes of Rick and Morty” and “Reruns of Rick and Morty.” The Adult Swim animated show has quickly infested my life like a creature brought to life by Rick Sanchez. It’s a work of beauty and chaos coated in Szechuan sauce and booze. This could have been a boring dull cartoon a boy tagging along with his inventive grandfather. But they made Rick a grandfather who is all about intergalactic debauchery in a world where David Cronenberg creations dominate. Over the course of three seasons, the adventures have been out of control. Now you can get all 31 episodes that have aired in one boxset. Rick and Morty: Seasons 1-3 arrives on February 12 just in time for Valentine’s Day. Here’s the press release from Adult Swim: 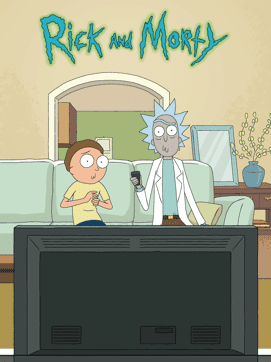 Arriving on Blu-ray™ and DVD February 12,
Featuring All Current Episodes from the Emmy® Award Winning Series

Adult Swim fans can prepare for the arrival of new episodes of Rick and Morty by catching up on the complete series with the Rick and Morty Seasons 1-3 Box Set, coming to Blu-ray and DVD on February 12, 2019. From creators Dan Harmon (Community) and Justin Roiland (Adventure Time), the award-winning comedy has amassed a major following to become a pop culture phenomenon, garnering almost 1.6 billion views since its launch in December 2013.

Featuring fan favorites such as “The Ricklantis Mixup,” the #1 watched telecast in Adult Swim’s history, “Total Rickall” and “Pickle Rick,” the Rick and Morty Box Set is bursting with laugh-out-loud hilarity including all bonus content from the 3 previous seasons on DVD, like commentary from Chris Parnell, Matt Groening, “Walking Dead” creator Robert Kirkman and showrunner Scott Gimple. The box set also includes an exclusive poster that features a custom, never-before-seen robot illustration of Rick and Morty.

The Rick and Morty: Seasons 1-3 Blu-ray and DVD also includes past animatics, providing viewers a look into the creation of the show’s most bizarrely funny moments, “Inside the Episode” looks and additional featurettes. The Blu-ray and DVD box sets will retail for $69.99 and $59.99, respectively.

Adult Swim (AdultSwim.com), launched in 2001, is Turner’s network offering original and acquired animated and live-action series for young adults. Airing nightly from 8 p.m. to 6 a.m. (ET/PT), Adult Swim is basic cable’s #1 network with persons 18-34 and 18-49 and is seen in 94 million U.S. Homes.

Adult Swim is part of Turner, a WarnerMedia company, a global entertainment, sports and news company that creates premium content and delivers exceptional experiences to fans whenever and wherever they consume content. These efforts are fueled by data-driven insights and industry-leading technology. Turner owns and operates some of the most valuable brands in the world, including Adult Swim, Bleacher Report, Boomerang, Cartoon Network, CNN, ELEAGUE, Great Big Story, HLN, iStreamPlanet, TBS, Turner Classic Movies (TCM), TNT, truTV and Turner Sports.