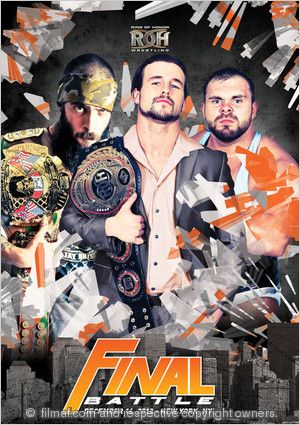 ~PRESHOW MATCH~
Brutal Burgers (Brutal Bob & Cheeseburger) defeat Team Benchmark (Will Ferrara & Bill Daly) at 4:50. I’m fine with this match being on the preshow. This follows the usual tag team formula, and Cheeseburger plays the face-in-peril, as will be his destiny for his entire career. Bob eventually gets the hot tag and cleans house. He puts Cheeseburger on his back and squashes Ferrara in the corner. Brutal Burgers then hit a Stunner from that position to get the pin. Fine little pre-show match, nothing much to it.
Rating; *½

~MATCH #1~
Matt Hardy defeats Adam Page at 8:20. This is a contrast in styles, as Page wants to go-go-go, and Hardy works to slow the pace. Hardy tries to keep Page grounded, and frequently goes for his signature and finishing moves. Page looks good here, but ultimately misses a high cross body from the top rope, and Hardy hits the Twist of Fate for the win. Hardy getting booed is always fun (and I mean that in a good way), and that made for a decent opener. Overall, Page looked good losing here.
Rating: **½

~MATCH #2~
Silas Young defeats Mark Briscoe in a Strap Match at 9:15. This has been a heated issue, resulting in the first strap match in ROH history. This is a “touch all four corners” type of strap match. They fight both in and out of the ring and use everything at their disposal to beat on their rival. After some back and forth action, Young puts Mark over his shoulder and starts touching corners. Mark touches all the buckles just a shade behind Young, but Young grabs the referee’s shirt to give himself some extra leverage, and that’s enough to touch the fourth corner and get the win. This is the kind of stipulation match that doesn’t do much for the guy that wins it. He just touched all four corners, who cares ya know? The action was solid if unspectacular.
Rating: **¼

~MATCH #3~
The Young Bucks (Nick Jackson & Matt Jackson) defeat Adrenaline RUSH (ACH & TaDarius Thomas) at 12:29. Nick and Matt are the current IWGP Junior Heavyweight Tag Team Champions. This one is going to be fast and hard to keep up with. ACH and Thomas are the less established team, and that shows early on. The Bucks isolate Thomas. keeping him in their half of the ring. Looks like Thomas injures his shoulder early on, and the Bucks focus on it. Thomas fights back with kicks, which is great because it’s his strength in general and the Bucks haven’t been working on it. ACH gets the hot tag and he picks the pace right up. The referee completely loses control and the action reaches a fever pitch. Matt and Nick isolate Thomas and connect with More Bang for Your Buck to get the pin. That was tremendous, non-stop action, elevated by the arm work that made sense and helped build heat for the Babyfaces. The crowd chants “That Was Awesome.”
Rating: ****

~MATCH #4~
Kevin Steen defeats Michael Bennett (w/ Maria Kanellis) at 16:44 in a Stretcher Match. The loser of this match won’t be able to use his piledriver finishing move anymore. The battle quickly spills to the floor, where they trade control back and forth. Steen introduces a chair into the ring, but it’s Bennett that uses it to his advantage, wearing Steen out. After much back and forth, Steen is the first one to hit his signature move, the Package Piledriver. Steen calls for the stretcher, and security begins to carry him back, but they’re stopped be Maria. That doesn’t sit well with Steen, who takes Bennett out with a somersault plancha! Steen tears apart the lame stretcher and brings Bennett back to the ring. Bennett counters a piledriver with a low blow and unloads on Steen with a steel chair. He brings Steen to the apron and teases a piledriver but settles for breaking a table with a Box Office Smash. Kelly and McGuinness talk about how this is a Last Man Standing match now, but I don’t know how official that is. Momentum continues to shift, and Steen takes Maria out and hits Bennett with a Cradle Piledriver. Steen sets up three chairs and hits another Package Piledriver, and Turner calls the match. I’m not sure why they couldn’t follow up on the Stretcher Match stipulation, but this was a very good brawl that felt like they were really fighting about something. The finish was a definitive finish in every sense of the word, so this was very satisfying.
Rating: ***¾

~MATCH #5~
ROH World Tag Team Champion reDRagon (Bobby Fish & Kyle O’Reilly) defeat Outlaw Inc. (Eddie Kingston & Homicide) to retain the titles at 15:07. Fish and O’Reilly have been the Champions since 8.17.13, and this is their fourth defense. The Champs beat up Prince Nana before the match, since he was in the ring bragging about how he brought Homicide and Kingston to ROH and they were going to win the titles. That brings the challengers out, and they take the initial control. The Champions survive and take the advantage on Kingston, keeping him away from his partner. The referee completely loses control of this one and things get out of hand. As things continue to deteriorate, the crowd totally turns on the match, booing everything and chanting “This Is Crap.” reDRagon finds a way to hit Homicide with a chair-assisted Chasing the Dragon to get the win. That was a disaster in just about every sense, as Outlaw Inc. looked terrible and they didn’t mesh with reDRagon at all.
Rating: *½

~MATCH #6~
Tommaso Ciampa defeats ROH World Television Champion Matt Taven (w/ Kasey Ray, Scarlett Bordeaux & Truth Martini) at 4:22 to win the title. Taven has been the Champion since 3.2.13, and this is his twelfth defense. Ciampa doesn’t even wait to start the match, as he beats on the Champion without mercy. The House of Truth interferes as much as they can to help Taven take control. Ciampa takes Bordeaux and Martini out, and then locks Taven in the Rings of Honor to win the TV Title. That was an awesome squash, and the crowd popped huge for the win, so they made the right choice here.
Rating: **

~MATCH #7~
Eddie Edwards & BJ Whitmer defeat Jay Lethal & Roderick Strong at 16:19. This is Edwards’ last match in ROH, and his partner was unknown heading into this match. Whitmer is a big surprise, as he had announced his retirement after taking a piledriver on the apron from Michael Bennett. McGuinness says Whitmer came to him and wanted to have one last match, so it’s his last match as well as his partner’s. All four men are respectful of each other, so they have a nice technical tag team matchup. The crowd is with them pretty much the whole way, as everyone is over with this crowd. Late in the match, Whitmer and Lethal fight on the floor while Strong and Edwards exchange chops in the center of the ring. Edwards survives the Stronghold, a Sick Kick, a Gibson Driver, and counters the End of Heartache into a victory roll to get the pin. I don’t much care for that finish, as Edwards got a roll-up after taking three finishers, but the bulk of the match was great fun and well worked.
Rating: ***¼

After the match, Lethal cedes the ring to Edwards, Strong, and Whitmer. Edwards gives a typical “thank you” speech, which is nice. When Edwards thanks Whitmer for teaming with him tonight, Whitmer says “my career is just getting started.” Whitmer throws Edwards into a big knee strike from Strong! Jimmy Jacobs makes his way out and says it makes him sick that people celebrate a man like Edwards, who is walking out on Ring of Honor. He pulls out the Spike and hits Edwards in the face with it! Jacobs says that while a lot has changed in ROH, “The Decade” has been there and they’ve been unappreciated. Awesome angle there and it came off superbly.

~MATCH #8~
ROH World Champion Adam Cole defeats Jay Briscoe and Michael Elgin at 33:39 in a Three-Way Match to retain the title. Cole has been the Champion since 9.20.13, and this is his fourth defense. He tries to avoid his challengers and pit them against each other, but that only works for so long. The action stays fast no matter who’s in control, as all three men can be very offensive-minded. Eventually, Elgin and Jay join forces and take Cole out with a double chokeslam through a table at ringside. The two brawlers get back in the ring and take the fight to one another. Both Elgin and Lethal go through the announce table, and Cole sneaks back in the ring and hopes for a countout. Cole distracts the referee, allowing Matt Hardy to hit a Twist of Fate on Jay, but when Hardy tries it on Elgin it gets countered. Bac in the ring Cole lands a superkick and the Twist of Fate, but it only gets two! Cole puts on a Rear Naked Choke. Mark Briscoe runs out to fight Hardy off, and Jay gets involved in that skirmish as well. Elgin counters a Panama Destroyer into a Buckle Bomb out onto the Briscoes and Hardy at ringside. He follows everyone out with a somersault dive. Back in the ring Jay hits a Jay Driller on Elgin but it only gets two! Jay hits another one and Elgin kicks out again! Unprecedented. Jay goes for a third, but Cole takes Lethal’s head off with a superkick, and rolls Elgin up to get the pin. That was so much action and they never really slowed own for over 30 minutes. All three men wrestled like top guys and looked like credible World Champions here. The finish was cheap, but the good kind of cheap that makes Cole look like a dick but doesn’t sacrifice credibility.
Rating: ****¼

After the match, Cole and Hardy join forces and attack Elgin, but suddenly, the music of Chris Hero hits! Hero comes out and hits both Hardy and Cole with an elbow smash to knock them out. He announces that he is BACK in Ring of Honor.

JZ Says
Only the Tag Team Title match is a total bummer, and the rest of the card is either solid – very good, and it’s an easy show to get through. The Young Bucks and Adrenaline RUSH nearly stole the show, but the main event also lived up to its billing. Hero coming back at the end also felt like a big deal, as did the formation of the Decade, so there are a few things to look forward to in 2014. Nice job here.