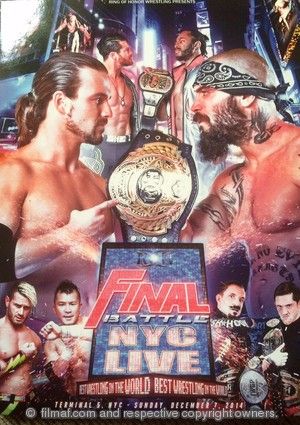 ~PRESHOW MATCH~
Brutal Burgers (Brutal Bob & Cheeseburger) defeat BJ Whitmer & Mikey Webb at 4:07. Whitmer explains that Adam Page is becoming a full member of The Decade tonight, so the “Young Boy” spot needs to be filled. Whitmer gives the opportunity to Mikey Webb. Bob and Webb start the match with some chain wrestling. Whitmer and Webb have some difficulties, but they do work together and make Cheeseburger the face-in-peril. Evans gets a hot tag and swings the momentum back to his side. Cheeseburger gets time to recover, and Bob powerbombs him right on top of Webb, and Bob gets the pin. This was a decent little pre-show match, and I appreciate that they gave it a reason for existing.
Rating: *¾

~MATCH #1~
Hanson defeats Caprice Coleman, Jimmy Jacobs (w/ BJ Whitmer), and Mark Briscoe) in a Four Corner Survival match at 10:44. This is reminiscent of Four Corner Survival matches of yore, with non-stop action and everyone getting a chance to show off their repertoire. Hanson finds an opportunity to take Coleman’s head off with the Spin Kick of Doom and that’s enough to get the win. Fun opener here, with action to spare and the right guy going over.
Rating: ***

~MATCH #2~
Roderick Strong (w/ Jimmy Jacobs) defeats Adam Page (w/ BJ Whitmer and Jimmy Jacobs) by referee decision at 12;06. The veteran Strong dominates the opening minutes, but Page hangs with him and doesn’t appear to have nerves during the biggest match of his ROH career to this point. Whitmer tries to interfere and gets kicked in the face by Strong for his troubles. Strong is dishing out every possible maneuver he can think of, but Page won’t stay down. After a hard-fought battle, Strong connects with The End of Heartache and then locks on a vicious Stronghold. Page won’t tap out, but he does pass out and Strong gets the win. Sometimes ROH is a little bit too careful when they’re trying to build a new star, and this is one of those cases, where a win over Strong here would’ve been well-timed. As it was, this was a good encounter, much like most Roderick matches.
Rating: ***½

~MATCH #3~
Michael Elgin defeats Tommaso Ciampa at 13:21. Neither man wastes any time taking the fight to their opponent, as both are highly aggressive and mentally unstable as of late. Ciampa escapes a delayed vertical suplex by grabbing Elgin by the balls, literally. They continue to batter each other, until Ciampa accidentally clobbers the referee with a clothesline. Nigel McGuinness has put Ciampa on a zero-tolerance policy with violence toward officials, but even he knows that was an accident. McGuinness gets up and walks away from the commentary table, and that allows Elgin to hit a vicious double-arm DDT to get the pin. This storyline never really went anywhere, and I’m never a fan when McGuinness as matchmaker gets too involved in storylines. However, the work was stiff and exciting, as the similar styles these two men have mesh very well together.
Rating: ***½

~MATCH #4~
The Young Bucks (Nick Jackson & Matt Jackson) & ACH) defeat Cedric Alexander & The Addiction (Christopher Daniels & Frankie Kazarian) at 12:43 in a Six Man Tag Team Match. ACH is wearing a BULLET CLUB t-shirt, but he is not a member of the group. I’m surprised they allow that. Both teams waste no time in bringing the action to a fever pitch, as it’s a verifiably offensive-minded matchup from the bell. This is one of those matches where it’s pointless to put any sort of play-by-play together, with non-stop action coming from every direction. The Bucks and ACH trap Alexander alone in the ring and the Bucks destroy him with a Meltzer Driver. ACH follows with a beautiful 450 splash to get the pin. This was all executed well and super exciting. Great example on how to do this kind of match, which WWE could learn for the Cruiserweight Division.
Rating: ****

~MATCH #5~
Moose (w/ Prince Nana & Stokely Hathaway) defeats R.D. Evans (w/ Veda Scott) at 7:34. This is a true physical mismatch, and Moose proves that point a bunch of times, dominating the match. Evans amazingly fights back and gets a couple of near-falls. Moose is selling way too much for him. Scott get in the ring under the guise of helping Evans, but she kicks him in the nuts instead. Moose follows with the Spear to get the pin. That seems like a lot of protection for Evans; Moose really should’ve crushed him. Plus, I don’t recall this feud ever really being settled or going much of anywhere.
Rating: *

~MATCH #6~
ROH World Television Champion Jay Lethal (w/ Truth Martini & J. Diesel) defeats Matt Sydal at 15:03 to retain the title. Lethal has been the Champion since 4.4.14, and this is his twentieth defense. This is arguably Letha’s biggest test to date. Sydal works hard to build momentum, and Lethal responds by creating separation. #ThingsMichaelColeWouldSay. Sydal tries to work a faster pace, but Lethal has an answer for him for everything he tries. Late in the match, Sydal gets a second wind and lands a perfect Shooting Star Press and Martini pulls referee Todd Sinclair out of the ring to break up the count. Sydal chases after Martini and kicks The Book of Truth back into his face. Sydal goes for a Shooting Star Press on Martini, but Lethal catches him with an Ace Crusher! One Lethal Injection later, and Lethal retains the TV Title. I certainly liked this match, but the lazy finish takes some points away. But still, these two are at a point where it would be very hard for them to have a bad match with anyone, let alone each other.
Rating: ***¼

~MATCH #7~
ROH World Tag Team Champions reDRagon (Bobby Fish & Kyle O’Reilly) defeat Time Splitters (Alex Shelley & KUSHIDA) to retain the titles at 18:09. Fish and O’Reilly have been the Champions since 5.17.14, and this is their eleventh defense. It’s a feeling-out process to start, with all four men taking turns in the ring, trying to set the tone. The challengers accomplish this first, isolating O’Reilly for a several minutes. They focus on the arm, but O’Reilly survives and make a tag. reDRagon spends their time working on Shelley. Things break down, as they tend to do in ROH, and the action reaches a fever pitch. KUSHIDA takes a huge amount of punishment be he fights on, even kicking out of Chasing the Dragon! O’Reilly grows weary of his insistence and traps him in a vicious Cross Armbreaker to finally get the tap-out. Hot action all throughout the match topped by a clean finish, what more can you ask for from two great teams?
Rating: ****

~MATCH #8~
ROH World Champion Jay Briscoe defeats Adam Cole at 21:19 in a Fight Without Honor. Jay has been the Champion since 9.6.14, and this is his fourth defense. The two hated rivals take it right to each other, and Jay almost scores an early pin with a Jay Driller! It’s quite rare that anyone kicks out of that one. The battle quickly spills to the floor, where a table, a chair, and a staple gun (ow) are used. Cole uses a kendo stick to bust open Jay’s head. He goes for a ring-post figure-four, but Jay pulls him face fist into the ring post. Cole is busted open now as well. Medical personnel come out to attend to Cole’s cut, but Jay will have none of that. The fight continues, and Jay spreads a bag of thumbtacks over the ring. Cole gets furious and pours a handful of them into Jay’s mouth and hits a vicious superkick for two! Jay fights back and hits a back body drop onto the thumbtacks and a Jay Driller on the tacks but Cole kicks out! One more Jay Driller, this one on top of the ROH World Title belt, is enough for Jay to get the pin. That’s a great finish to this feud, and it capped off a very good, very violent match. Bur it wasn’t just violence for the sake of it – they gave it meaning and purpose and built to the finish very well. These two are great opponents.
Rating: ****

JZ Says
Three four-star matches on an eight-match card is enough to make a recommendation, and that’s what this show has. Also, all three of the matches were very different, and a variety of great matches is better than the same type of great match. In addition, two more matches clocked in at 3.5 stars, and only two matches (one on the preshow) dipped below that, so this is an easy show to recommend.