Typhoid Mary Is Back To Bring The Pain?! 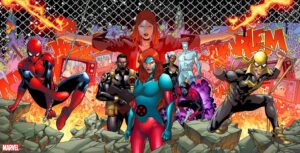 CV had the scoop.