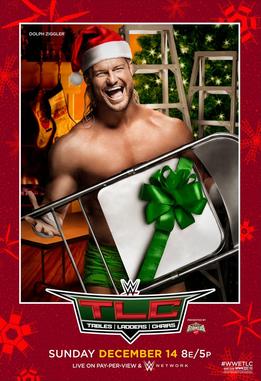 ~KICKOFF MATCH~
The New Day (Big E & Kofi Kingston (w/ Xavier Woods) defeat Goldust & Stardust at 11:00. It’s hard to remember a time when New Day was so not over that they were relegated to the preshow. They work the tag team formula as the idiots on commentary talk about The Great Gazoo way more than is necessary. Gold and Stardust keep Kingston isolated in their half of the ring. This goes on for a while, and then Big E gets the hot tag. New Day cleans house and hits Stardust with the Midnight Hour to get the pin. Perfectly solid preshow stuff here.
Rating: **½

~MATCH #1~
Dolph Ziggler defeats Intercontinental Champion Luke Harper at 16:42 in a Ladder Match to regain the title. Harper has been the Champion since 11.17.14, and this is his fourth defense. Harper uses his size and power to control the early part of the match, using both traditional and ladder-based offense. He even hits a suicide dive to the floor, taking a terrible landing on his arm. Both men continue to abuse each other, with Ziggler taking a particularly hellacious beating. Finally, with both men up on ladders, Ziggler hits Harper perfectly with a superkick to knock him down. That’s enough for Ziggler to pull down the belt. While they didn’t reach classic status, they certainly took a lot of punishment for our amusement and the crowd was invested in their hometown boy Ziggler, so this was a great choice for an opener. And after busing their asses to put on a show, Harper and Ziggler were rewarded with, well, nothing.
Rating: ***¾

~MATCH #2~
The Usos (Jey Uso & Jimmy Uso) defeat WWE Tag Team Champions The Miz & Damien Mizdow by disqualification at 7:16. Miz and Mizdow have been the Champions since 11.23.14, and this is their second defense. The crowd here cares only about Mizdow. The Usos dominate the match, working over Miz while Mizdow engages in shenanigans. After that goes on for a while, Miz gets frustrated and hits one of the Usos with a Slammy Award for the disqualification. This was a big bowl of nothing, with a terrible finish.
Rating: *½

~MATCH #3~
Big Show defeats Erick Rowan at 11:13 in a Stairs Match. The gist here is that the stairs are a legal weapon, but how many times have you seen stairs used and how many times have you seen someone get disqualified for it? I notice something about Rowan in this match – he’s terrible. They try to get creative with the stairs, but that’s easier said than done. After what feels like forever, Show hits a Chokeslam on the stairs, then lands a knockout punch to the back of the head. Show uses the stairs to help pin Rowan. Cole says this was a “tremendous matchup” but he’s lying through his teeth. This was awful.
Rating: ½*

~MATCH #4~
John Cena defeats Seth Rollins (w/ Jamie Noble & Joey Mercury) in a Tables Match at 23:33. Cena has plenty of fire in the early going, but interference from J&J Security plays a big factor in Rollins taking control. When Cena starts to fight back, Noble and Mercury straight up get in the ring and turn this into a handicap match. They take the fight outside the ring, where Cena counters his trio of adversaries long enough to take Mercury and Noble out of the equation. Back in the ring the battle continues, and eventually Cena puts Rollins through a table with an Attitude Adjustment, but the referee had been knocked out, so he didn’t see it. Mercury and Noble return, and this time Cena gives them a simultaneous AA through a table to hopefully eliminate them for good. Cena and Rollins fight on the apron and both try to throw the other through two tables at ringside, but they land at the same time. Referees disagree about who won, so the match will restart! As Cena and Rollins fight some more, Big Show makes his way down, and as he gets ready to chokeslam Cena, the music of Roman Reigns hits! Reigns comes through the crowd and hits Show with the Superman Punch and then spears him through a table. Rollins takes the next Superman Punch, and that allows Cena to put Rollins through a table with an AA to get the win. Rollins and Cena always work well together and some of it was good, but this match was a total cluster. In addition to the tons of interference, I must say that almost three years later I have no memory of why Show and Reigns would be involved. Big disappointment here.
Rating: **¾

~MATCH #5~
Divas Champion Nikki Bella (w/ Brie Bella) defeats AJ Lee to retain the title at 7:44. Nikki has been the Champion since 11.23.14, and this is her first defense. Nikki dominates her challenger in the opening minutes, while her sister cheers her on. AJ makes a comeback and gets Nikki in a pinning position, but Brie puts her sister’s foot on the bottom rope. While the official kicks Brie out of the arena, Nikki sprays hairspray in AJ’s eyes and then hits the Rack Attack to get the pin. Decent match, but nothing more than what would be presented on TV.
Rating: **½

~MATCH #6~
Ryback defeats Kane in a Chairs Mach at 9:50. They brawl around… slowly. Both men use a steel chair, as the rules of the match allow for them to do so. The crowd has no f*cks to give about this match. It just keeps going on and on, even after Kane hits a Chokeslam and Ryback kicks out. Ryback comes back with the Meat Hook and Shell Shocked to get the pin. Not as bad as the stairs match, but certainly not good.
Rating: *

~MATCH #7~
United States Champion Rusev (w/ Lana) defeats Jack Swagger at 4:49 to retain the title. Rusev has been the Champion since 11.3.14, and this is his third defense. Swagger attacks Rusev’s previously injured ankle, which is highly convenient for his finisher, the Patriot Lock. A vast majority of this match is one of the guys in the other’s submission finisher, and Swagger loses that battle, tapping out to The Accolade. They only had five minutes to work with, so they did what they could.
Rating: **

~MATCH #8~
Bray Wyatt defeats Dean Ambrose at 26:55 in a TLC Match. This is the type of TLC match where you win by pin-fall or submission. I know they were feuding because of the Hell in a Cell hologram, but I really don’t think there was anything specific that was ever stated for why Bray created the hologram in the first place. Ambrose dominates the early going and introduces kendo sticks for fun. Bray turns the tables by knocking Ambrose off the top rope through a ringside table. That gives Bray the advantage for a good long while, and he abuses Ambrose in a variety of ways. It takes some time, but Ambrose eventually comes back and the fight up the aisle amongst the various tables, ladders, and chairs décor. They get back to the ring and trade control back and forth some more. Ambrose finds a TV under the ring and admires his visage, before going down the aisle to retrieve an extra tall ladder. Ambrose goes all the way up the ladder and puts Bray through an announce table with a leaping elbow drop. Back in the ring Ambrose tries to hit Bray with the TV monitor he found earlier but it literally blows up in his face. One Sister Abigail later and Bray gets the pin. Okay match with some cool spots but it was way too long, and the finish was profoundly stupid, with the benefit of not helping either guy. The guys worked hard but the booking totally hamstrung them.
Rating: **¾

JZ Says
The opener is a lot of fun, but everything after is either disappointing or terrible, making this a difficult pill to swallow. The Kane and Big Show matches were particularly soul-crushing, and Rollins/Cena and Ambrose/Wyatt were just a letdown. Awful, awful show here.