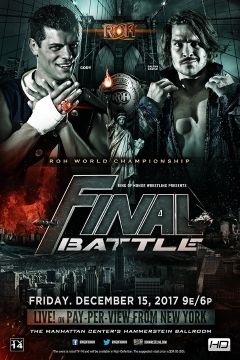 Ian Riccaboni and Colt Cabana are on commentary.

~PRESHOW MATCH #1~
The Dawgs (Rhett Titus & Will Ferrara) defeat Cheeseburger & Delirious). Riccaboni and Caprice Coleman are on commentary here. It’s fun to see Delirious in the ring every so often. The rest of these guys, meh. This follows the tag team formula, with Delirious playing Ricky Morton. Some of the stuff Ferrara and Titus do looks a little goofy, but I like that they’re trying out all kinds of stuff on the preshow, because why not? Delirious plays Ricky Morton, and eventually makes the hot tag to Cheeseburger and he’s flame broiled. The referee loses control and tag rules become merely a suggestion. The Dawgs get Delirious alone and hit him with a spiked gourdbuster to get the pin. This had a lot of energy and was a good execution of tag formula. I didn’t expect to like this.
Rating: ***

~PRESHOW MATCH #2~
Jonathan Gresham defeats Josh Woods. Riccaboni and Coleman on commentary again. Woods was the 2017 Top Prospect Tournament winner. They shake hands to start and immediately start chain wrestling. Both guys do some cool stuff, but Gresham is a little bit quicker and he uses that to his advantage. When Woods can utilize more strikes, he’s’ much more successful. In the end, Gresham utilizes a beautiful cradle to keep Woods down for the three-count. I really liked this a lot. Both men got a chance to shine and worked well with each other. Great preshow match.
Rating: ***¼

~MATCH #1~
Matt Taven (w/ TK O’Ryan & Vinny Marseglia) defeats Will Ospreay at 10:58. Both men hit dives to the floor within the first 1130 seconds of the match. Startin’ off hot tonight! Back in the ring the pace stays quick as Ospreay gets the crowd hype. Taven distracts the referee, allowing O’Ryan and Marseglia to interfere, a lot. Taven controls a bulk of the action, keeping Ospreay grounded and fighting off his aerial attacks. Ospreay gets a nice flurry of offense towards the end, but Taven catches him with the Climax to get the pin. This was probably the right choice to open the show, as Ospreay always riles up the crowd, and Taven gets a big win by going over him mostly clean.
Rating: ***

~MATCH #2~
War Machine (Hanson & Raymond Rowe) defeat The Addiction (Christopher Daniels & Frankie Kazarian) at 9:35. These teams have battled each other for a while now, so they’re ready to fight without the usual feeling-out process. War Machine controls the early going, but the crafty veteran team of Daniel and Kazarian use their knowledge and wiles to take control. The referee is very lenient with his five-count here. In the end, War Machine tap Daniels in the ring alone and hit Fallout to get the win. Good action, clean finish. I’ll take it.
Rating: ***¼

~MATCH #3
Jay Lethal defeats Marty Scurll at 15:55. Scurll challenged Lethal to this match and tried to goad him into bringing back more of his heel tactics. Both men wrestle with aggression in the early going, and successfully give the impression that they straight up do not like each other. That usually makes for a good time. They alternate fighting inside and outside the ring, and they keep the crowd with them either way. Scurll attacks Lethal’s arm to set up for the Crossface Chicken Wing. The referee gets knocked out of position and Scurll brings a chair in the ring. Scurll tries to pull an Eddie Guerrero, but Lethal one ups him by wrapping the chair around his head and laying down before referee Todd Sinclair turns around. Sinclair questions Scurll, but they just get rid of the chair and pretend it didn’t happen. Scurll then introduces an umbrella, and when the referee gets rid of it, he pulls out a second one and hits Lethal with it behind his back. After more umbrella shenanigans, Lethal kicks Scurll low. Lethal then hits the Lethal Injection to get the pin. Terrific match here and a great dynamic between them. Scurll could’ve used the win here, but it gives them something to come back to and I like that too.
Rating: ***¾

~MATCH #4~
ROH World Tag Team Champions The Motor City Machine Guns (Alex Shelley & Chris Sabin) defeat Best Friends (Beretta & Chuckie T) at 10:20 to retain the titles. The Guns have been the Champs since 9.22.17, and this is their seventh defense. They start off with a lot of cute spots sprinkled in with fast-paced action in and out of the ring. After furious non-stop action, Sabin traps Beretta in a jackknife cradle to get the flash pin. That was mostly enjoyable, but nothing really went anywhere, and the finish was weak.
Rating: **¾

~MATCH #5~
Silas Young (w/ The Beer City Bruiser) defeats ROH World Television Champion Kenny King, Punishment Martinez, and Shane Taylor in a Four Corner Survival Elimination Match to win the title at 17:25. King has been the Champion since 9.22.17, and this is his sixth defense. They start off slowly, with all four men trying to establish a rhythm early on. The crowd gets pretty hype for Taylor and Martinez to fight. Taylor is the first to go, after King hits him with a Royal Flush, and Martinez follows with Asai Twisting Senton to get the pin. King and Young work together for a bit on Martinez, but when Young gets the opportunity, he hits King in the head with a beer bottle behind the referee’s back to eliminate the Champion. Martinez looks poised to eliminate Young after a South of Heaven Chokeslam, but Bruiser pulls Young to the floor to avoid getting pinned. With a bit of help from the Bruiser, Young gets Martinez in Misery to score the pin and win his first title in ROH. Tons of action here and a good showcase for four guys ROH should figure out how to elevate.
Rating: ***½

~MATCH #6~
The Briscoes (Jay Briscoe & Mark Briscoe) defeat Bully Ray & Tommy Dreamer at 16:30 in a New York Street Fight. Bully and Dreamer come in from the crowd and it’s a big brawl outside the ring right away. The crowd LOVES Tommy Dreamer and ECW here. They mix in some “comedy” spots in with the usual hardcore stuff. Bully gets busted open. Eventually, Bully gets laid out on a table and Mark hits the Froggy ‘Bow to get the pin. Typical hardcore stuff but it got the crowd going and added variety to the card, so I don’t hate it.
Rating: **½

~MATCH #7~
ROH World Six-Man Tag Team Champions The Hung Bucks (Hangman Page, Matt Jackson & Nick Jackson) defeat Dragon Lee, Flip Gordon & Titan at 15:11 to retain the titles. Scorpio Sky joins the commentary team for this one. Page and the Bucks have been the Champions since 8.20.17, and this is their seventh defense. They’re held under “Bullet Club Rules” though, so several different trios have combined for those defenses. This should easily be the fastest-paced match this evening. The champs slow it down a little but, but there’s always something happening. The focus of this match seems to be getting Flip Gordon over, which seems to be working. As predicted, this one is non-stop action with a hot crowd getting into everything. In the end, the Hung Bucks capture Gordon and Titan in the Indie-Taker/Rite of Passage combo to get the pin. This was a lot of fun to watch, but Gordon’s partners seemed entirely inconsequential, which is a shame.
Rating: ***½

After the match, Sky goes to check on his friend Gordon, but then The Addiction come running out and they take out the Hung Bucks. Sky then turns on Gordon.

~MATCH #8~
Dalton Castle (w/ The Boys) defeats ROH World Champion Cody (w/ Brandi Rhodes) at 12:55 to win the title. Cody has been the Champion since 6.23.17, and this is his seventeenth defense. Castle has the early advantage, countering all of Cody’s attempted attacks. Brandi interferes to give her husband control of the match. They fight outside the ring, and Cody powerbombs Castle through one of the ringside tables. Cody tries to use a chair and one of The Boys pulls the chair out of his hands. Brandi then climbs to the top rope and takes out both Boys with a flying body press! The referee then ejects Brandi and both Boys. Castle comes back an rams Cody into the barricade, busting him open. Cody is bleeding heavily here. Late in the match, referee Todd Sinclair gets knocked out, and Castle traps Cody in a submission right away. Unfortunately, the referee does not see Cody tap out. Cody hits Cross-Rhodes, and Castle kicks out! Castle comes back and hits the Bang-A-Rang to get the pin! Dalton Castle is the ROH World Champion! The crowd pops huge for that, since they love Castle and a title change was not widely expected here. Like most of Cody’s matches, the buildup was good, and the heat was great, but the match was just so-so.
Rating: ***

JZ Says
A memorable main event caps off a very enjoyable show with very few low points. Nothing reached a special level of “must-see,” except Castle winning the ROH World Title, of course.