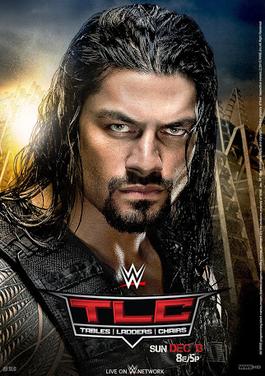 ~KICKOFF MATCH~
Sasha Banks (w/ Naomi & Tamina) defeats Becky Lynch at 11:42. The women are still being called “divas” at this point, which already sounds weird so they’ve done a good job scrubbing that term. They battle back-and-forth in the early going, showing how well they know each other from their NXT days. Banks takes control before the stupid commercial break, and we come back to Banks putting on a version of the Bank Statement. Lynch escapes that and unloads a flurry of offense. When Lynch gets a little too close to winning, Team B.A.D. springs into action, one distracting the ref and the other distracting Lynch. That allows Banks to hit the Backstabber and lock on the Bank Statement to get the win. Banks’ hometown crowd pops big for that. Good match here, lazy finish.
Rating: ***

~MATCH #1~
WWE Tag Team Champions The New Day (Big E & Kofi Kingston, w/ Xavier Woods) defeat The Lucha Dragons (Sin Cara & Kalisto) and The Usos (Jimmy Uso & Jimmy Uso) at 17:45 in a Triple Threat Ladder Match to retain the titles. New Day have been the Champions since 8.23.15, and this is their fifth defense. This one should be filled with fast-paced action and lots of offense from all three teams. That’s exactly what we get, and the crowd digs it. All six men take inordinate amounts of punishment, while Woods and Francesca get the best seat in the house to just observe and taunt. The precision involved with executing and selling these moves is going very well for all three teams. Kalisto steals the show by delivering a Salida del Sol from the top of a ladder through a ladder bridge on Jimmy Uso. That was simply breathtaking. When Kalisto recovers, he finds himself alone with room to climb the ladder. Woods sees the titles slipping away and he hurls Francesca at Kalisto to stop him, and then Kingston knocks him down to the mat. Kingston climbs up and grabs the titles to retain for New Day. That was incredible, non-stop action with everything hitting and the crowd reacting right along with them. What an awesome showing by all six men.
Rating: ****½

~MATCH #2~
Rusev (w/ Lana) defeats Ryback at 7:58. This a true hoss battle!” – Jim Ross, probably. Ryback does his usual boring stuff, and Rusev was pretty limited here, both in move-set and personality. Apparently Rusev gets bored too, because he tries to leave but Ryback won’t allow it. Lana pretends to get knocked over by Ryback to distract him, so Rusev can hit the Macha Kick. Back in the ring that only gets two. Rusev stomps the back and puts on The Accolade, causing Ryback to pass out. Of course, Ryback wouldn’t tap. Match was a fine idea for putting Rusev over, but not particularly engaging beyond that.
Rating: **

~MATCH #3~
United States Champion Alberto Del Rio defeats Jack Swagger in a Chairs Match at 11:18 to retain the title. Del Rio has been the Champion since 10.25.15, and this is his first defense. All chairs are legal and you win by pin or submission. They threw this together at the last minute and had Del Rio hit Swagger with a chair on RAW to set this up. Both men are aggressive to start, and neither are shy about incorporating chairs into their attack. Del Rio in particular uses a lot of chair shots to wear down his challenger. Swagger fights back and locks on a chair-assisted Patriot Lock! Del Rio reaches the ropes. The challengers have willed the crowd into this one, and they’re chomping at the bit to see Swagger win the belt. Unfortunately, it’s not to be. Del Rio gets a few chairs laid out on the mat, right in perfect position for him to hit the Warrior’s Way and send the back of Swagger’s head into the chairs. Del Rio gets the pin. Much better match than I expected here, and the chair shots were vicious.
Rating: ***

~MATCH #4~
The Wyatt Family (Bray Wyatt, Luke Harper, Erick Rowan & Braun Strowman) defeat Rhyno, The Dudley Boyz (Bubba Ray Dudley & D-Von Dudley) & Tommy Dreamer in an Elimination Tables Match at 12:26. This is all brawling, whether inside or outside the ring. Weapons come into play immediately, but nothing seems to work against the monstrous Strowman. You could even say he’s a monster among men. The first elimination comes when the Dudleys hit Rowan with a 3D through a table at 4:10. Next to go is Rhyno, as Harper delivers a boot to the face with table crushing ferocity at 6:25. Bray delivers a uranage slam through a table to D-Von to eliminate him at 8:26. Bubba and Dreamer bury Strowman under a pile of tables, but then Dreamer gets in the ring and runs right into a Black Hole Slam by Harper. Dreamer rolls to the floor and Harper follows him out with a dive and breaks a table, so Dreamer is gone at 10:41. Bubba teases lighting a table on fire, but the three-on-on disadvantage gets to him. Strowman delivers a chokeslam through a table to get the win for the Wyatt Family. This moved along well enough and didn’t really have any dead spots. Nothing spectacular, but the Wyatt Family looked strong for a change.
Rating: **¾

~MATCH #5~
Dean Ambrose defeats Intercontinental Champion Kevin Owens at 9:53 to win the title. Owens has been the Champion since 9.20.15, and this is his fourth defense. Ambrose gets a small flurry to start, but Owens quickly takes over and grounds his challenger. The Lunatic Fringe fights back and takes advantage out on the floor, but Owens quickly cuts him off again. Owens throws Ambrose into the barricade and hits a senton splash. He dumps Ambrose into the timekeeper’s area and hopes for a countout. Ambrose makes it back in before the count of 10, and he’s got a second wind in him. At the end of a series of reversals, Owens tries the Pop-Up Powerbomb, but Ambrose counters with a hurricanrana into a cradle to get the pin and win the title. Solid match, but it felt a bit pedestrian given what they’re both capable of.
Rating: **½

~MATCH #6~
Divas Champion Charlotte (w/ Ric Flair) defeats Paige at 10:38 to retain the title. Charlotte has been the Champion since 9.20.15, and this is her fourth defense. She cheats to gain the early advantage, and when Paige fights back she shows off her Flair Flop. That’s cute but I’m glad she doesn’t do it anymore. Ric interferes to help keep his daughter in control of the match, and he even plays into the finish. Paige gets the big comeback and hits the Ram-Paige, but Ric gets Charlotte’s foot on the bottom rope to avoid the pin. The ensuring argument allows Charlotte to remove the middle turnbuckle pad, and she rams Paige’s face into it, and that’s enough to get the pin. Serviceable match with a somewhat lazy finish here, as these two just never really clicked in the ring.
Rating: **½

~MATCH #7~
WWE World Heavyweight Champion Sheamus defeats Roman Reigns at 23:55 in a TLC Match to retain the title. Sheamus has been the Champion since 11.22.15, and this is his second defense. Both men come out of the blocks swinging, landing plenty of big shots early on. They fight to the floor and all of the plunder is quickly brought into the fray. Both men endure a bunch of brutal shots, as they have to fight the crowd to keep them from chanting things like “We Miss Rollins.” Yikes. Reigns and Sheamus work really hard and hit a number of devastating looking bumps to try and win them over, and they succeed to some degree. When Reigns looks like he’s got a clear shot to the title, Rusev and Alberto Del Rio run out to help their League of Nations compatriot. Through all the distractions, Sheamus hits Brogue Kick to put Reigns down, and Sheamus climbs the ladder to retrieve the title. The match was good, with a solid escalation of spots, and I don’t envy them for going out in front of that crowd. But NO ONE wanted to see Sheamus win this.
Rating: ***¼

After the match, Reigns goes crazy and destroys the League of Nations with a chair. Triple H and a gaggle of officials try to restore order, but Reigns destroys the COO with a chair as well, while Stephanie McMahon screeches from ringside.

JZ Says
The Kickoff match and the Chairs match are both enjoyable, the main event is both solid and a curiosity, and the opener is amazing, so I’d have to call this a recommended show. Nothing is actively bad here, and in the good old days of three-hour pay-per-views, this show felt like it flew by.