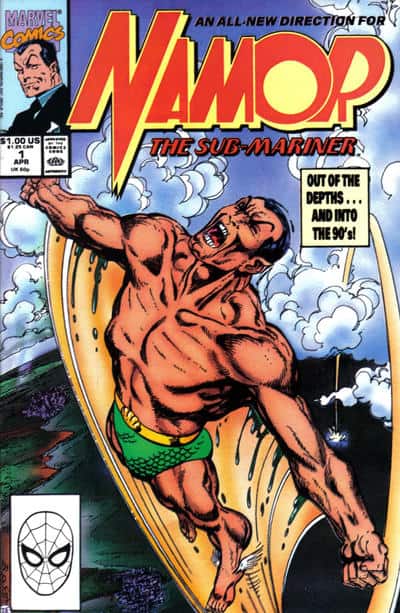 Spoilers (from twenty-six to twenty-eight years ago)

John Byrne is one of my all-time favourite comics creators.  He was the first artist whose work I could recognize immediately, and his runs on Alpha Flight and Fantastic Four were elemental in developing my love of comics as a child.  I followed his career after that in two directions, working backwards to pick up his X-Men comics, and forwards into just about anything he did afterwards (although my She-Hulk and Action Comics collections were a little spotty).  I was right there for his Next Men, and even put up with his return to DC, with his overly toothy Wonder Woman, and his awkward Generations miniseries, before abandoning him when he started doing retcon books at Marvel. Still, he’s someone I’ve always respected (if not really liked, as the Internet era made it easier to learn about creator’s personalities).

His Namor has long stood out for me as a special run.  He took one of Marvel’s oldest characters and tried to apply some logic and continuity to his history.  He worked on Namor’s difficult personality, and helped make sense of the fact that he is sometimes used as a villain, and other times as a hero.

To that, he added an environmental and corporate sensibility that I found interesting and inspiring as a kid.  I am not sure how this book stands up today, but I’m looking forward to returning to it and finding out.

Issue twenty-five was not the end of Byrne’s run as a writer, but it was the last issue that he drew, and seems like a good place to end this column, especially as it sets up a new status quo for the series.

I remembered these comics as being a lot tighter than they were on this second read-through.  The first year or so of this series is pretty good, but as the comic became more concerned with Iron Fist, K’un-L’un, and retconning a lot of continuity there, I felt like I could hear the train slipping off the tracks.

Early on, Byrne played with the cool idea of having Namor be a captain of industry, although it was never all that clear just what Oracle Industries was about, or what, if any, role Namor played in it.  Like many other superhero businessmen, Namor never seemed to do any actual business (at least Bruce Wayne attends a board meeting every few years). Likewise, his corporate enemies, the Marrs twins and Headhunter, also didn’t seem to actually do a lot of work, but I guess that’s just a comics trope in this era.

Also very unclear is the role that Namor plays in Atlantis.  When he shows up to deal with the clone of his dead wife, he is treated like he’s the king, but surely that role would bring some responsibilities with it, wouldn’t it?  And, as soon as that plotline was finished, Namor was gone again, and the undersea civilization was left to its own devices (my guess is they probably moved again, since that’s what they always do).

The longer this title ran, the more it felt like it was circling back on itself.  Iron Fist returns, and turns out to be the Super Skrull. Tyrone King returns, and turns out to be Master Khan.  I’m not sure where the Iron Fist obsession came from, or why anyone would have thought that Namor’s solo book would be a good place to resolve it.  I don’t know if Byrne just had huge problems with the way Priest finished off Power Man and Iron Fist, or if he just wanted to draw Misty Knight a lot, but for a small stretch, Namor was really a secondary character in his own comic.

I know that in the 90s just about every comic needed to feature appearances by Wolverine and the Punisher, but these two characters were used very poorly here.  Logan spent weeks in thrall to the H’ylthri, and was then just teleported away? There is no reason to have him here, especially since he showed up on the cover only once, and therefore couldn’t have provided much of a sales boost.  The Punisher also never showed up on a cover, and we never learned what came of his conversation with Phoebe Marrs.

In fact, Phoebe herself just kind of got written out of the book, as did Caleb and Carrie Alexander.  The potential love triangle plot just fell by the wayside, as did the Marrs siblings’ plotting against Namor (which never had a tangible reason behind it).  We also never saw the original Human Torch, who was offered a job at Oracle, again.

Similarly, odd plot points, like Namor losing his ankle wings, or taming the Griffin, also just happened and never really got discussed after that.

I suspect that Byrne was forced to alter his plans for the series, but am not sure to what end.  If there was a planned Iron Fist series, it never happened. In many ways, I can’t figure out what the point of this series was.  Namor’s character isn’t worked on all that much – we don’t get to see new sides of him, nor do we see him particularly challenged.  The novelty of him being more engaged in the surface world never really goes anywhere.

I do like that Bryne revived Jacqueline Crichton (although it’s not clear why she left her life in England to work for Namor), and didn’t mind all that much that he complicated Namorita’s backstory (even if it was kind of unnecessary).  Clearing up Namor’s legal standing within the US was something that needed to happen, as was the invention of Caleb’s theory as to why Namor is so frequently irrational (even if his findings that Namor needs to balance his time in and out of water was never taken anywhere or mentioned more than twice).

Taken individually, these are entertaining comics.  Byrne is a good comics writer, and a terrific artist, so just about anything he attempts is going to work for a while.  It’s looking at these books as a whole that starts to show how slight and unfocused they were. Byrne’s art changed over the course of these books (and while that can’t be blamed on an inker, as Byrne inked most of them himself, when someone like Bob Wiacek filled in on inking, the change was made more apparent).  I think that the pressure to “Image” up his art to appeal to readers was coming down on him, and I wonder if that’s why the decision was made to hand the art over to the young Jae Lee, and to take the title in a more “extreme” direction.

Anyway, we will look at those issues the next time around, and check to see how many (if any) of these dangling plotlines got resolved.

If you’d like to read any of the stories I talk about here, you can follow these links for trade paperbacks that feature them.