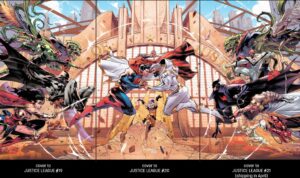 That sure looks like the Earth 2 Batman, but Mister Mxyzptlk may well have more cards and surprises up his sleeves!