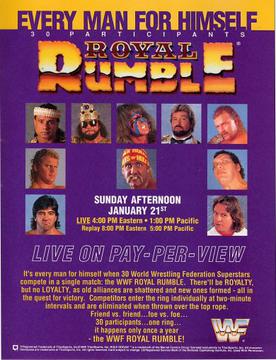 Tony Schiavone and Jesse “The Body” Ventura are on commentary.

MATCH #1: The Fabulous Rougeau Brothers vs. The Bushwhackers

The Rougeaus are accompanied by their manager Jimmy Hart. The match starts with stalling… lots of it. Luke and Butch bring their brand of comedy, which I loved when I was a kid. The capacity crowd in Orlando apparently agrees with the younger version of me because the Bushwhackers are crazy over here. The Rougeaus ground Luke and they keep him in their half of the ring. The Bushwhackers’ offense consists primarily of biting. After what seems like an eternity Butch gets the hot tag. The referee loses control as all four men are in the ring. Hart tries to help his charges and he almost pays dearly for it but the Rougeaus rescue him at the last minute. Finally, the Bushwhackers hit both Jacques and Raymond with the Battering Ram at the same time and Butch pins Jacques at 13:35. That felt like it was never going to end.
Rating: ¾*

MATCH #2: The Genius vs. Brutus “The Barber” Beefcake

If I’m not mistaken, this is the Genius’s only match ever on pay-per-view. Genius is SO good at being effeminate it’s hard to believe that he’s Randy “Macho Man” Savage’s brother. Beefcake dominates in the early going and Genius stalls and tries to avoid him. Genius tries fighting up, but Beefcake has an answer every time he does. Beefcake tries the Sleeper, but Genius fights out of it and puts on a headlock, and when Beefcake shoves him off, Genius collides with the referee, who tumbles to the floor. With the referee out Beefcake locks on the Sleeper, and the Genius starts sawing wood. Beefcake grabs his scissors and preps Genius for a haircut. Mr. Perfect runs out to save his manager and the referee wakes up to call for the disqualification at 11:03. Perfect assaults Beefcake with a chair as referees come out to pull him off. As a setup to Beefcake versus Perfect at WrestleMania VI this worked, but as a match it was dull and today would be the kind of thing on TV instead of pay-per-view. The official verdict is a double-disqualification, by the way.
Rating: *

Valentine is accompanied by his manager Jimmy Hart. Neither man gets an entrance, which I find odd. I believe this is the first submission match on WWE pay-per-view. Both men are wearing braces no their leg, which allegedly make their finishing moves, the Figure-Four Leglock and the Sharpshooter, more effective. Garvin goes on offense first and tries a cover but of course there are no pins here. Valentine fights back and these two are working snug together. They both keep trying pin covers to really hammer the point home that yes, this is a submission match. Valentine is the first one to go for a submission, locking on the Figure-Four. However, the “Hammer Jammer,” the brace on Garvin’s leg, protects him from feeling the pain of the hold. They continue slugging at each other, and Garvin gets his first submission attempt, the Indian Deathlock. The battle spills to the floor, where they continue to hit each other with stiff strikes. Garvin goes for a piledriver but Valentine reverses to a back-body drop. Back in the ring they knock each other down, and Hart takes the opportunity to pull the Hammer Jammer off Garvin’s leg. Valentine wisely puts on the Figure-Four Leglock, but Garvin turns it over! They roll into the ropes to break the hold. Valentine goes to the rope and Garvin slams him down. Now Garvin removes Valentine’s leg brace, the Heartbreaker! Valentine foolishly goes for ANOTHER pin. Okay guys, we get it. Garvin ties Valentine up in the ropes a la Andre the Giant. Hart tries to interfere, and Garvin brings him in the ring and threatens him with the Hammer Jammer. Valentine tries to sneak up on Garvin with the Heartbreaker, but Garvin turns around and blasts him with the Hammer Jammer! Garvin then locks on the Sharpshooter to get the win at 16:52! The crowd popped big for that. I think this match is underrated, and without the pin attempts late in the match I would have rated it higher.
Rating: ***

Boss Man is accompanied by the “Doctor of Style” Slick. He also has his Corporate theme music instead of Jive Soul Bro, which makes me sad. These two bruisers start slugging at each other right away. Duggan knocks Boss Man to the floor but pays for it when he runs into the ring post. He avoids a charge though and Boss Man runs into the steps, so tit for tit. Back in the ring they continue throwing bombs at each other. Boss Man takes control, trying to keep Duggan down. He even uses a bearhug, but Duggan headbutts his way out of it. Duggan clotheslines Boss Man to the floor and Boss Man gets right back in the ring, only to get caught with mounted punches in the corner. Boss Man fights back with a clothesline. He goes up top but misses a splash. Both men rise and clunk heads and fall. Slick tries to interfere but it backfires. Boss Man then grabs the nightstick and cracks Duggan with it to get himself disqualified at 10:23. That was an okay-ish back and forth power brawl.
Rating: **¼

In a great nod to last year’s Rumble, in which he drew number thirty, “Million Dollar Man” Ted DiBiase has drawn #1. Koko B. Ware is #2, and he comes out to the Piledriver song instead of Birdman. That’s #Blasphemy. DiBiase attacks right away and eliminates Koko before the next entrant can come out. Marty Jannetty is #3 and he comes in guns blazing. Unfortunately, it’s not enough and DiBiase eliminates him. Jake “The Snake” Roberts is #4. This is a confrontation the fans have wanted to see. Roberts is all over DiBiase, hitting him with the short clothesline. Next up at #5 is “Macho Man” Randy Savage and he goes right after Roberts. They double-team Roberts until “Rowdy” Roddy Piper comes in at #6 to even the odds. Warlord is #7 as the brawling continues. A new rule this year is that managers can stay at ringside until their clients are eliminated, so Virgil, Sensational Sherri, and Mr. Fuji are all at ringside. Next up is Bret “Hit Man” Hart at #8. The ring starts to fill up as #9 Bad News Brown makes his way out. Savage eliminates Roberts. Dusty Rhodes is next up at #10, and he goes right after his rival Savage and dumps him to the floor. One half of the World Tag Team Champions, Andre the Giant, with Bobby Heenan, is #11. He immediately tosses Warlord out, and Heenan almost gets into a fight with Fuji. Red Rooster is #12. Piper eliminates Bad News. Unfortunately, Bad News doesn’t take too kindly to that and he pulls Piper to the floor! I guess that counts as an elimination. Piper and Bad News brawl all the way to the back. This year’s lucky #13 is Ax of Demolition. Andre tosses the Rooster and then gets beat on by Ax and Rhodes. Next up is Haku at #14, and he immediately helps his Tag Team Championship partner Andre. Next up at #15 is Smash, so now the Tag Team Champions and their number one contender team are in the ring. Akeem is #16, and eight men total are in the ring. That doesn’t last long as Rhodes eliminates Hart. Seconds later, Demolition works together to eliminate Andre! That’s tremendous. Jimmy “Superfly” Snuka is #17, and he takes Akeem out. Dino Bravo is next at #18. Bravo’s partner Earthquake is #19. Earthquake eliminates Rhodes, and then tosses Ax. Jim Neidhart of the Hart Foundation is next up at #20.

Everyone in the ring wisely decides to gang up on Earthquake and they get him over the ropes. Even Bravo adds a little assist. #21 is the Intercontinental Champion Ultimate Warrior, and the crowd goes ballistic. Warrior immediately eliminates Bravo. Rick Martel is #22. Haku eliminates Smash. Next up is #23, Tito Santana. He goes right after his former tag team partner Martel. How did those two never have a singles match on pay-per-view? Honky Tonk Man is #24 as Warrior, Martel and DiBiase eliminate Neidhart. That seems like a lot for just the Anvil. Warrior finally eliminates DiBiase after about 45 minutes to a big pop. The WWE Champion Hulk Hogan is #25 and the crowd loses it. Hogan eliminates Snuka and Haku. Warrior eliminates Santana. Shawn Michaels comes out at #26 to a big pop as Hogan eliminates Honky. Warrior dumps Michaels and Martel, leaving an epic showdown between the WWE Champion Hogan and the Intercontinental Champion Warrior. They crisscross and clothesline each other. Both men are down, and the crowd went nuts for that. While both men are down Barbarian comes out at #27 and starts picking the bones. “Ravishing” Rick Rude jumps the gun and comes out at #28 well before he should have. Barbarian and Rude try to eliminate Hogan, and for some reason Warrior saves him. Then Rude and Barbarian start eliminating Warrior, and Hogan helps them out. Before he leaves, Warrior gets back in the ring and clotheslines Rude and Barbarian, but not Hogan. That’s weird. Hercules is #29. As we all know, Mr. Perfect is the last man in at #30. Hercules eliminates Barbarian and we’re down to the final four – Hogan, Rude, Hercules, and Perfect. Rude eliminates Hercules. Perfect and Rude try to double-team Hogan, but it backfires and Perfect accidentally eliminates Rude. A weakened Hogan gets hit with the Perfect-Plex, but that of course just gives him the chance to Hulk Up. Hogan catapults Perfect into the ring post and ping-pongs him around the ring before tossing him out for the win at 58:41. That’s an awesome and perhaps underrated Royal Rumble, with tons of talent and some awesome booking throughout the match. I know a lot of people think Mr. Perfect should have won, but as he was on his way to face Brutus Beefcake at WrestleMania VI I don’t think it would have helped him in any significant way.
Rating: ****¼

JZ Says
The main event Rumble Match is great, and still holds up as one of the better Rumbles. The undercard is a mixed bag, but Garvin v Valentine is fun, and Genius v Beefcake at least served a hot angle. Fun show.