As the weather gets colder outside, Arrow Video is putting out four Blu-rays for January that will keep your HDTV hot. First is Willie Dynamite, an overlooked gem from the time when colorful pimps exploded on the screen. Willie Dynamite has got his pimp game tight with a stable of hookers that know how to work a convention center in Manhattan. He knows how to keep the hotel staff happy and doesn’t take gruff from pimps or cops. He cruises the city in a tricked out Pimpmobile that would make Batman jealous. He wears colorful clothes that can be seen from the top of the Empire State Building. Willie Dynamite is big. But sadly jealous fools want to bring him down. This is one of finest films from the era thanks to Roscoe Orman. He’s able to take the character from cold blooded businessman to a redeemable character. Oddly enough Orman would take over the role of Gordon on Sesame Street after this film for the next forty two years. Luckily I didn’t see Willie Dynamite back in 1974 or I’d be messed up seeing this “other side” of Gordon. Now it’s easy to imagine Gordon was making Prairie Dawn hustling the corner by Mr. Hooper’s store. Orman is just so effective in the role of Willie Dynamite you won’t make Sesame Street jokes after the first minute. Director Gilbert Moses would go on to make the Dr. J classic The Fish That Saved Pittsburgh.

Crimson Peak is Guillermo del Toro’s Gothic romance that haunts two continents. Mia Wasikowska plays a woman who is haunted by her mother’s ghost in Buffalo. As if being in Buffalo shouldn’t haunt a person without a ghost being necessary. She gets lured to England by the romantic nature of Tom Hiddleston and his dream of mining a special kind of clay back on his estate. What she doesn’t count on is being stuck with Jessica Chastain and meeting more ghosts. The entire film was shot on 70mm so the Blu-ray picture is sharp and brings out the details of the creepy mansion with shocking secrets. del Toro pumps up the bumps to make Crimson Peak perfect for the long nights that are getting shorter.

Giallo and Gelato night returns with The Forbidden Photos of a Lady Above Suspicion. A wife (The House by the Cemetery‘s Dagmar Lassander) gets bored waiting on her husband (Seven Blood-Stained Orchids‘s Pier Paolo Capponi) and heads out for fun. Things turn ugly quick when a stranger attacks her and tells her that her husband is really a killer. She tries to blow it off, but discovers one of the husband’s co-workers is dead. The attacker returns with more evidence. He also wants to blackmail her too. Susan Scott (The Return of Ringo) plays the wife’s friend who is a bit kinky and turns out to have taken erotic photos with the blackmailer. The film is a bit of headgame as the mystery evolves. This was Luciano Ercoli’s first directorial effort after being a producer on Spaghetti Westerns. Ercoli would also make Death Walks on High Heels and Death Walks at Midnight.

Waterworld is a special film for me. Why? Well it’s not strictly because of the film. After attending a sneak preview, my date propositioned me. That’s right, we melted the polar ice caps and flooded the globe. Isn’t that the whole point of taking a date to a movie? To spend two hours in the dark with the hopes they’ll ask to come back to your place to spend another two hours with the lights down low? Years after this historic event, director Kevin Reynolds dropped by my office at the Moving Image Archive when he was a guest artist. I thanked him for what his film inspired in my life and assured him the $200 million budget was worth every penny. He seemed to appreciate it. I can’t guarantee you’ll have the same level of passionate success watching Waterworld with a date, but Waterworld: Limited Edition includes three cuts of the film so choose wisely. This includes the Ulysses’ Cut that is nearly three hours long with previously censored moments. The film is about a world that’s been flooded by global warming and Kevin Costner (Bull Durham) wants to find the last piece of land that’s rumored to exist. He has to battle Dennis Hopper (Blue Velvet) to find out the truth. This was the most expensive movie of its time and still worth every penny.

Here’s the press release from Arrow Video with details on the bonus features:

Ring in 2019 with a brand new batch of Arrow releases! The festivities begin on January 8th with the release of the blaxploitation classic, Willie Dynamite. While Willie doesn’t have the popularity of your Shafts and Sweetbacks, he certainly has every bit as much swag and star Roscoe Orman delivers a truly dynamite performance.

Also hitting shelves on the 15th of January is The Forbidden Photos Of A Lady Above Suspicion, from acclaimed Italian director Luciano Ercoli. This twisty and winding tale takes viewers through a triangle of friendship, sex and murder. Featuring a brand-new 2K restoration from the original camera negative, Italian & English audio tracks and plenty of special features to keep you busy once the film ends, this is is a must-own for Italian horror fans everywhere.

The month of releases comes to a close on January 22nd with Kevin Costner’s infamous Waterworld. This dystopian tale about Earth being completely submerged in water was notorious for being the most expensive film ever made at the time of its release and wasn’t well received by critics. Time has been much kinder to the film, having since developed a cult following as an action spectacle that isn’t to be missed. This new release features a 4K restoration and three cuts of the film, including the extended US TV cut that runs 40 minutes longer than the theatrical release. 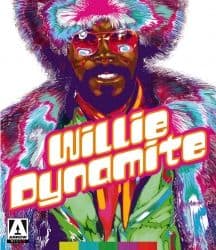 Willie Dynamite
HE’S TIGHT, TOGETHER, AND MEAN. “The hands-down winner of the all-out best blaxploitation movie of the seventies,” declares author and artist Darius James in That’s Blaxploitation! Willie Dynamite may not be as well-known as John Shaft, Sweet Sweetback or Super Fly‘s Youngblood Priest, but he certainly deserves to be. Who is Willie Dynamite? He’s the flashiest pimp in New York – he drives a personalised purple-and-gold Cadillac and wears some of the most eye-catching outfits ever seen on a cinema screen. He wants to be number one, but with the police, the D.A., fellow pimps and a tough-talking social worker on his tail, can a man as arrogant and amoral as Willie D avoid a downfall? Willie Dynamite competes with the best of blaxploitation on all levels. Roscoe Orman dominates with his central performance – a star turn that’s the equal of Richard Roundtree in Shaft or Pam Grier in Coffy. Multi-award-winning director Gilbert Moses balances action and social commentary as deftly as Gordon Parks, Jr. did with Super Fly. And the score by J.J. Johnson featuring Motown legend Martha Reeves is as catchy as anything composed by Isaac Hayes, Curtis Mayfield or James Brown. 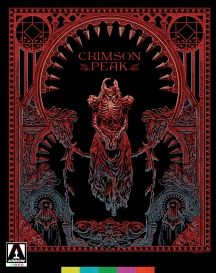 Crimson Peak [Limited Edition Blu-ray]
From the imagination of Oscar-winning director Guillermo del Toro (Pan’s Labyrinth, The Shape of Water) comes Crimson Peak, a lavish, stunningly realized journey into the dark heart of Gothic romance… Beginning in Buffalo, New York, during the 1880s, Crimson Peak stars Mia Wasikowska (Alice in Wonderland, Stoker) as Edith Cushing, an aspiring writer who is haunted by the death of her mother. Edith’s falls in love with seductive stranger Thomas Sharpe (Tom Hiddleston, Avengers Assemble), who whisks her off to Allerdale Hall, his baronial, yet dilapidated English mansion built upon a mountain of blood-red clay. Here Edith meets Lucille (Jessica Chastain, Zero Dark Thirty), Thomas’s sister who at times seems hostile and jealous. As Edith struggles to feel at home in the imposing residence, she gradually uncovers a horrendous family secret and encounters supernatural forces that will help her discover the terrible truth behind Crimson Peak. Boasting incredibly intricate and ornate production design and a rich visual style, del Toro’s film is a grandiose, boldly baroque triumph of Gothic decadence, which expertly combines and contrasts the sublimely beautiful with the shockingly grotesque. Crimson Peak is presented here in sumptuous special packaging, with a wealth of extra features, affording unprecedented insight in to the making of this modern Gothic classic. 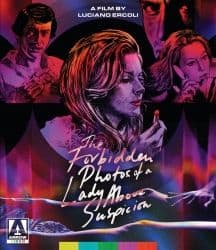 The Forbidden Photos Of A Lady Above Suspicion

Before the influence of Dario Argento’s The Bird with the Crystal Plumage permeated every corner of the giallo genre, another strain of these distinctive Italian thrillers enjoyed considerable success. These “melodrama gialli”, heavily inspired by Clouzot’s Les diaboliques, relied less on graphic violence and high body counts and more on psychological tension. Minou (Dagmar Lassander, Lucio Fulci’s The Black Cat) leads a pampered but dull life with her frequently absent husband, Peter (Pier Paolo Capponi, The Cat O’ Nine Tails). One night, while out walking on the beachfront, Minou is accosted by a mysterious blackmailer (Simón Andreu, Death Carries a Cane) who informs her that Peter is a murderer. Driven by misplaced loyalty to her husband, Minou gives in to the blackmailer’s every perverted whim in exchange for his silence. But as the blackmailer ups the ante, demanding that she submit to his increasingly obscene demands, can Minou hold on to what little remains of her sanity? Written by the prolific Ernesto Gastaldi (Torso), infused with a seductive score by the great Ennio Morricone (The Cat O’ Nine Tails) and featuring a memorable turn by Nieves Navarro a.k.a. Susan Scott (Death Walks at Midnight) in the role of Minou’s best friend, The Forbidden Photos of a Lady Above Suspicion is a trippy giallo delight that brings together the talents of many of the genre’s leading lights on both sides of the camera. 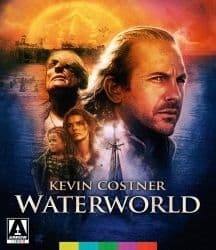 Waterworld [Limited Edition]
The most expensive film ever made at the time of its release, Waterworld has thrilled audiences through the years with its awe-inspiring action scenes, gargantuan maritime sets and ground-breaking special effects.

The most expensive film ever made at the time of its release, Waterworld has thrilled audiences through the years with its awe-inspiring action scenes, gargantuan maritime sets and ground-breaking special effects. A definitive post-apocalypse blockbuster, Waterworld stars Kevin Costner (The Untouchables) as The Mariner – a mutant trader, adrift in a dystopian future where Earth is submerged under water and humankind struggles to survive on boats and in ramshackle floating cities. The Mariner becomes embroiled with the Smokers, a gang of pirates who, led by villainous leader Deacon (Dennis Hopper, Blue Velvet), are seeking Enola (Tina Majorino, Napoleon Dynamite), a girl with a map to the mythical realm of “Dryland” tattooed on her back. Famous for both its epic scale and the controversy that swirled around its production, Waterworld is a key cult film of the 1990s, and an essential entry into the subgenre of ecologically-minded blockbusters. Presented here in an exclusive new restoration, in three different cuts, and with a wealth of extra material, this high-water mark of high-concept Hollywood can now be enjoyed as never before.