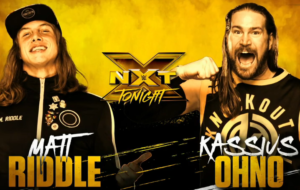 It’s the first episode of the year, which means it’s a two-hour show containing one previously-unseen match, a bunch of recaps of big moments from the past year, and news on the NXT year-end awards. Things start with the majority of the first ever North American Championship Match.

Adam Cole def. EC3, Killian Dain, Velveteen Dream, Ricochet & Lars Sullivan {NXT North American Championship Ladder Match}
This is from my original review of NXT Takeover New Orleans. It’s bizarre for me to see Bateman wrestle as EC3 in a WWE ring, you know, since the C stands for Carter… as in Dixie Carter. This match was a lot of fun. It was a really good character showcase for almost everyone involved, and oddly it was Dream who least got to show off his personality. Still, like everyone else in the match, he did get to show off a few dope spots. ****

They show a clip of Ricochet beating Cole for the North American Championship at NXT Takeover Brooklyn 4. He’s nominated for NXT Breakout Star of 2018, and so are Dakota Kai, Lars Sullivan, Rhea Ripley, Lacey Evans, EC3, Bianca Belair, and the War Raiders. I guess NXT UK is folded into these awards.

They show the promo package for the unsanctioned match between Gargano and Ciampa from New Orleans, and then they give us some of that match in stylized music video form.

Johnny Gargano def. Tommaso Ciampa {Unsanctioned Match}
So the story here is that after losing his first title match to Almas, Gargano put his career on the line to get a second one. Ciampa interfered and caused Gargano to lose, so this match isn’t officially sanctioned. Gargano gets his career back if he wins. I think this is the first time Takeover has been headlined by a non-title match. Heel Ciampa is the best character I’ve seen in wrestling in a long time. He’s an evil pirate and he’s over as a bastard and all of that is fantastic. I think some folks got a little over excited when this match happened because the finish is unbelievably strong. The match is terrific, don’t get me wrong, but so much of what makes it great comes down to that finish. And a million points to Mauro Ranallo, who put the finish into the context of their very first WWE match against each other. And of course, countless points to Gargano and Ciampa for beating the crap out of each other, culminating in a glorious swollen eye on Ciampa. Of course, as Ciampa later pointed out this was the only time that Gargano won in the feud, and since it was unsanctioned it didn’t count. ****¾

They show the finish of the rematch between these two in Chicago. This time around it was a sanctioned street fight, which Ciampa won. Then they go back to New Orleans to show clips of Amsterdam Black’s championship win over Andrade Cien Almas. These two storylines converged in July when Ciampa defeated Black for the title on NXT TV. From there, Black and Ciampa were booked into a three-way match for the title including Gargano. But before that could happen, Black was put out of action due to a parking lot attack. Nikki Cross claimed she knew who’d done it, and eventually told Black that it was an unraveling Gargano. But before they can address more of this spectacular storyline, they take a detour into tag teams.

The nominees for tag team of the year are Oney Lorcan & Danny Burch, the Street Profits, Heavy Machinery, Mustache Mountain, the War Raiders, and the Undisputed Era. Then they show my favorite tag team match of the year, a title match from Takeover in Chicago.

Roderick Strong & Kyle O’Reilly def. Oney Lorcan & Danny Burch {NXT Tag Team Championship Match}
From my original review of NXT Takeover Chicago II. The Chicago ROHbots booed the babyface Lorcan & Burch like crazy before the match and were 100% behind the Undisputed Era. Then something crazy happened: Lorcan and Burch won them over by having the nuttiest tag team match I’ve seen maybe since the Smackdown Six era. I’ve never seen either of the bald dudes before and now I’m all in for Lorcan and pretty impressed by Burch as well. I mean, guys, this is the best tag match in years! Lorcan worked so hard here that his face got shattered and his team is only now starting to regain momentum. *****

The nominees for the 2018 Rivalry of the Year are Gargano vs. Almas, Shayna Baszler vs. Ember Moon, Gargano vs. Ciampa, Undisputed Era vs. Mustache Mountain, Velveteen Dream vs. Ricochet, Black vs. Ciampa vs. Gargano feat Nikki Cross, Baszler vs. Kairi Sane. The entry featuring Black and Cross is stupid, as the real rivalry is Gargano vs. Ciampa and if anything else wins then they should discontinue the awards.

The Newcomer of the Year nominees are Matt Riddle, Mia Yim, Keith Lee, the Forgotten Sons, Candice LeRae, Marina Shafir & Jessamyn Duke, Kona Reeves, Dominic Dijakovic, and Io Shirai. It hurts my soul that Reeves is nominated for anything.

Next up we get some hype for Bianca Belair, who will face Shayna Baszler for the NXT Women’s Championship at NXT Takeover Phoenix.

Bianca Belair def. Deonna Purrazzo
From my review of NXT TV 465. This was taped at Takeover in Brooklyn, but aired a few days later on NXT TV. It started out pretty strong but then fell apart quickly. This was a tale of two Biancas; a competent one up front, and one that didn’t seem to know what she wanted to do for most of the match. *¾

It may not have made the Match of the Year nominees list, but they show a music video of the Gargano vs. Black match from Takeover War Games. It’s a really dope match… that is all. Black won, but a few weeks later Gargano beat Black in a steel cage rematch with the unsolicited help of Ciampa. When asked if he and Ciampa are back on the same side, Gargano was evasive.

Matt Riddle def. Kassius Ohno
Riddle made Ohno tap out at 6:05 with the Bromission. This wasn’t as satisfying as Riddle’s 10-second squash of Ohno at Takeover, and it wasn’t as smooth as Riddle’s win over Punishment Martinez. But it did succeed in both being a fun little stiff bout and in making Riddle look human while not devaluing him in any way. Riddle offers a bro-fist (the world doesn’t need more references to PewDiePie) but Ohno opts to tuck his tail between his legs and sulk his way to the back instead. The crowd chants Brohno, so he comes back and offers the fist… and then he attacks Riddle. He gives a semi-conscious Riddle a sarcastic bro-fist, but a bro in the crowd is correct when he shouts, “it doesn’t count!” **¾