Warning: Use of undefined constant ëtrueí - assumed 'ëtrueí' (this will throw an Error in a future version of PHP) in /nfs/c12/h02/mnt/225260/domains/insidepulse.com/html/wp-config.php on line 102
 WWE NXT UK Review: Episode 21 | Inside Pulse 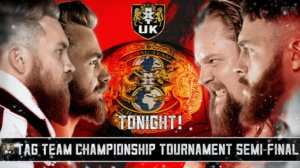 Travis Banks def. Jamie Ahmed
Banks won after hitting the Slice of Heaven. I don‚Äôt rate squashes, but I‚Äôll say that Banks was made to look very dominant here. Not sure we needed all the backstory that the commentators gave us on Ahmed given how little he was allowed to show here. After the match, Jordan Devlin comes out and says he wants to bring his rivalry with Banks (which has spread all over the world) here to NXT UK. He also rips on the New Zealand-based Banks for wrestling so far away from his friends and family. N/A

They replay issues that have been happening between Dave Mastiff and Eddie Dennis for the last two weeks. They‚Äôll fight on the next episode.

Marcel Barthel & Fabian Aichner def. Amir Jordan & Kenny Williams
The European Union (seems more or less their official name based on the commentary) won when they hit a powerbomb/back suplex combo on Jordan. This was billed as a match between two teams who could win a spot in the other semifinal match in the tag title tournament by winning here. Neither team gets that spot, which makes me wonder why they didn‚Äôt just add a quarterfinal round to the damn thing. The match was pretty solid, but Williams & Jordan really got owned here. It‚Äôs a bold move, as they‚Äôd invested some in the dancing duo, but it was the right call to put Aichner & Barthel over. It was also the right call not to call them the Axis, which I‚Äôd feared they‚Äôd do. ***

Deonna Purrazzo tells Toni Storm, completely unfoundedly, that she deserves Storm‚Äôs spot on the upcoming UK Takeover special. Storm says they should have a match so Purrazzo can prove it.

Joe Coffey confronts Johnny Saint & Sid Scala and tells them he wants a shot at Pete Dunne‚Äôs championship at Takeover. Saint miraculously says as many words as Scala as they let Coffey know that they‚Äôll think about it.

Jinny def. Candyfloss
Jinny won after hitting A Touch of Couture. While this was quite awkward at times, it was a lot more watchable than Candyfloss‚Äôs last match for the brand. She got to show her stuff and got a nice response from the crowd. She‚Äôs basically a British version of Blue Pants. Remember Blue Pants?! That said, she probably controlled too much of this match as it was always going to be Jinny going over. **¬º

Tyler Bate & Trent Seven def. Mark Coffey & Wolfgang {Semifinal Match}
Mustache Mountain won when they hit a rebound lariat/dragon suplex combo on Coffey. Funny note: this is Mark Coffey‚Äôs first match since episode 6. NERDY RANT ALERT: I‚Äôve been pretty pissed that the tournament for the tag team titles is only two rounds, but looking back at the short history of this brand showed that the four teams selected had won more matches as teams than anyone else (that‚Äôs still teaming) on the roster. You could even make the case that Mustache Mountain, Gallus, and the Grizzled Young Veterans‚Äô wins on episodes 15, 16, and 17 amounted to quarterfinal matches. But then that doesn‚Äôt account for Mandrews & the Modfather, or the tag match earlier in this episode. Okay, whatever, it‚Äôs a new year and I‚Äôm just embracing this as a storytelling hiccup. Rant over. This match had a fantastic energy. Mustache Mountain played their roles to perfection as usual, and Gallus turned out to be a very worthy foil. Joe Coffey tried to interfere but Pete Dunne came out to neutralize him. The finish felt a little tacked on thanks to the unofficial parties, but other than that I really enjoyed this. The show goes off the air as British Strong Style and Gallus brawl. ***¬Ω