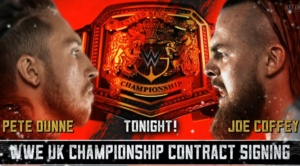 Toni Storm def. Deonna Purrazzo
Storm beat Purrazzo in 9:47 with the Storm Zero. While not a contender’s match, the underlying message from Purrazzo was that she’d injure Storm badly enough that a replacement for the title match would be necessary at Takeover. This was a good showcase for both ladies, though a little one-dimensional. Purrazzo really impressed me in one of her Mae Young Classic matches and hasn’t blown my mind since then. The same can be said of most of the British ladies, though. After the match, Rhea Ripley comes out to try to intimidate Storm. ***

Sid Scala announces that the Grizzled Young Veterans will face Mark Andrews & Flash Morgan Webster in the other semifinal match in the tag title tournament. That makes no sense at all, since the GYV already beat Mandrews & Flash, and the European Union is as yet undefeated. Oh well. Johnny Saint says zero words here.

Mike Hitchman vs. Josh Morrell
Hitchman pinned Morrell in 3:02 with a Superfly Splash. Hitchman is so much less interesting without Primate in his corner. Morrell got to show off a couple fancy flips in the midst of Hitchman getting an inexplicable enhancement win. Not much to see here. *¾

Travis Banks loves New Zealand, despite what Jordan Devlin thinks. He wants to fight the Irishman. Meanwhile, the European Union accosts Sid Scala rightly for not being put in the semifinal match in the tag title tournament. Scala says they’re too new and too into cheating to be in the tournament. I’m pretty happy the inconsistency has been addressed.

Eddie Dennis nc. Dave Mastiff
This went to a no-contest at 4:13 when Dennis and Mastiff gently shoved the referee during a scuffle. That finish was trash, which is especially disappointing as this was actually shaping up to be a notch better than their first match. The wrestlers continue to brawl until Johnny Saint comes out to book them in a non-disqualification match (his words) at Takeover. **

Next week, British Strong Style will fight Gallus in a six-man tag match. That ought to be pretty great.

Saint & Scala bring out Joe Coffey and Pete Dunne to the ring for a championship match contract signing. Both guys are looking quite sharply dressed, but this is serious disconnected-undercut man-but overkill. Coffey thinks Dunne has been champion for too long, and he thinks it’s because Dunne hasn’t defended against Coffey yet. Coffey signs the contract, but Dunne grabs his hand and snaps his fingers. Coffey attacks Dunne from behind and puts him through the table.