Four Weddings and A Funeral was a fantastic date film when it came out back in 1994. The tale of a group of friends romancing a stranger was sophisticated and charming yet not imposing when suggested to your potential night out partner. To celebrate the movie, Shout Select is coming out with Four Weddings and a Funeral: 25th Anniversary Edition. on February 12. The Blu-ray features a fresh transfer of the film to bring out the details on a younger Hugh Grant. Here’s the press release from Shout! Factory with the bonus features: 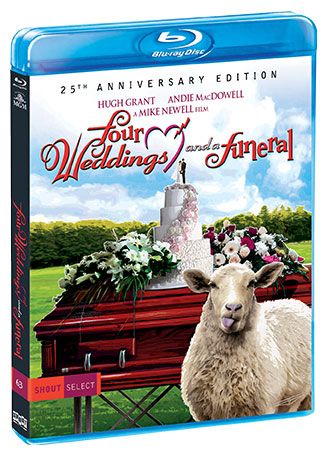 The champagne is flowing — and so is the fun — in this “delightful and sly” (Roger Ebert) tale of true love, unrequited love, and love at first sight.

Charlie (Hugh Grant, Bridget Jones’s Diary) is a charming bachelor and frequent best man at the string of weddings he attends with his friends. Carrie (Andie MacDowell, Groundhog Day) is an enchanting American who catches his eye just as she is about to marry the wrong man.

With a sparkling screenplay from Richard Curtis (Love Actually) and an outstanding ensemble cast, including Kristin Scott Thomas (The English Patient), and Rowan Atkinson (Bean), Four Weddings And A Funeral is a delightfully engaging occasion!