Sometimes you fall for someone who wants more than chocolates and flowers on February 14th. That special someone who has a twisted sense of humor and enjoys watching holiday films that don’t run on the Hallmark Channel. If your love made you watch Black Christmas and New Year’s Evil over the holidays, then you should get them a copy of Valentine: Collector’s Edition for that special night. Here’s the press release from Scream Factory with the bonus features: 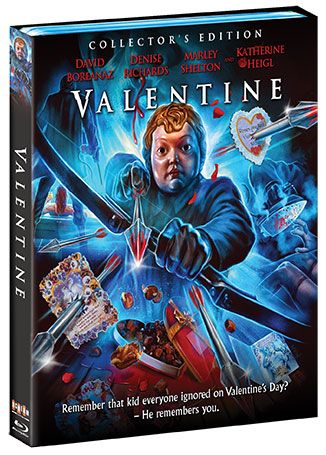 Be my Valentine … or else. Broken hearts and other mortal wounds await a cast of contemporary young stars when they play dating-scene veterans dying for love in this humor-laced, twist-filled thriller cleverly directed by Jamie Blanks (Urban Legend) and starring David Boreanaz (Angel, Bones), Denise Richards (Starship Troopers), Marley Shelton (Scream 4, Planet Terror), Katherine Heigl (Grey’s Anatomy) and more. Cards, candy and flowers are nice. But for fans of stalker-shocker terror, there’s nothing like a Valentine.