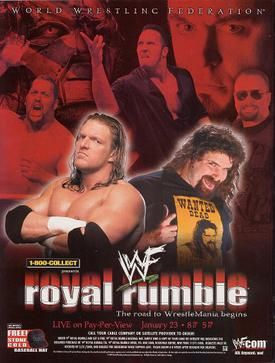 ~MATCH #1~
Tazz defeats Kurt Angle at 3:16. Angle didn’t know who he was facing until the music hit, and the crowd pops huge for the former ECW Champion. Both men are adept at suplexes, so this should be a fun match. Tazz wins the suplex battle and locks Angle in the Tazzmission, choking him out for the win. What a fantastic debut for Tazz, and he would never be booked this strong again.
Rating: **½

~MATCH #2~
The Hardy Boyz (Jeff Hardy & Matt Hardy) defeat The Dudley Boyz (Bubba Ray Dudley & D-Von Dudley) at 10:17 in a Tag Team Tables Elimination Match. Bubba grabs the first table less than a minute into the match. JR confuses which Hardy is which, and that’s always a good time. Both teams get chairs and ladders involved too, a precursor to TLC, if you will. Matt sets Bubba up on a table, and he and Jeff both put him through it with a simultaneous Superfly Splash and Guillotine Legdrop. The ring steps get thrown into the ring and the Dudleys set a table up on them. Matt gets powerbombed through it to even the score. Bubba sets up four tables in the aisle. Jeff and Bubba fight up on top of the set and Jeff nails Bubba with a chair and he falls through the tables. Matt sets D-Von up on a table and Jeff hits a huge Swanton on D-Von to win the match at 10:17. That was amazing for its time and holds up well today as a very fun match.
Rating: ***½

~MATCH #3~
Co-Intercontinental Champion Chris Jericho defeats Co-Intercontinental Champion Chyna and Hardcore Holly at 7:30 to become the undisputed Champion. This was such a weird time for the Intercontinental Title. All three wrestlers work a fast pace here, and the crowd clearly favors Jericho by a wide margin. Chyna eventually uses a chair to knock Holly out, and then she puts on a Boston Crab. Jericho breaks that up with his bulldog, and then he puts her away with the Lionsault to a monstrous pop. There wasn’t much wrong with this match per se, but it also wasn’t particularly inventive or memorable. It was serviceable, and the right guy went over, and sometimes that’s enough.
Rating: **¼

~MATCH #4~
World Tag Team Champions The New Age Outlaws (Road Dogg & Billy Gunn) defeat The Acolytes (Faarooq & Bradshaw) to retain the titles at 2:35. This one gets underway quickly, with brawling both in and out of the ring. The challengers dominate for the most part, and the referee gets pulled to the floor and bumped. X-Pac takes the opportunity to interfere, and the referee wakes up in time to see Gunn hit Bradshaw with the Fame-Ass-Er to get the pin. Well that was certainly brisk. While it lasted it was sloppy and rushed, and not so very good.
Rating: ½*

~MATCH #5~
WWF World Heavyweight Champion Triple H (w/ Stephanie McMahon) defeats Cactus Jack in a Street Fight at 26:48 to retain the title. The buildup to this match is one of the greatest of all-time. This is a wild brawl from the start, with a chair and the ring bell getting involved early. They fight in the aisle amongst some bricks and wooden pallets used for the set, and when Jack suplexes HHH on a pallet, a piece of wood pierces the Champion’s calf and causes it to bleed. That’s not the only place where Jack draws blood, as the barbed wire baseball bat is more than enough to bust open the Champion’s head. HHH continues to fight though, and he produces handcuffs. Jack takes a beating and goes down the aisle, allowing The Rock to come out and blast HHH in the face with a chair! A police officer comes out and takes the cuffs off, giving Jack a second wind. Back in the ring Jack produces a bag of thumb tacks, but he’s the one that suffers when HHH delivers a back-body drop. HHH hits a Pedigree but it only gets two! One more Pedigree into a pile of tacks is enough to get the pin. This is my favorite match of all-time. The storyline was compelling and flawlessly executed, and the match was exactly what that storyline called for. Both men took and dished out a great deal of punishment, and they built to everything perfectly. Even The Rock interfering here didn’t feel out of place. Just awesome.
Rating: *****

Officially the intervals are 90 seconds this year, but we all know how closely they stick to that. Brown and Sexay are the first two, followed by Mosh. Taka Michinoku and Funaki of Kaientai come out right after Mosh, and even though they’re not really in the match they get thrown over the top rope quickly. The next notable entrant is Rikishi, and he clears the ring except for Sexay, who wants to dance. Scotty is the next man to the ring, so of course they all dance together. Great spot. Rikishi then eliminates both members of Too Cool all by himself. He continues his domination, tossing Blackman and Viscera out in succession. Boss Man is next out and he stalls all the way until the next entrant, which is his rival Test! They all get in the ring to fight it out, and Bulldog is the next entrant, followed by Gangrel. Kaientai run out again and quickly get thrown over the top rope. That’s a great bit, but unfortunately for Taka he landed hard on his face and his night is over. Edge joins the fray next, followed by former two-time WWF Champion Bob Backlund! The crowd gives Backlund a rousing ovation. Every man in the ring gets together to toss Rikishi. Intercontinental Champion Chris Jericho is next, and he quickly eliminates Backlund. Chyna comes out and gets rid of Jericho, and then Boss Man eliminates her right after. Faarooq is out next and the Mean Street Posse run out uninvited and beat Faarooq down, leaving him easy prey for Boss Man to eliminate. Road Dogg is up next, followed by Al Snow. The Dogg eliminates the Bulldog. Venis is next, and Funaki makes another run-in without Taka, who’s been taken to the hospital. Albert is next, and Edge gets eliminated by Venis and Snow. Hardcore Holly is next. Finally, The Rock makes his way into the Rumble and gets rid of Boss Man. Mr. Ass comes out next. Rock gets rid of Crash, whom he named as one of the biggest threats in his pre-match promo. Big Show is next, making his Royal Rumble debut. He eliminates Test and Gangrel straight away. Bradshaw makes his way down and the Mean Street Posse are back! The New Age Outlaws take that opportunity to dump Bradshaw out. Kane is next, and he dumps Venis to the floor. Godfather comes out with a Ho Train as Kane eliminates Albert. Funaki runs out again and this time Snow throws him out. Lawler has been calling Kaientai “Chinese” all night in a powerfully unfunny running gag. The final entrant in the match is X-Pac, as he joins the field with Rock, Show, Holly, Gunn, Kane, Snow, and Godfather.

Snow eliminates Holly. Show dumps Godfather, and Rock eliminates Snow. Gunn eliminates his tag team partner Road Dogg, and then Kane eliminates Gunn. The Outlaws pull Kane out under the bottom rope, and Rock tosses X-Pac. The referees didn’t see X-Pac get eliminated thanks to the Outlaws brawling with Kane, so he’s allowed back in the ring. That makes the final four Rock, Show, Kane, and X-Pac. Kane bodyslams Show, and then gets eliminated by an X-Pac spin kick. Show then press slams X-Pac to the floor. And we’re down to two. Rock hits the People’s Elbow and tries to throw Show out, but Show stops him and hits a Chokeslam. Show puts Rock on his shoulder and goes to slam him out, but Rock hangs on and Show tumbles to the floor! The Rock wins! He tries to cut a victory promo, but Show comes out and ruins that, throwing Rock over the top rope to the floor. This is a fun Rumble, with a couple of great added bits (Kaientai, Mean Street Posse) to make it stand out. The roster of guys is almost a Who’s Who of Attitude Era names, and since I was in high school watching every pay-per-view with my friends at this point, the nostalgia factor is strong here.
Rating: ****

A2Z Analysiz
A memorable Rumble and my favorite match of all-time makes this an easy show to recommend going back to. Tazz’s debut and the tables match are also enjoyable in different ways. Sure, the Tag Title match and the Miss Rumble bikini contest are throwaway segments, but overall this is one of the stronger overall Rumble cards in history.