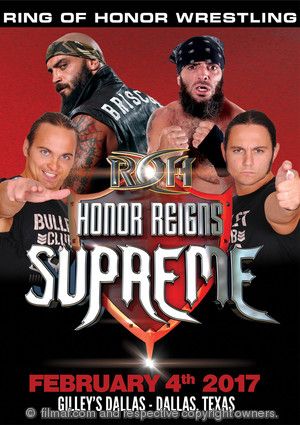 Ian Riccaboni and Silas Young are on commentary.

~MATCH #1~
Dalton Castle defeats Donovan Dijak. They stall quite a bit to start, and Castle plays some mind games with his larger, stronger opponent. Dijak counters Castle’s unorthodox approach with his unique blend of size and agility. The crowd ends up chanting “this is wrestling,” which overstates the value of this match by a ridiculous amount. In the end, Castle hits Bang-A-Rang to get the pin. Solid opener here, with a fun mix of Castle’s antics and solid wrestling. Though is it just me or did Donovan Dijak job like, all the time?
Rating: **¾

~MATCH #2~
War Machine (Hanson & Ray Rowe) defeat Rhett Titus & Andy Dalton. Titus says he is here on official Rebellion business, and since none of his partners are here tonight, he will give an opportunity to “Dirty” Andy Dalton. Titus is dismayed to learn that Dalton got them a match with War Machine! Rowe and Hanson dominate their opponents, beating them up both inside and outside the ring. Titus makes a game effort, and Dalton shows tremendous heart. Dalton can’t get up after getting squashed with the Fallout, and War Machine gets the win. Fine little match here, as there’s nothing wrong with War Machine getting a dominant win.
Rating: **

~MATCH #3~
BULLET CLUB (Adam Cole & Cody) defeat The Addiction (Christopher Daniels & Frankie Kazarian). Cole is the current ROH World Champion, and he has a scheduled title defense against Daniels coming up, so that’s the story here. The BULLET CLUB duo stalls a lot to start. Once the action commences, the Addiction control the early going. Cody and Cole use some underhanded tactics to take the advantage. Kazarian gets isolated for a while, then Daniels gets the hot tag, then the referee loses control for a while. Cole and Cody try to introduce some chairs into the fray, but that backfires on them. In the end, Cole catches Daniels with a superkick to get the pin. I like that finish, as it casts doubt on Daniels’ ability to take the ROH World Title from Cole. This was a solid match, with the stalling going a bit too long in the beginning, but they did a good job from there. Cole and Cody make a good team.
Rating: ***

~MATCH #4~
Hangman Page defeats Jay Lethal. The young Page attacks the veteran Lethal before the bell, as I recall that these two fought another lifetime ago at Caged Hostility in 2012. Lethal fights back and hits six suicide dives just because he can. Page sticks with it and comes back to start wearing Lethal down. Every time Lethal tries to make a comeback, Page cuts him off and keeps him grounded. Cody comes out to distract Lethal near the end, and that allows Page to hit the Rite of Passage to get the win. Good but not great match here, and I think they were going for more than that that for Page’s big victory.
Rating: ***¼

Cody and Adam Cole help Page beat Lethal down, and The Addiction come to the rescue. Daniels cuts a promo sticking up for Lethal and putting him over. He then promises to win the ROH World Title at the 15th Anniversary Show, as long as Cole can get by Bobby Fish first.

~MATCH #5~
Will Ferrara defeats Jax Dane, Jonathan Gresham, and Sho in a Four Corner Survival Match. The action is fast and furious here, and everyone tries to gang up on monstrous Dane in the early going. No one takes any sustained advantage or stands out beyond Dane being big and strong. In the end, Ferrara hits Sho with the Face Wrecker to get the pin. Nothing at all to this one, just a time-filler.
Rating: **

~MATCH #6~
Bobby Fish defeats Lio Rush. Fish is scheduled to face Adam Cole for the ROH World Title in a few weeks, so this is a big opportunity for Rush to show what he can do. This is an interesting clash of styles, and Fish takes the first sustained advantage with his measured attack. Fish focuses on Rush’s knee which is always smart against a high-flyer. After a lengthy beat-down, Rush makes a comeback and connects with The Final Hour, but Fish kicks out at the very last second. Fish hits a Falcon Arrow, and rolls it into a knee bar, but Rush gets the ropes. Rush goes up top and Fish brings him down with a Super Falcon Arrow to get the pin. Very good match between two guys II wasn’t sure would mesh but they did. Rush did some mat wrestling to keep up with Fish, but the veteran with the title shot upcoming was just too much for the youngster.
Rating: ***½

~MATCH #7~
Search & Destroy (Chris Sabin, Alex Shelley & Jay White) defeat ROH World Six-Man Tag Team Champions The Kingdom (Matt Taven, Vinny Marseglia & TK O’Ryan) by disqualification. Kingdom have been the Champions since 12.2.06, and this is their second defense. The action is fast and furious from the start here, with no shortage of bodies to throw around the ring and ringside area. First control is taken by the Champions, and they focus on Sabin. And on his birthday, no less (the crowd sang Happy Birthday to him, is why I know that). Eventually a hot tag is made, and White is fired up. The referee loses control of the match and tags become a thing of the past. Things get too out of control, and Taven hits Shelley with his walking stick to draw the disqualification. Fun match with a lot of action, but the finish was just blah.
Rating: ***¼

~MATCH #8~
ROH World Tag Team Champions The Young Bucks (Matt Jackson & Nick Jackson) defeat The Briscoes (Jay Briscoe & Mark Briscoe) in a Best 2/3 Falls Match at 23:44 to retain the titles. The Bucks have been the Champions since 9.30.16, and this is their sixth defense. Cody came out to do a hilariously elongated intro for the Bucks, but Jay Lethal came out to run him off. First fall is normal rules, the second fall is under Lucha Rules, and the third fall will be a No Disqualification Match. These teams have wrestled each other many, many times so there’s no feeling out process here, just action. The Briscoes go for a Doomsday Device, which Matt tries to counter into a victory roll, but Jay reverses that to get the pin and the Briscoes take the first fall. Jay gets on the mic to talk trash about Lucha, and Mark hits the Bucks with a steel chair to end the second fall in a disqualification. That was stupid. And we’re tied up now getting into the No-DQ portion of the match. Jay and Mark control the third fall as the commentators debate whether or not giving up the second fall by DQ was smart strategy. The fight goes on for a while and would you be shocked if I told you that the Bucks hit a bunch of Superkicks? Referee Todd Sinclair gets bumped, and Hangman Page comes out to help the Bucks with a bunch of steel chairs. Referee Paul Turner tries to help out, but he gets bumped too. In the end, the Bucks hit Jay with the Meltzer Driver and finally get the pin. This was the usual Bucks v Briscoes match, but then it just got silly with interference and ref bumps and nonsense. Disappointing outing here.
Rating: **½

JZ Says
The main event is a bit of a letdown, but for the most part this is a pretty consistent show, with everything hovering around three stars and nothing being outright horrible. Honor Reigns Supreme 2017 is easy enough to sit through, but I wouldn’t go out of your way to.