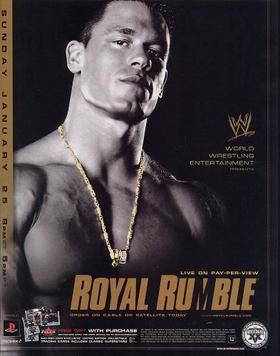 Jim Ross, Jonathan Coachman, and Jerry Lawler are on commentary for RAW, and Michael Cole and Tazz are calling the action for SmackDown.

~MATCH #1~
World Tag Team Champions Ric Flair & Batista defeat The Dudley Boyz (Bubba Ray Dudley & D-Von Dudley) in a Tables Match at 5:29 to retain titles. Batista and Flair have been the Champions since 12.14.03, and this is their second defense. This fight starts in the aisle and all four men brawl around ringside. Things stay the same when they get into the ring, just meaningless brawling. Coachman leaves the announce table to help the Champions out, and the distraction allows Batista to hurl D-Von through a table to get the win. Not much going on there; this seemed more suited to a TV setting.
Rating: *½

~MATCH #2~
Cruiserweight Champion Rey Mysterio defeats Jamie Noble (w/ Nidia) to retain the title at 3:06. Mysterio has been the Champion since 1.1.04, and this is his first defense. This one is constant action right from the bell, with Mysterio flying all over the place and Noble trying to keep him grounded. Some miscommunication from Nidia leads to Mysterio hitting the 619 and a Drop the Dime to get the pin. For three minutes I think that’s the best we could’ve hoped for.
Rating; **

~MATCH #3~
Eddie Guerrero defeats Chavo Guerrero (w/ Chavo Classic) at 8:02. Chavo was resenting all the attention Eddie got while they were a tag team, and Eddie needed something to do before Brock Lesnar, so we have this match. Chavo is aggressive in the early going but Eddie is hesitant to unleash on his nephew. He’ll take an advantage and cheat a little bit, but he won’t let his fists fly. When the fight spills to the floor Chavo Classic has no problem interfering. Back in the ring Eddie once again resists throwing punches. Chavo has no such qualms. Eddie brushes off Chavo’s attacks and hits the Three Amigos. He follows that up with the Frog Splash for the win. Classic tries to attack him but takes a punch to the face. Eddie almost leaves but goes back and kicks Classic in the nuts and finally unloads with punches on Chavo. He ties Classic’s tie to the bottom rope and kicks away at him. He goes back and continues to bloody Chavo’s face, and he rips at his eyes. These two never had good chemistry as opponents. I think it might be because Chavo is inferior to Eddie in every way and was never seen as on his level, so how could people get invested in a match between the two?
Rating: **

~MATCH #4~
WWE Heavyweight Champion Brock Lesnar defeats Hardcore Holly at 6:22 to retain the title. Lesnar has been the Champion since 9.18.03, and this is his fifth defense. Holly earned this title shot by getting his neck broken by Lesnar over a year prior to this, so they kind of had to do this match. Holly attacks before the bell but his control of the match is short-lived. Lesnar mostly dominates, Holly gets a few moves in, Lesnar finishes with the F-5. With Michaels v HHH and the Rumble coming up, I can see why they felt comfortable blowing off this accidental feud on this card. The match was not great, but no one really expected it to be either, so it’d be erroneous to call it a disappointment or anything.
Rating: **

~MATCH #5~
World Heavyweight Champion Triple H and Shawn Michaels wrestled to a no-contest at 23:05 in a Last Man Standing Match. HHH has been the Champion since 12.14.03, and this is his second defense. These two know each other very well, so there’s plenty of back and forth in the early going. HHH targets the back, Michaels the knees. The battle spills to the floor, and when Michaels tries a springboard cross body block, HHH avoids him and Michaels crashes through the Spanish Announce Table. That’s a curious spot for Michaels to get busted open on, but he’s bleeding a gusher here. Michaels returns the favor with a steel chair to bust HHH open. The two friends/rivals take it to each other with brutality, both just bleeding all over the place. Eventually HHH hits a Pedigree and Michaels makes it back to his feet at the count of nine. Michaels hits a desperation Sweet Chin Music, and now both men are unable to answer the 10-count and the referee declares a no-contest. These two only have great or below average matches, and it’s weird that there’s no middle ground. This one was below average, and just felt like they were hitting each other with moves and not really building up much of anything. It did help set up one of the greatest WrestleMania main events of all-time though, so I forgive them.
Rating: **½

Chris Benoit is the first man out, and he’s joined by Intercontinental Champion Randy Orton at #2. Mark Henry makes his way out at #3, and he starts throwing his weight around. Tajiri is #4. Bradshaw joins the fray at #5 and clotheslines everything in sight. Benoit uses his skills to eliminate the Big Texan. Rhyno is #6 and he quickly eliminates Tajiri, and then Benoit eliminates Henry by himself. Matt Hardy is #7. Scott Steiner is #8, and I get flashbacks of his performance in last year’s Rumble. Matt Morgan is #9, and Hurricane is #10 and Morgan quickly tosses him out. Booker T is #11 and he renews his WCW rivalry with Steiner. Kane is #12, bringing the record for most eliminations in a single Rumble with him. Undertaker’s gong goes off, distracting Kane long enough for Booker to easily eliminate him. Spike Dudley is #13 and he runs right into Kane, taking a Chokeslam on the ramp for his troubles. Rikishi is #14 as Benoit eliminates Rhyno. Rene Dupree brings us to the halfway point at #15, and he eliminates Hardy with a dropkick. Rikishi catches Dupree celebrating and tosses him out.

A-Train kicks off the second half at #16. Orton eliminates Rikishi, and then tosses Booker. Shelton Benjamin is #17. Benoit eliminates A-Train, and Orton eliminates Benjamin. We’re back to where we started with Orton and Benoit. Ernest “The Cat” Miller is #18, and he has his own ring announcer. Miller and his announcer get in the ring to dance, but Benoit and Orton quickly throw them both out to the floor. Kurt Angle is #19. Rico is #20 and Orton eliminates him quickly. Test’s music hits for #21 but he doesn’t appear. Cut to the back and Test is laid out. Austin decides that the mystery man that took Test out is taking his place in the Rumble, and it’s Mick Foley! Orton looks shocked, and Foley gets to the ring and goes right after him. Foley eliminates Orton and himself with the Cactus clothesline, and the brawl continues out on the floor. Christian (with terrible music) is #22. Foley and Orton fight all over the place, and Nunzio briefly gets caught in the line of fire at #23. For some reason Nunzio doesn’t enter the ring. Big Show is #24. He dominates, and Jericho comes out at #25. Charlie Haas is #26. Jericho eliminates Christian. “The returning” Billy Gunn is #27. I’m not sure what he was returning from. John Cena is #28, and he takes exception to Nunzio still sitting at ringside, so he tosses him in the ring. Rob Van Dam is #29. We reach the end with Goldberg at #30.

Goldberg destroys everything in sight, eliminating Haas right away, and then kills Nunzio dead with a Spear. He eliminates Gunn next, and then press slams Nunzio to the floor. From out of nowhere Brock Lesnar runs out and flattens Goldberg with the F-5! As Goldberg eyes Lesnar, Angle sneaks up from behind and eliminate him. Everyone tries to gang up on Show, but it doesn’t work, and he eliminates Cena and RVD. The final four is Show, Jericho, Benoit, and Angle. Show eliminates Jericho. Angle traps Show in the Ankle Lock but Show powers up and uses momentum to send Angle to the floor. That leaves just Show and Benoit. After a brief back and forth, Show tries to pick Benoit up and dump him, but Benoit traps him in a front face lock, and by sheer force of will is able to pull Show over the top rope and to the floor! Benoit goes the distance! There are a few dead spots and some real dead weight in this one (Morgan and Miller to name two), but there’s a lot to love about this Rumble. Benoit going the distance and eliminating Show all on his own (after eliminating several big men on his own earlier in the match, cool) was just perfect storytelling for his character and the story arc they were on with him. The Foley v Orton feud was advanced very well here, so they got some things accomplished. It’s clearly a step or two below 1992, but this Rumble rests comfortably near the top of the list.
Rating: ****½

JZ Says
An undercard of underwhelming or disappointing matches is mostly negated by a terrific Rumble with a deserving winner. If they would’ve cut one of the underneath matches and given the extra time to one of the remaining matches, maybe something could’ve been salvaged. Total one match show here, but since it’s nearly half of the running time, that makes this show a thumbs up.