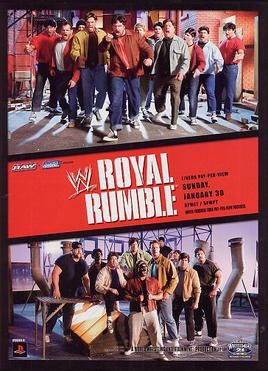 Jim Ross and Jerry Lawler are on commentary for RAW, and Michael Cole and Tazz are calling the action for SmackDown.

~MATCH #1~
Edge defeats Shawn Michaels at 18:29. Both men are pulling double duty tonight, as win lose or draw, they’ll come back for the Rumble later. These two heated rivals battle each other back and forth with aggression. Edge is still recently into his heel turn so he’s still putting all the pieces together, but he was really fun to watch on his way up the card. Late in the match Michaels tries a victory roll but Edge counters it and grabs a handful of ropes to score the pin. For a heel, I pretty much count that as a clean victory, and Edge looked great in going over here. Great choice for an opener, and with both men in the Rumble later, this gives them a chance to play off the finish.
Rating: ***½

~MATCH #2~
Undertaker defeats Heidenreich at 13:04 in a Casket Match. What did I do to deserve this? After several minutes of slow-paced brawling, RAW’s Gene Snitsky comes out to interfere. Of course, disqualifications aren’t a thing in casket matches, so this is all legal. Then the casket pops open and Kane I there to help his brother by taking Snitsky out. Heidenreich plays up being afraid of the casket but not the Undertaker, and they get some mileage out of that. After a long time, Undertaker hits a Chokeslam and the Tombstone Piledriver. That’s enough to roll Heidenreich into the casket and close the lid. Undertaker dominates a terrible big guy wrestler and wins, how thrilling.
Rating: *

~MATCH #3~
WWE Heavyweight Champion JBL defeats Big Show and Kurt Angle in a Triple Threat Match at 11:59 to retain the title. JBL has been the Champion since 6.27.04, and this is his eleventh defense. Angle stays on the outside in the early going, allowing Show to beat on the Champion for a while. Even when Angle gets involved, Show handles both men with relative ease for a while. When they take it to the floor, Angle puts Show through the announce table, which allows him to go one-on-one with The Champ back in the ring. When Show gets back in the he picks up where he left off, and it takes both Angle and JBL to thwart the giant. Back out on the floor Show spears JBL through the barricade. Back in the ring Mark Jindrak and Luther Reigns run out to help Angle, and Show goes after them. Meanwhile, Orlando Jordan puts JBL back in the ring, where he quickly clobbers Angle with a Clothesline from Hell to get the pin. Given the participants, this was really fast-paced, and action packed. Show was booked effectively to look like a monster and Bradshaw got a relatively clean win. I didn’t remember much about this one, but it was quite enjoyable.
Rating: ***½

~MATCH #4~
World Heavyweight Champion Triple H defeats Randy Orton at 21:27 to retain the title. HHH has been the Champion since 1.9.05, and this is his first defense. Orton takes the early advantage but The Game weathers that storm and quickly takes control. HHH works the leg, living out his Ric Flair/Harley Race fantasies. He also works on Orton’s head, as I think they were doing a concussion angle with Orton. Orton is surprisingly somewhat over in front of the Fresno crowd, and he’s able to get them into his comebacks. Late in the match the referee gets bumped and HHH finds his sledgehammer. HHH settles for hitting a clothesline, and then throws the sledgehammer out of the ring. HHH hits a Pedigree to get the pin. This was mostly solid but ran a little bit long for the finish they decided to go with. Plus, Orton was just dead in the water as a babyface.
Rating: **¾

Before the match can begin, Kurt Angle steals Nunzio’s number and offers to fight him for it. Nunzio declines. Eddie Guerrero is #1, and Chris Benoit is #2. Tough Enough alum Daniel Puder is #3. Puder gets on the mic and promises to win the Rumble, angering his veteran adversaries. Benoit and Guerrero stop fighting each other and team up to each the rookie a lesson. Hardcore Holly is #4, and he decides to beat Puder up as well. Holly eliminates Puder, but then gets eliminated himself by Guerrero and Benoit! Hurricane is #5, but he doesn’t last too long. Kenzo Suzuki is #6. Edge is #7, an unfortunately early draw for a guy who wrestled earlier tonight. Rey Mysterio is #8 and he eliminates Suzuki rather quickly. Intercontinental Champion Shelton Benjamin is entrant #9. Booker T is #10, and Chris Jericho is #11. The best Reigns (Luther) makes his way out at #12. With eight men in the ring, four from each brand, lines are drawn, and the crowd is surprisingly into it. Muhammad Hassan is lucky #13. All eight men that were just fighting each other decide to team up and throw Hassan out. Orlando Jordan is #14. Scotty 2 Hotty is #15, but he gets attacked from behind by Daivari and Hassan.

We kick off the second half with Charlie Haas at #16. Booker eliminates Reigns and Jordan. Scotty is heading backstage, apparently unable to compete. Booker gets cocky and executes a Spinaroonie, and Eddie makes him pay by tossing him out. Rene Dupree is #17. Jericho eliminates Benjamin, and Simon Dean is #18. Edge finally eliminates Eddie, and then mocks him to be a dick. Shawn Michaels is #19, and he goes right after Edge. He takes a quick break to hilariously eliminate Dean. Michaels eliminates Haas, and Kurt Angle comes out at #20 (taking Nunzio’s spot). Angle is a house afire, but Michaels catches him with Sweet Chin Music to score a quick elimination! Jonathan Coachman is #21, and Mark Jindrak is #22. Angle comes back out illegally and eliminates Michaels! He then bashes Michaels with the steel steps, busting him open. Viscera is #23. Next up at #24 is Paul London, sprinting his way to the ring. Dupree pauses to do the French Tickler and Jericho tosses him out. United States Champion John Cena gets a huge pop at #25. Cena singlehandedly eliminates Viscera. Next up at #26 is Snitsky. London goes after Snitsky but gets dropped on the apron. Snitsky then takes London’s head off with a clothesline to eliminate him. Kane is #26, and he and Snitsky are in the middle of a blood feud, since Snitsky caused the death of Kane’s unborn rape baby. Only in wrestling, folks. Kane dumps Jindrak out. Evolution’s Batista is #27. Batista wastes no time eliminating Snitsky, and the crowd is behind him in a major way. He hits Kane with a Batista Bomb, and then press slams Jericho to the floor. Christian is #29. Cena eliminates Kane. We reach the end with Ric Flair at #30.

Batista hits Coachman with a spinebuster and Flair tosses him to the floor. Another spinebuster leads to Christian’s elimination, and the same is true for Benoit. Flair then tries to eliminate Batista but that goes very poorly for him. Edge eliminates Flair and we’re down to the final four – Cena, Batista, Edge, and Mysterio. Great final four. Edge dumps Mysterio out, and then gets dumped by Cena and Batista. The most over guy from RAW and the most over guy on SmackDown, I love it. They trade finisher attempts, and on the Batista Bomb both men tumble to the floor at approximately the same time. It’s a 1994 repeat! Two referees declare Batista the winner, and two say Cena. Mr. McMahon comes storming out and manages to blow both quads on his way into the ring. He says the match will restart, and Batista eliminates Cena for real in about 10 seconds. This was a very fun Rumble with lots of star power, but the finish was kind of goofy and killed the momentum a little bit. Still, it was fun to see Cena and Batista going at it when the crowd was still behind them.
Rating: ***¾

JZ Says
Nothing is amazing here, but the opener, the WWE Title match, and the Rumble were all enjoyable. It was clear that Cena and Batista were the next big things and they were treated as such here. Also, Edge was very much on the rise here and he looked great in both his match with Shawn and the Rumble.