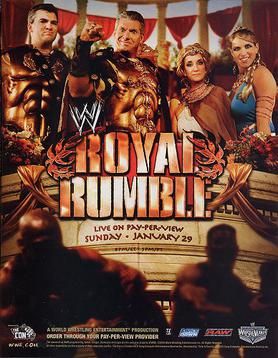 Joey Styles and Jerry Lawler are on commentary for RAW, and Michael Cole and Tazz are calling the action for SmackDown.

~MATCH #1~
Gregory Helms defats Funaki, Jamie Noble, Cruiserweight Champion Kid Kash, Nunzio, and Paul London in an Invitational Six Way Texas Tornado Match to win the title at 7:10. Kash has been the Champion since 12.18.05, and this is his second defense. Helms is coming over from RAW, due to his status as a former Cruiserweight Champion. The SmackDown guys take offense to this for some reason. This is all fast-paced offense from all six men. Amidst all the chaos, Helms drills Funaki with the Shining Wizard to score the pin and win the title, his third reign. This was a fine way to get the crowd going, but none of it was in any way memorable.
Rating: **½

~MATCH #2~
Mickie James defeats Ashley at 7:38. Trish Stratus is the Special Referee and the Women’s Champion. Ashley starts off as the aggressor, but Mickie cuts her off and slows the pace. Trish calls it down the middle, and Ashley makes the comeback. The thing about Ashley as a wrestler though, is that she’s quite bad. The fans catch on to this and start to boo the match. Ashley executes mounted punches in the corner and Mickie pulls her down in a powerbomb to get the pin. This was all kinds of sloppy and not a good showcase for Mickie, due to Ashley being so terrible.
Rating: *¼

~MATCH #3~
The Boogeyman defeats JBL (w/ Jillian) at 1:45. Jillian distracts the Boogeyman so JBL can take the first advantage. JBL goes for the Clothesline from Hell but Boogeyman ducks it and JBL hits the steel post. Boogeyman hits the Goodnight to get the pin. I have no idea what the point of putting that on PPV was, but at least they kept it short.
Rating: ¼*

The Spirit Squad start us off with a pre-match cheer. Triple H comes out at #1, and Rey Mysterio joins him at #2. Simon Dean is #3, and he rides out on a Segway. Mysterio and HHH work together to quickly eliminate the fitness guru. Psicosis is #4, and he has plenty of history with Mysterio. Even so, Mysterio eliminates Psicosis in short order. Intercontinental Champion Ric Flair is #5, and he goes right after HHH. Flair is a house afire but HHH sends him to the floor. World Tag Team Champion Big Show is #6, and we’re told he has issues with HHH but damned if I can remember what they are. Jonathan Coachman is #7, and he goes after Show for some reason and gets quickly dumped. Lashley is #8 and he goes after Show. Next up is Show’s tag team Championship partner Kane at #9. Lashley hits Kane with the Dominator, which is crazy. Sylvan is #10 and he gets eliminated by Lashley in about five seconds. Kane and Show then team up to dump Lashley out. Then the Champs battle each other up against the ropes, and HHH eliminates both at the same time! Carlito is #11 and not much happens. Chris Benoit is #12 and he goes after everyone. United States Champion Booker T is lucky #13. He has a rivalry going with Benoit so that’s who he targets. That’s a mistake, since Benoit throws him to the floor in about 10 seconds. Next up at #14 is WWE Tag Team Champion Joey Mercury. We reach the halfway point with Tatanka at #15.

The other WWE Tag Team Champion, Johnny Nitro, kicks off the second half at #16. Nitro helps his partner Mercury and vice versa. Trevor Murdoch is #17. More random brawling and Eugene makes his way out at #18. Road Warrior Animal is #19, and he comes in a house afire. Rob Van Dam is #20, returning from a knee injury. He eliminates Animal, and then #21 comes out and it’s Orlando Jordan. Chavo Guerrero is #22. The ring is getting full and could use some clearing. HHH eliminates Chavo in short order, and then Matt Hardy comes out at #23. MNM join forces to hit Tatanka with the Snapshot and then toss him out. Super Crazy is #24, and nothing happens until Shawn Michaels comes out at #25. Michaels eliminates Murdoch. Chris Masters is #26. Viscera gets the vaunted #27, and this is during his pajama wearing phase. He eliminates Matt Hardy, and then Shelton Benjamin is #28. Benoit dumps Eugene to the floor. The returning Goldust is #29. The final man is out and it’s Randy Orton.

Orton dumps Benoit right away, and then starts dishing out RKOs. Masters and Carlito eliminate Viscera, and then Carlito eliminates his partner Masters! It’s truly every man for himself. RVD eliminates Goldust, and Orton tosses Jordan. Michaels and HHH have a brief tussle before it’s broken up by MNM. The tag champs set Michaels up for the Snapshot, but he counters out of it and eliminates both Champs. Michaels eliminates Benjamin with Sweet Chin Music, and that brings out Mr. McMahon (entrance music and all). With Shawn distracted, Shane McMahon sneaks into the ring and throws Shawn out! Michaels is furious, and rightfully so. RVD eliminates Carlito and we’re down to the final four – Triple H and RVD from RAW, and Rey Mysterio and Randy Orton from SmackDown. RVD and Rey try to work together but HHH breaks that up and eliminates RVD. Finally, Mysterio eliminates HHH, and the crowd pops huge. HHH is pissed, and he pulls Mysterio under the bottom rope and throws him into the steps. Orton looks ready to pick the bones, but it’s not to be. Mysterio counters a slam into a headscissors and sends Orton to the floor, winning the Rumble from the #2 slot. This is a bit of a mixed bag as a Rumble. Rey and HHH held it together very well by being out there the whole time, but the middle had a long dead section where the ring was just filling up and not much was happening. I do think Mysterio deserved a big win, so I was happy to see him get this.
Rating: ***½

~MATCH #5~
John Cena defats WWE Heavyweight Champion Edge (w/ Lita) at 14:02 to regain the title. Edge has been the Champion since 1.8.06, and this is his second defense. Cena starts off as the aggressor, but Lita interferes to give Edge the advantage. For a really heated feud between two talented performers, this entire match is rather subdued. Lita tries to interfere again, but it backfires, and Edge knocks her off the apron. Cena hits the FU and locks on the STFU and Edge taps the title away. Cena is now a mere two-time WWE Champion. These two would go on to have some outstanding matches together, but this one just lacked any sort of spark. The work was proficient, just not engaging.
Rating: **¾

~MATCH #6~
World Heavyweight Champion Kurt Angle defeats Mark Henry (w/ Daivari) at 7:00 to retain the title. Angle has been the Champion since 1.13.06, and this is his first defense. He takes the fight to Henry, but the challenger uses his size and strength to swat Angle away and take control. Late in the match the referee gets bumped, so Angle goes for a steel chair. Daivari tries to stop him so Angle blasts him with a shot to the face. Henry takes the chair away, but he can’t block a well-placed low blow. Angle then destroys Henry with two sick chair shots. Henry kicks out of that. Angle then runs Henry’s head into an exposed steel turnbuckle and rolls him up for the pin. Totally nothing match as Henry had no chance here and nothing seemed to matter.
Rating: *½

The reason Angle v Henry had to go at last is now revealed, as Undertaker makes his return to indicate he’s coming for the World Heavyweight Title.

JZ Says
This is not a good show, as the undercard is brutal, the Rumble is right in the middle of the show, and the two title matches after the Rumble are completely underwhelming. It’s cool to see Rey Mysterio get his time to shine, and the Rumble match is worth watching (as always). But nothing else on the show needs to be seen by anyone, ever.