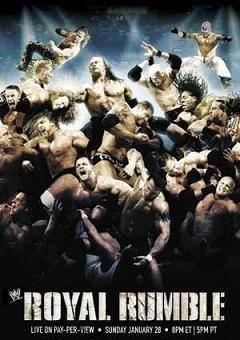 Jim Ross andJerry Lawler are on commentary for RAW, Michael Cole and JBL are calling the action for SmackDown, and Joey Styles and Tazz are here for ECW.

~MATCH #1~
The Hardys (Matt Hardy & Jeff Hardy) defeat MNM (Joey Mercury & Johnny Nitro, w/ Melina) at 15:36. Jeff is the reigning Intercontinental Champion at this point. Even so, Nitro and Mercury control the bulk of the early going, no matter which Hardy is in the ring. This goes on for much longer than I would’ve expected, with MNM cutting the ring in half and just doing their thing. Eventually the Hardys get the big hot tag and comeback, and the referee loses control. In the Matt hits Nitro with a Twist of Fate, and then drags Mercury to the floor with him. Jeff follows with a Swanton Bomb on Nitro to get the pin. Adequate tag team match here, but I expected something more entertaining and faster paced.
Rating: ***

~MATCH #2~
ECW World Heavyweight Champion Bobby Lashley defeats Test by countout at 7:29 to retain the title. Lashley has been the Champion since 12.3.06, and this is his fifth defense. Test is just riddled with bacne here. Lashley dominates the early going, but Test makes a comeback by ramming Lashley into the ring post from the apron. Test works on Lashley’s arm for a while, and when Lashley makes the big comeback, Test just decides to get himself counted out. Yeah, this was the finish that someone got paid to come up with. Dull match, horrible finish.
Rating: ½*

~MATCH #3~
World Heavyweight Champion Batista defeats Mr. Kennedy to retain the title at 10:36. Batista has been the Champion since 11.26.06, and this is his second defense. Kennedy has defeated six former World Champions in the past year, and he won a Beat the Clock sprint to earn this title shot. Batista tries to overpower Kennedy, who counters by attacking the knee. Late in the match when Batista looks ready to hit the Batista Bomb, Kennedy counters and the referee gets bumped. Kennedy gets a visual pin-fall, but Batista gets a real pin-fall after the Batista Bomb. This is not great, as Kennedy was a total lame duck challenger and his offense looked consistently awkward. But it makes complete sense why they’d run this match on a Rumble, and with Cena v Umaga to boot.
Rating: **¼

~MATCH #4~
WWE Heavyweight Champion John Cena defeats Umaga (w/ Armando Estrada) in a Last Man Standing Match to retain the title at 23:03. Cena has been the Champion since 9.17.06, and this is his fifth defense. He’s coming into this match with injured ribs. Umaga is dominant from the get-go, using his size and power to throw Cena around in and out of the ring. He brings the stairs into the ring, but Cena knocks him off the apron, and tosses the steps right into Umaga’s face! Awesome spot. Cena is too injured to follow up, and Umaga cuts him off with a vicious spinning heel kick. Umaga goes back to work and sets the steps up again in the corner. He lays Cena against the steps and goes for the running butt splash, but Cena moves! Another cool spot. The steps continue to play a vital role in the match as a weapon for both men. Cena gets busted open and he’s in bad shape here. Even so, he finds the strength to grab a television monitor and bash Umaga on the head with it. Another awesome spot occurs when Umaga sets Cena on the ECW announce table and runs across the other two tables with a splash but misses, breaking the table. Back in the ring Estrada helps Umaga undo the top rope and turnbuckle, and Umaga tries to use the steel as an assist with the Samoan Spike. Cena ducks it and hits the F-U! Cena cracks Umaga on the head with the steel, and then wraps the top rope around Umaga’s throat in the STF-U! Awesome spot, and a great visual with a bloody Cena pulling with everything he’s got. Cena chokes Umaga out, and that keeps him down for the 10-count. What a great match, Umaga’s best-ever. They told a great story of the unbeatable monster in a gimmick match that suited him, but the Champion had just enough resolve and cleverness to outlast him. They built up to big spots perfectly and devised a perfect finish. Outstanding match.
Rating: ****½

Ric Flair is #1, and Finlay is #2. This should be fun. They do battle for 90 seconds, and then Flair’s rival Kenny Dykstra is #3. Matt Hardy follows at #4, pulling double duty. The first potential winner is World Tag Team Champion Edge at #5. Edge eliminates Flair and Dykstra. Tommy Dreamer is #6. He manages to get to the ring without shedding any tears. Sabu is #7, and he immediately sets up a table on the floor. Cruiserweight Champion Gregory Helms is #8. Still just one man eliminated as Shelton Benjamin comes out at #9. Eliminations record-holder Kane is #10. He gets rid of Dreamer and Sabu. CM Punk is #11, and King Booker is #12. Booker immediately tosses Helms out. Lucky #13 is Super Crazy. Intercontinental Champion Jeff Hardy is #14, so both Hardys are in the ring together now. We reach the halfway point with The Sandman at #15.

Sandman brings his kendo stick and gets in a couple of shots, but Booker throws him out with urgency. World Tag Team Champion Randy Orton is #16. Edge and Orton work together to eliminate Crazy and both Hardys. The crowd goes wild for United States Champion Chris Benoit at #17. Big names keep coming out, as Rob Van Dam is #18. Kane eliminates Booker, who doesn’t take kindly to that. Booker gets back in and throws Kane over the top rope. They brawl on the floor to set up a feud that literally not one person cared about. LITERALLY. Viscera is #19. The ring is full, with not much happening. Johnny Nitro, another one pulling double-duty, is #20. Kevin Thorn (no Ariel is bull-crap) is #21. Rumble veteran Hardcore Holly is #22. Still nothing happens but the crowd explodes when Shawn Michaels comes out at #23. Michaels throws Finlay out, and then hits Viscera with Sweet Chin Music. Everyone bands together to dump Viscera, and Michaels tosses Benjamin. Chris Masters is #24. Benoit eliminates Nitro. Chavo Guerrero is #25. Benoit eliminates Thorn. MVP is #26. RVD dropkicks Masters to the floor. The venerable #27 is Carlito. The Great Khali saunters out at #28, and he eliminates Holly and Benoit. Rookie The Miz is #29, and he gets dumped out by Khali in nearly record time. RVD, Punk, Carlito, and Chavo all get eliminated at Khali’s hands as well. We reach the end with the Undertaker at #30. Undertaker eliminates Khali all on his own, and we’re down to the final five. Undertaker tosses MVP, leaving us with Undertaker/HBK and Orton/Edge. Michaels gets taken out with an RKO, and the Tag Champs work together on Undertaker after some initial dissension. Orton and Edge set Undertaker up for a Con-Chair-To, but Michaels sneaks back in and backdrops Orton out, and then hits Sweet Chin Music to eliminate Edge! We’re down to two, and both are down. Undertaker sits up, and Michaels kips up! Yeah, this is great. Both men take it to each other and tease multiple eliminations. Michaels tees up a Sweet Chin Music but Undertaker ducks and dumps Michaels to the floor! Undertaker becomes the first guy to win from the #30 spot. Most of this match was instantly forgettable, but the final four was easily one of the best final four and especially final two sequences in Rumble history. That gives this a pretty generous overall rating.
Rating: ***¾

JZ Says
The Rumble ends incredibly strong after not much else, and the WWE Championship Last Man Standing is outstanding stuff. The opener and World Heavyweight Title matches are decent, but TV-level stuff, while the ECW Title match is borderline insulting. Still, the last two matches make this an easy show to recommend.