The amazing thing about small kids is that they don’t live by the calendar. If you have a preschooler, they ask why they can’t knock on the neighbor’s door with their candy sack on Nov 1? They demand you turn on the slip and slide in March. And they will want to watch Christmas specials as you’re dunking Easter Eggs. So odds are they are asking you when you’re getting the home video of Dr. Seuss’ The Grinch that they saw in the theater before Christmas. The answer is two parts. First you can watch the digital version starting January 22. More importantly three different home video packages are arriving February 5. And Illumination has an extra present of a few fresh shorts and plenty of bonus features that will make the kids’ eyes open three sizes wider. Here’s the press release from Universal Pictures Home Entertainment: 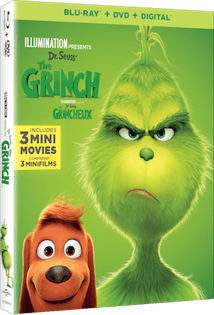 WITH THREE HILARIOUS NEW MINI-MOVIES FEATURING THE MINIONS AND MAX!

Universal City, California, January 3, 2019 – Families everywhere can ring in the New Year with Dr. Seuss’ The Grinch on Digital and via the digital movie app MOVIES ANYWHERE on January 22, 2019, and on 4K Ultra HD, 3D Blu-ray™, Blu-ray™, DVD and On Demand on February 5, 2019. From Illumination and Universal Pictures Home Entertainment, the film based on Dr. Seuss’ beloved tale about a cynical grouch who goes on a mission to steal Christmas from others only to feel his own heart grow three sizes larger through unexpected friendships is one “the whole family can watch and enjoy,” (Kidsday/Newsday).

The new home entertainment edition contains more than 60 minutes of bonus content, including three mini-movies: “Dog Days of Winter” starring the Grinch and his heroically loyal dog Max; and “Yellow is the New Black” and “Santa’s Little Helpers,” both starring the lovable Minions. It also includes stunning featurettes, a how-to-draw tutorial and much more. Narrated by Grammy Award®winner and Oscar® nominee Pharrell Williams, Dr. Seuss’ The Grinch stars Academy Award® nominee Benedict Cumberbatch (Dr. Strange, “Sherlock”) as the infamous Grinch, who lives a solitary life inside a cave on Mt. Crumpit with only his loyal dog, Max, for company. The incredible voice cast includes Rashida Jones (“Parks and Recreation,” The Muppets) as Donna Who, Kenan Thompson (“Saturday Night Live”) as Bricklebaum, Cameron Seely (The Greatest Showman) as Cindy-Lou Who, and featuring legendary actress Angela Lansbury (Anastasia, Beauty and the Beast) as the mayor of Whoville. Funny, heartwarming and visually stunning, Dr. Seuss’ The Grinch is a perfect night in for the whole family!

Who’s Who in Who-ville (interactive map) – There are so many interesting characters that call Who-ville home that it’s hard to keep track of them all. This “Who’s Who” pop-up book uses animation to create a virtual storybook that takes us from Who-ville to Mt. Crumpit.
“You’re A Mean One, Mr. Grinch” Lyric Video – Tyler, The Creator puts a modern spin on the Seussian Christmas classic.

Yellow is the New Black – Before they all make their big escape from prison in Despicable Me 3, a couple of lucky Minions get a taste of freedom as they break free with the help of one of their fellow human inmates.
Dog Days of Winter – Max braves the harsh winter weather and an uncooperative Who to bring a sick Grinch his favorite hot tea.
Santa’s Little Helpers – Fan favorites – the Minions – are back for another adventure! Having been accidently dropped off at the North Pole, our Minion pals make the most of the situation by trying to become elves.

The Making of the Mini-Movies – Mini in size but not in heart, these short films are fan favorites. From the Grinch and Max to the Minions – you’ll explore the themes of each of the mini-movies through the eyes of the filmmakers who made them.
From Green to Screen – It takes a lot to bring grumpy green to your home screen. This inside look at the making of Illumination’s Dr. Seuss’s The Grinch features interviews and behind-the-scenes moments with the cast, filmmakers and artists whose hearts have all grown three sizes bringing this classic tale to life.
Illuminating THE GRINCH – Using filmmaker and cast interviews, concept art and progression reels, we take a behind-the-scenes look at how the characters evolved from initial sketches to fully realized characters.
My Earliest GRINCH Memories – The cast and filmmakers of Dr. Seuss’s The Grinch reveal their earliest memories of the grumpy green character and the enduring appeal of this Christmas curmudgeon’s journey to redemption.
Grinchy Gadgets – From his body-size blow dryer to his moving mechanical chair, from his catapult to his dog drone-rig and more… you’ll get to explore the wondrous world of Grinch’s gadgets.
“I Am The Grinch” Lyric Video – A stylized look at Tyler, The Creator’s original song created just for the film.
Songs From His Little Heart – Take a deep dive into the toe tapping beats of Dr. Seuss’s The Grinch. From score to specialty songs, you’ll hear from the film’s A-list musicians on what it took to create the music behind the movie.
X-mas Around the World – Every culture practices Christmas in a slightly different way. We’ll highlight some of the more fun permutations of the holiday around the globe.
Cindy-Lou’s Yule Log – Nothing says the holidays quite like an animated fireplace blasting fake heat from your living room television. Just in time for winter, we’ll recreate Cindy-Lou’s living room on Christmas Eve for all to enjoy.
Production Babies – A celebration of the babies born to the filmmakers during the production of Illumination’s Dr. Seuss’s The Grinch.
Any Who Can Draw – Hosted by an Illumination artist and head of story Mark O’Hare, you’ll see step-by-step how to draw some of your favorite characters from this beloved holiday classic; Grinch, Max and Fred!

The film will be available on 4K Ultra HD in a combo pack which includes 4K Ultra HD Blu-rayTM, Blu-rayTM and Digital. The 4K Ultra HD disc will include the same bonus features as the Blu-rayTM version, all in stunning 4K resolution.

4K Ultra HD is the ultimate movie watching experience. 4K Ultra HD features the combination of 4K resolution for four times sharper picture than HD, and the color brilliance of High Dynamic Range (HDR) with immersive audio delivering a multidimensional sound experience.
Blu-rayTM unleashes the power of your HDTV and is the best way to watch movies at home, featuring 6X the picture resolution of DVD, exclusive extras and theater-quality surround sound.
Digital lets fans watch movies anywhere on their favorite devices. Users can instantly stream or download.
MOVIES ANYWHERE is the digital app that simplifies and enhances the digital movie collection and viewing experience by allowing consumers to access their favorite digital movies in one place when purchased or redeemed through participating digital retailers. Consumers can also redeem digital copy codes found in eligible Blu-rayTM and DVD disc packages from participating studios and stream or download them through Movies Anywhere. MOVIES ANYWHERE is only available in the United States. For more information, visit https://moviesanywhere.com.

Music By: Danny Elfman with songs by Tyler, The Creator

Based on the Book: “How the Grinch Stole Christmas” by Dr. Seuss

Dr. Seuss’ The Grinch 4K Ultra HD is available in Dolby Vision™. Leveraging the HDR innovation that powers Dolby’s most advanced cinemas around the world, Dolby Vision transforms the TV experience in the home by delivering greater brightness and contrast, as well as a fuller palette of rich colors.

Illumination, founded by Academy Award® nominee Chris Meledandri in 2007, is one of the entertainment industry’s leading producers of event-animated films. The company’s franchises include three of the top-eight animated films of all time, and its iconic, beloved brands—infused with memorable and distinct characters, global appeal and cultural relevance—have grossed more than $6 billion worldwide.

Illumination was recently honored by Fast Company as one of the world’s most innovative companies.

Illumination, which has an exclusive financing and distribution partnership with Universal Pictures, has garnered an extraordinary number of franchise successes for a studio just over a decade old. As the creator of the hugely successful world of Despicable Me, which was recently crowned the top-grossing box-office animated franchise globally, Illumination has evolved the Despicable Me series to include Minions, the third-highest-grossing animated film of all time and the most profitable film in Universal’s history, as well as the Academy Award®- nominated Despicable Me 2 and summer 2017’s Despicable Me 3, which made more than $1 billion at the global box office.

Illumination recently launched two original properties that captivated audiences worldwide: The Secret Life of Pets, which achieved the best opening for an original movie, animated or otherwise, in U.S. history, and the global smash, Sing. And in 2018, Illumination’s Dr. Seuss’s The Grinch had the biggest opening weekend of any Christmas-themed movie in history.

Founded 11 years ago with the mission of putting a smile on the face of every member of the audience, no matter their age, Illumination continues to imagine both original stories, as well as unexpected adaptations of beloved pre-existing works.