There’s a lot of jobs on a film set that are very important in the creation of a movie besides being a director. Rarely do these people have their moment to shine. So I’m delighted that upcoming Blu-ray for Vengeance of She features an interview with Trevor Coop who had two very important jobs on the set. He was Clapper and Loader. What does that mean? He put the film in the camera. You screw that job up, there’s no movie. He also operated the clapper which serves to sync the sound with the film and let the actors know it’s about time to start the scene. Now Coop has a chance to tell what he saw when they were making the film and he was perched next to the camera for this Hammer production. Here’s the press release from Scream Factory that includes a bunch of new bonus features including Coop’s chance to share: 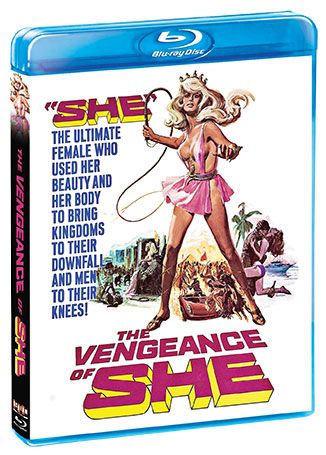 She used her beauty to bring kingdoms to their downfall and men to their knees! On February 26, 2019, SCREAM FACTORY is excited present the highly sought-after Hammer Film cult classic THE VENGEANCE OF SHE on Blu-ray. Directed by Cliff Owen and based on characters created by H. Rider Haggard, this high camp fantasy film classic stars John Richardson (Battle of the Stars, War of the Planets), Olinka Berova (Lucrezia) and Edward Judd (Island of Terror). Noel Willman (Doctor Zhivago) and Colin Blakely (Murder on the Orient Express) also co-star in the movie. A must-have for movie collectors, this definitive Blu-ray release contains special bonus content including new 2K scan of the original film elements, new interviews and much more! Pre-order is available now at ShoutFactory.com

A young beautiful woman named Carol (Olinka Berova) is plagued by hallucinatory voices calling her “Ayesha” and is drawn by a mysterious force toward the east. During her voyage, she meets Dr. Philip Smith (Edward Judd) who decides to accompany Carol to her unknown destination. Eventually the two reach the lost city of Kuma where Carol is greeted as the reincarnation of Queen Ayesha, the beloved of King Killikrates (John Richardson). Philip is imprisoned and meets Za-Tor (Noel Willman) who tells him of the high priest’s deceitful plan to obtain the secret of immortality by bringing back Ayesha to King Killikrates. Will Philip escape in time to reveal the truth and save Carol from destruction?