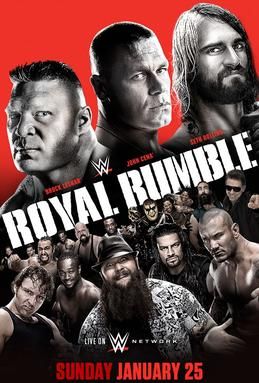 ~MATCH #1~
The Ascension (Konnor & Viktor) defeat The New Age Outlaws (Billy Gunn & Road Dogg) at 5:42. Both teams do their boring stuff, and the crowd chants “You Still Got It” at Gunn and Dogg. Whatever it is that they still got, I wouldn’t be bragging about it. Dogg is the face-in-peril here and he eventually makes the tag. Gunn comes in a house afire, but then Konnor and Viktor cut him off and hit The Fall of Man to get the win. That was a total TV match that got on a major pay-per-view for some reason. I’m not against the Ascension beating the Outlaws clean, far from it, but there was just so little reason to care about any of this.
Rating: *½

~MATCH 2~
WWE Tag Team Champions The Usos (Jey Uso & Jimmy Uso) defeat Damien Mizdow & The Miz at 9:24 to retain the titles. Jimmy and Jey have been the Champions since 12.29.14, and this is their second defense. Mizdow is massively over here. This match follows the usual tag team formula, just with the added antics of Mizdow, which certainly makes it unique. Miz refuses to tag Mizdow into the match, much to the crowd’s chagrin. The crowd wants Mizdow to win so bad, so they really get into the near-falls late in the match. In the end, the Usos put Miz away with a Sunset Bomb and a Superfly Splash to retain the titles. That was real solid stuff with the benefit of having a red-hot crowd that was really invested in one of the characters.
Rating: ***

~MATCH #3~
The Bella Twins (Brie Bella & Nikki Bella) defeat Natalya & Paige at 8:18. All four of these women are on Total Divas, so that’s why this match is happening. They follow the tag formula and Natalya plays the face-in-peril. After several minutes Natalya almost makes the hot tag, but Brie pulls Paige off the ring apron. Natalya then turns around into a forearm smash and Nikki gets the pin. That was the finish? Cole and Lawler both use the term “dominate” for the Bellas in this match, and that’s accurate. I’m not sure what that was supposed to do for Paige or Natalya.
Rating: *¾

~MATCH #4~
WWE World Heavyweight Champion Brock Lesnar (w/ Paul Heyman) defeats John Cena and Seth Rollins (w/ Jamie Noble & Joey Mercury) in a Triple Threat Match to retain the title at 22:48. Lesnar has been the Champion since 8.17.14, and this is his second defense. The crowd sings “John Cena Sucks” along to his entrance music, while Rollins and Lesnar both get monster pops. It doesn’t take long for Lesnar to start throwing out German Suplexes, and when J&J Security try to save Rollins, they get German Suplexed at the same time! This match already rules. The pace is remarkably fast, with both Cena and Rollins trying to topple the Beast of a Champion. The action is almost hard to follow, with tons of finishers and near-falls, and the crowd is right there with them the whole way. Lesnar takes three Attitude Adjustments and a Curb Stomp, but he somehow survives. Out on the floor Cena rams Lesnar through the ringside barricade and then into the steel steps. He hits Lesnar with the stairs to place him on the Spanish Announce Table. Rollins takes Cena out and then delivers a flying elbow smash through the table! With Lesnar taken out for the time being, Cena and Rollins battle each other. Noble and Mercury interfere liberally, since there are no DQ’s in a triple threat match. Lesnar appears to be out of the match as he’s being tended to by medical personnel. Meanwhile Rollins and Cena have a barnburner of a match, trading finishers and kicking out. Amazingly, Lesnar makes his way back into the match, right after Rollins landed a Phoenix Splash. Lesnar takes Cena out with a German Suplex. Rollins hits Lesnar with his Money in the Bank briefcase twice, but when he goes for the Curb Stomp Lesnar pops up and hits an F-5 to get the pin! That was incredible, with all three men on top of their games. They threw in tons of finishers, some big high spots, used J&J Security effectively, and maintained a ridiculous pace for over 20 minutes. Everyone came out of this looking like a million bucks. The Rumble match has a tough act to follow here. This is one of the greatest triple-threat matches of all-time.
Rating: ****¾

It doesn’t take long for the first surprise of the night, as Bubba Ray Dudley is #3! He hasn’t been in a WWE ring in almost 10 years. Bubba uses Truth to hit the Wazzup and the 3D on Miz. He easily eliminates Miz, and then sends Truth out after that. Harper works with Bray Wyatt to eliminate Bubba with ease. When Curtis Axel is announced as #6, he’s attacked from behind and replaced by Erick Rowan, who lost a qualifying match and thus is not an official entrant in the match. Wyatt eliminates Harper and Rowan at the same time and waits for the next entrant. It’s another surprise as #7 is The Boogeyman! Wyatt dumps Boogeyman out, followed by Cara and Ryder. Daniel Bryan is #10 and the crowd comes alive. Bryan scores his first elimination by tossing out Kidd. United States Champion Rusev marks the halfway point at #15. Rusev quickly dumps DDP and then Fandango. Bryan faces off against Rusev and Wyatt, and he does well for himself until Wyatt knocks him off the apron like a complete jobber for the elimination that ripped the crowd’s heart out. I know I’m not the first one to say this, but to give Bryan the big return promo, build him up in the weeks leading up to the Rumble, have him come out in an awesome spot with Bray Wyatt, and then just eliminate him with the same amount of fanfare as Sin Cara or Zack Ryder. makes absolutely no sense. The crowd is pissed and chants for Daniel Bryan.

When Adam Rose comes out at #18, he has a large group of Rosebuds with him, and they’re there to catch Kingston when Rusev tries to throw him over the top rope. The Rosebuds crowd surf Kingston back into the ring, and then Rusev eliminates Rose. Rusev then knocks Kingston out as well. Roman Reigns’ entrance music is met by a chorus of boos. He quickly eliminates Goldust and then Stardust. When Mizdow is announced at #21, Miz tries to take his place but Reigns thwarts that plan and Mizdow gets in the match to a huge pop. So of course, he’s dumped out by Rusev in about 20 seconds. Dean Ambrose gives the fans a reason to live again. He and Reigns eliminate Titus O’Neil in four seconds. Not much happens for a while and then Rusev eliminates Big E. Big Show and Kane team up to eliminate Ryback, and then Kane dumps Swagger. Dolph Ziggler completes the field at #30.

Ziggler dumps Barrett but turns right into a Cesaro Swing! They take their battle to the apron and Ziggler eliminates Cesaro. Show and Kane eliminate Ziggler, Wyatt, and Ambrose. The means Kane, Big Show, Rusev, and Roman Reigns are the Final Four. Show and Kane go to work on Reigns, as the crowd boos and chants “bullshit.” The crowd hates Show and Kane, but they seem to hate Reigns even more. Kane and Show implode and start fighting each other and the crowd boos. Reigns throws them both over the top rope and seems to win the match. The crowd BOOS. Kane and Show get back in the ring to put a beat down on, but THE ROCK comes out to make the save! Rusev pops out from wherever he was, but Reigns points at the sign and dumps Rusev out to officially win the Royal Rumble. The crowd is NOT pleased, and I don’t blame them. It’s not that Reigns is bad himself, but this was such a poorly booked Rumble. There were no memorable spots, the crowd hated it, and everything just fell flat. Probably the worst Rumble ever. Yes, even worse than 1999. They really shit the bed on this one.
Rating: **

A2Z Analysiz
The Triple Threat match is worth going out of your way to see, but the Rumble is a wet fart of a match with no redeeming qualities. The kickoff match and the Tag Title match are fun, but nothing to get too excited about. Total one match show here – but WHAT a match.