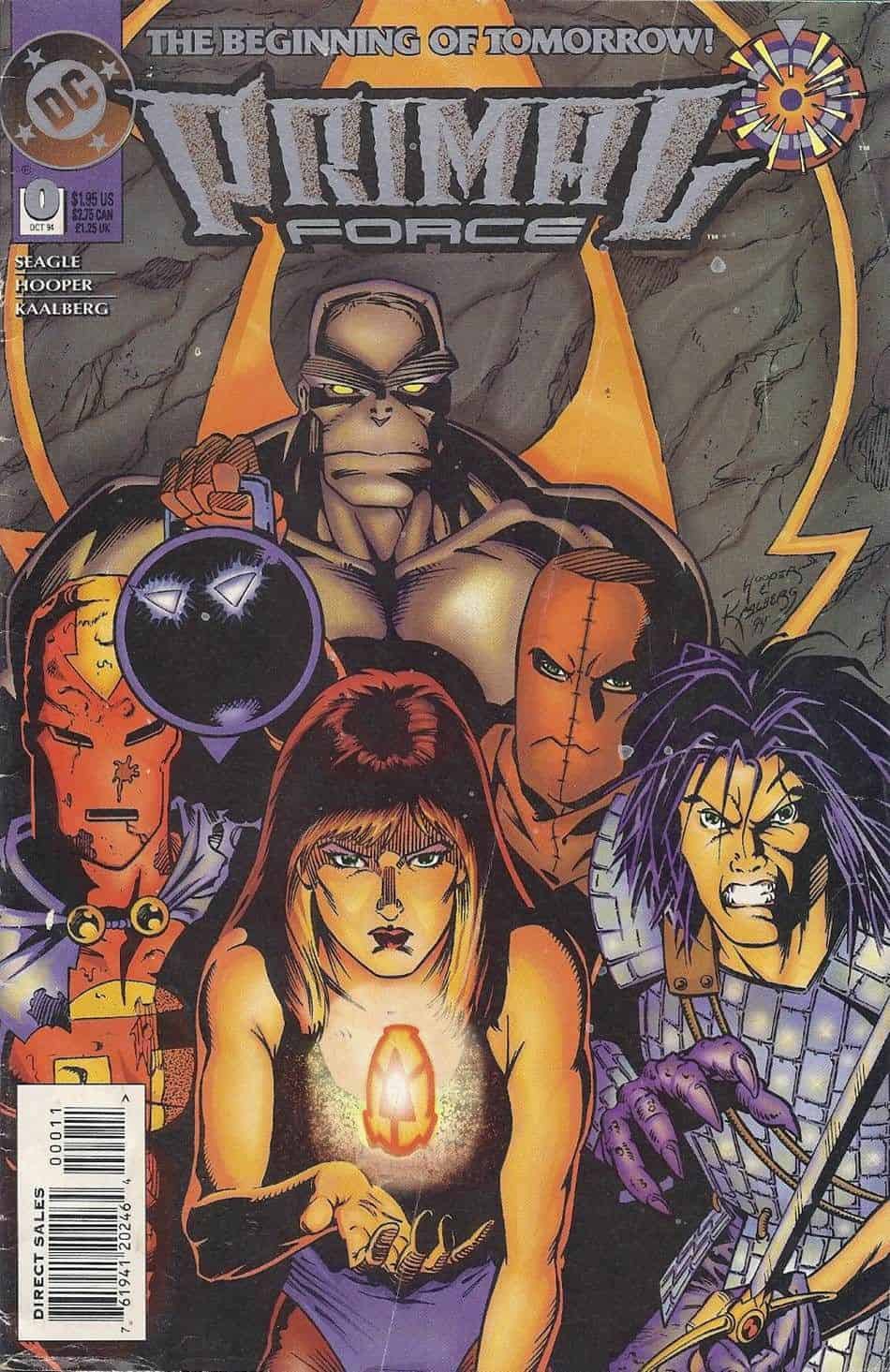 Spoilers (from twenty-four to twenty-five years ago)

DC launched four new titles after its Zero Hour event (I don’t count REBELS ’94, since it was a continuation of LEGION ‘93).  Starman was the only one that lasted and entered into comics lore. The 90s takes on Doctor Fate (in Fate) and Manhunter both looked terrible and didn’t last too long.  And then there was Primal Force, written by the great, and greatly misunderstood, Steven T. Seagle. I remember getting and liking the zero issue enough to get the first issue of the comic.  I vaguely remember being intrigued by it, but this was just when I was starting university, and was culling my comics buying down to only the most essential (i.e., Vertigo) books.

Recently, I started reading some of Seagle’s graphic novels, and it got me thinking about this comic, which I remember as having nice art and featuring Red Tornado, a character I often liked.  Looking at covers online, I realized that later issues featured Black Condor, a character I loved from his short-lived series (which I’ve already reviewed, here).  I tracked down the rest of this short run, and am going to be looking at them with new eyes here.  Let’s see if I really missed out back in the day, or if it was best that I didn’t bother. 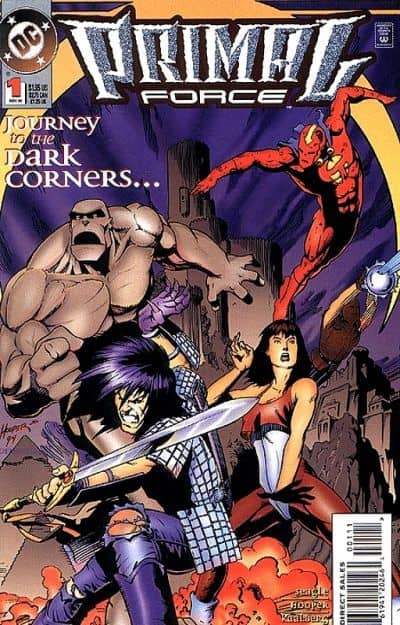 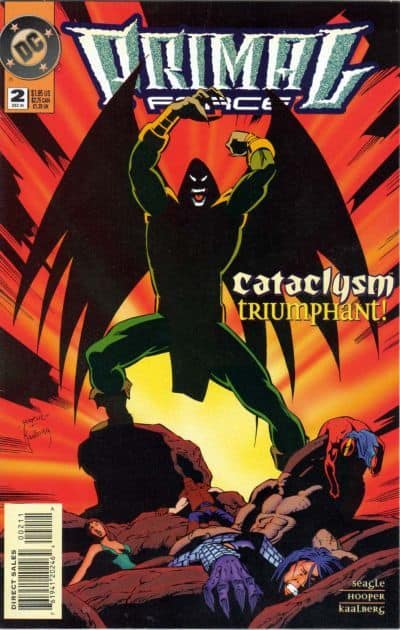 I really enjoyed this series, which is not a surprise.  Steven T. Seagle is a great comics writer, and knows how to work with obscure characters.  It is a shame that this series didn’t last longer than it did, because it feels like Seagle had an arc planned for each character, and none of them, aside from Liam’s issues with his confidence, reached any real resolution.

The mystery around the Red Tornado is the one that I most want to understand, especially the references to him having a new body.  I’m not even clear if it was him using Maltis’s body or if Maltis wore him like a suit. It’s not insignificant that Tornado didn’t talk until Maltis was inside him.  (I also want to know if it was intentional that I got a “Jim Rhodes in the Iron Man suit” vibe off the pictures that showed his eyes). I don’t think we saw the Tornado again until he was in Young Justice, which I never read, and therefore I don’t know if any of this stuff got picked up on there.  Is the Tornado still in existence in the Rebirth universe? I’d like to see him again.

Meridian was the most interesting character for a stretch of this series, but she kind of fell by the wayside.  She never gained any real mastery of her teleportation powers, always ending up somewhere other than where she intended, and come to mention it, the leylines that direct her abilities, and give the Leymen their names, never got mentioned much after the first arc.  Likewise, the misogyny that Maltis exhibited towards Meridian was never addressed – after Liam jumped forward in time, she was just on the team and it was all good.

Similarly, Black Condor just showed up on the team, and was never really developed.  He was Maltis’s right hand or enforcer at first, but then he was just kind of one of the guys.  I wanted to see more of him, as I loved his appearances in his own series, which also didn’t last all that long. 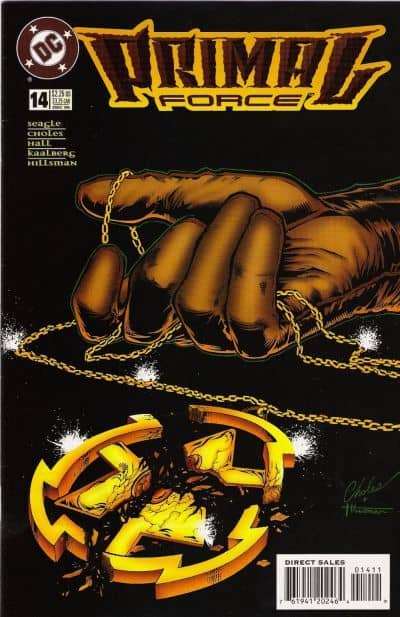 Claw and Golem were not all that interesting to me, but they did a good job of rounding out the cast.  I’d also like to have known more about Maltis and the history of the Leymen. I’d especially like to know more about the Woman in the Water, and how she fit into things.

Seagle really did lay the groundwork for a series that could have run for years, and I’m not entirely sure why this book didn’t catch on much the way that James Robinson’s Starman did.  Part of the problem might be the confusing approach Seagle took to the first couple of issues, with the reader being left to figure out who these characters are and how they were coming together.  Had the book lived, I could see Seagle adopting something like Robinson’s Times Past issues to show older stories featuring earlier Leymen.

Ken Hopper and Nick Choles weren’t the most exciting of artists for the era, but they were very capable, and the look of the book improved with time.  The guest artists were pretty random (Paul Guinan’s pages were a welcome treat, the Rob Liefeld knockoff’s, not so much), but overall the book kept a consistent look for the most part.

I wish there was a place in the market today for another oddball book like this, gathering some pretty forgotten and overlooked characters to make a solid team.  It’s a formula that should work, but would probably need Batman in the Maltis role, and it still would only last about as long as this title did. I’d also like to see Seagle dip his toe into a shared universe again – his X-Men was excellent – although I’m happy to be checking out his graphic novels, like his recent one on social nudity.

Usually in this column, I like to look at entire runs of series, but for my next column, I want to look at a book that took a radically different direction for a while, and was easily one of the most oddball of oddball books for six months.

Believe it or not, this book was never collected into a trade, so you’re going to have to do some longbox digging if you want to read it yourself on paper.  Digitally, check here: Primal Force (1994-1995).