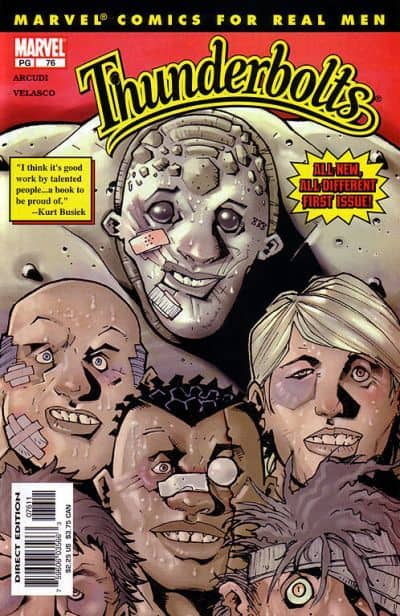 Spoilers (from sixteen years ago)

Marvel was in a strange place in 2003, where they were reevaluating what many of their characters meant in the post-9/11, post-bankruptcy world.  They were, for the first time in a decade or more, truly innovative, and seemed unafraid of shaking up fans’ expectations. In April of 2003, Kasper Cole had taken up the habit of the Black Panther, Geoff Johns was writing the Avengers, John Cassaday was drawing Captain America, Quentin Quire was leading a riot at the Xavier School, the story of the first, black, Captain America was being told in Truth, and the title Thunderbolts underwent a complete sea change.

I’d like Thunderbolts in its early days, when Kurt Busiek surprised everyone with the revelation of who the new super team really was.  I stuck with it, as Hawkeye tried to rehabilitate the characters, despite the truly terrible Mark Bagley character designs and facial expressions.  At some point, though, I gave up on the book and had dropped it.

I remember seeing issue seventy-six on the stands, with a cartoony image, a new trade dress, and a promise of being “all-new and all-different.”  Comics readers know not to expect much change when they see that phrase now, but flipping through the book, I was deeply confused as to what it was, and decided to bring it home.

John Arcudi (an unsung great) and Francisco Ruiz Velasco took the book back to its earliest concept, that of a villain’s redemption, and mixed in some underground boxing, to give us the most unexpected and off-the-beaten path title Marvel was putting out at the time (and Marville was still a thing then).

I remember having fond feelings about this book, but can’t actually remember much of the substance of it.  It’s time to revisit it, and see how it stands up. 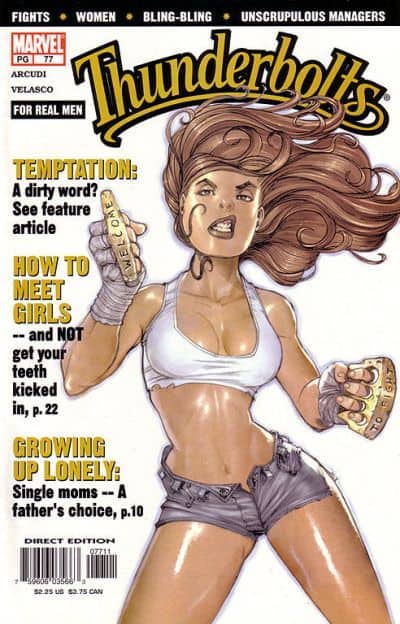 This was a terrific, if too short, run.  John Arcudi took this book to very new places, showing us the life of a D-list supervillain trying to get on with his life.  It fits with the usual theme of the Thunderbolts title, the quest for redemption, but takes it to a much more street level view, and does it without any connection to the previous seventy-five issues of the title.

Arcudi is just so good at developing these characters.  He really makes Daniel’s plight clear, and makes everything here believable.  The inclusion of some Marvel characters helps contextualize the comic, but Daniel could be any ex-con looking to turn himself around without any real help or prospects.  That he’s huge and strong isn’t the point.

I’m not sure if this was always just going to be a six-issue run, because there was a lot of room for further exploration.  I’d like to know more about Coach Cady, who is himself super strong, but a complete mystery. I’d also like to have seen more of Man-Killer, who was a pretty interesting character the way she was written here (and probably nowhere else in her previous and later appearances). 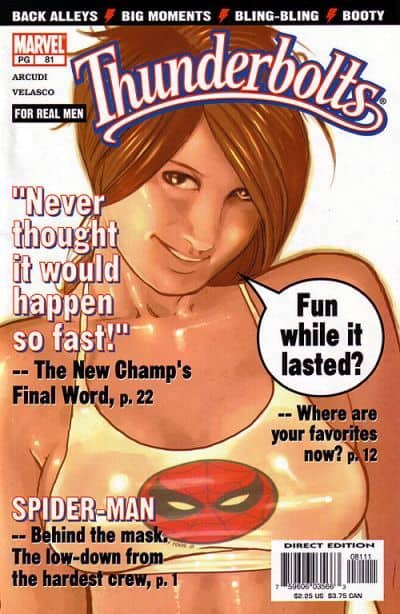 I love the art by Francisco Ruiz Velasco, which is cartoony but also very evocative.  His oversized powered people still manage to look normal, with a few exceptions.  I don’t like his redesign of the Armadillo – actually, that’s not entirely true. I found the character visually very interesting, I just don’t like that he’s the classic Captain America character whose goofy appearance has always been very endearing to me (I have a huge soft spot for the Mark Gruenwald/Paul Neary Captain America run where he debuted).

One thing I really love about this comic are Velasco’s covers, which play on the look of magazines like Maxim from that time.  I’m sure they caught a few eyes in the comics shops, but I don’t know if they helped or hurt sales ultimately, as they didn’t do the best job of advertising the actual content of the comics.  Of course, the fact that covers advertise things like “bling-bling” and “booty” is pretty cringey, by today’s standards.

It was fun revisiting this run.  There needs to be more “slice of life” comics, like Gotham Central, that shows how people who are adjacent to mutants, heroes, and villains, just get on with their life.

Next time around, I’m going to be checking out a Milestone title that I was not aware of when it first came out, but got interested in years later.

If you’d like to read this story, there was a trade published:
Thunderbolts: How to Lose