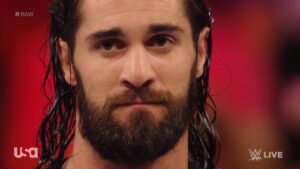 Seth comes down and says that all he ever wanted to do was point at the sign and main event WrestleMania. Of course he did. He says the choice of which champion to face will take some time before HHH comes down and hugs kids in the crowd. HHH gives him until the end of the night to make his choice and says that both Brock and Bryan are here. Ambrose says that he’s the one guy that Seth can’t beat fairly and he wants a match tonight. HHH makes the match and we get a brawl. Seth goes for the dive, but Dean slugs him. Hook and ladder gets 2 for Dean. More floor brawling leads to a high fly flow attempt, but it misses. Dean gets a la majistral for 2. Seth stomps on the mat forever and Dean takes a wacky giant leaping back bump off the curb stomp to end it.

Dean sits in a chair and wants to bare his soul until Nia Jax comes down with Tamina to qualify for the tag title match. Cole says Nia made history as the first person in both the womens and mens Royal Rumble. Dean squares off with her and when Tamina distracts him, she cheapshots him to the floor. Well this will sure do wonders for Dean as a main event-level guy. Alexa and Mickie face off with them for the qualifier, with Alexa being a face in peril against Tamina. Cole takes a break from the match to talk about all the history Nia made while Corey organically calls it historic to take people out in both Rumbles while Renee talks about how inspirational it was. Nia wears Alexa down with a long full nelson. Nia takes out both of them with a double Samoan drop to win. So Nia’s megapush will not be curtailed anytime soon.

Drew’s destruction of Kurt from November is shown before Baron Corbin comes down to insult him. This leads to Corbin vs. Kurt and Kurt starts off with some punches, but eats a lariat. Kurt gets an ankle lock, but falls to the Deep Six. Finn Balor comes down and talks about the Rumble title match before Lashley comes down – so this clearly dials the IC Title down as being secondary instead of being an important title. Lashley destroys him with a chokeslam. Between this and the post-match beating, they’re really doing a great job of getting Balor under.

Hawkins and Ryder, whose first name is messed up on the graphic, come down to face The Revival. Ryder runs wild for a bit until tagging in Hawkins, who hits a series of dropkicks and an enzuiguiri to Dawson. Shatter Machine hits and Hawkins loses – so at least The Revival is above Hawkins. Bryan and Rowan walk backstage with Bryan being upset about Burn it Down being a celebration of wanton destruction and environmental damage. Bayley and Jose do some work with kids.

Elias comes out to sing before Jeff Jarrett comes down and calls him slapnuts. Elias is back to being a heel for God knows what reason. Double J as a stooge is great and then Road Dogg returns in a The Man shirt. So I certainly didn’t think we’d be getting a Double J/Roadie reunion and Road Dogg tells Elias that if he wants to play solo, he should play with himself on his own time. That’s a great thing for the post-kids celebration segment and then they sing “With My Baby Tonight”. Road Dogg forgets the lyrics and then Renee sings a bit. Elias bonks Road Dogg with the guitar. Elias beats up Jeff, who is thankfully in all-black before fighting back with the best looking punches on TV in 2019. Elias hits him a guitar after a gut shot and this was so far the best thing on the show and the worst in one go.

Dana and Nattie face Liv and Logan next. Nattie jogs in place backstage before Dana comes up and says that she knows Nattie wanted Ember to be her partner and we get some dreadful acting. Mojo cuts an intense promo blaming someone off-screen for his lack of success. We get a camera pan over to a mirror facing himself. He says that soon, everyone will see who he is. This was good stuff – hard to see much of a ceiling with it, but serious Mojo works for great promos. Liv and Logan beat Dana and Nattie when Logan shoves Dana into Nattie’s sharpshooter on Liv and Liv schoolgirls her to win.

Ronda Rousey’s open challenge is up and she comes out to boos. Ronda’s AEW-colored gear is fantastic. She gets drowned out by Becky chants, so she talks about dreaming big and points to the sign. Bayley says she’s not Becky, but she’s Bayley and Ronda wants a fight. Ronda gets the draping armbar. Bayley counters a kick with a kneebar, but Ronda escapes. Bayley hits the Savage elbow and locks on the Bank statement crossface. Ronda escapes and Bayley goes up top, but Ronda gets the flying armbar off the top and taps her out.

Becky limps down to the ring and tells Ronda that the last time she saw her on Raw, she dropped her mid-ring and even then, Ronda never came looking for her. Now that she’s here, she’s going to make sure Ronda knows that she isn’t the baddest. Becky says she doesn’t need much time to think – she wants to face Ronda at Mania and she’ll take her title and break her mystique after she kicks her ass. A giant “kick her ass!” chant breaks out before Ronda gets a mic. She asks how her leg is and she wants her to beat the best version of her that’s out there and if she wants to, she can re-break her face and if she wanted to, she can kill her with her bare hands if she wanted to. Ronda says they’re the same age and when Becky was working her way up, Ronda was main eventing in a sport that didn’t want women. While Becky was in the pre-show at WM, she was in her first match as a star attraction and she owns the ground under her feet and she’ll own her at WrestleMania.

This was a pure money angle and they don’t need to do a single thing more to make this the main event…but there’s still three months until Mania sadly. Braun faces Drew for a bit until Corbin comes down and gets bowled over. Drew and Corbin hit a double chokeslam on the steps. Brock and Heyman come out with Heyman putting Brock over. Seth brawls with him briefly before eating an F5, then a second, third, and massive fourth one. Seth lies on the rope and asks if that’s all Brock has and hits a fifth.