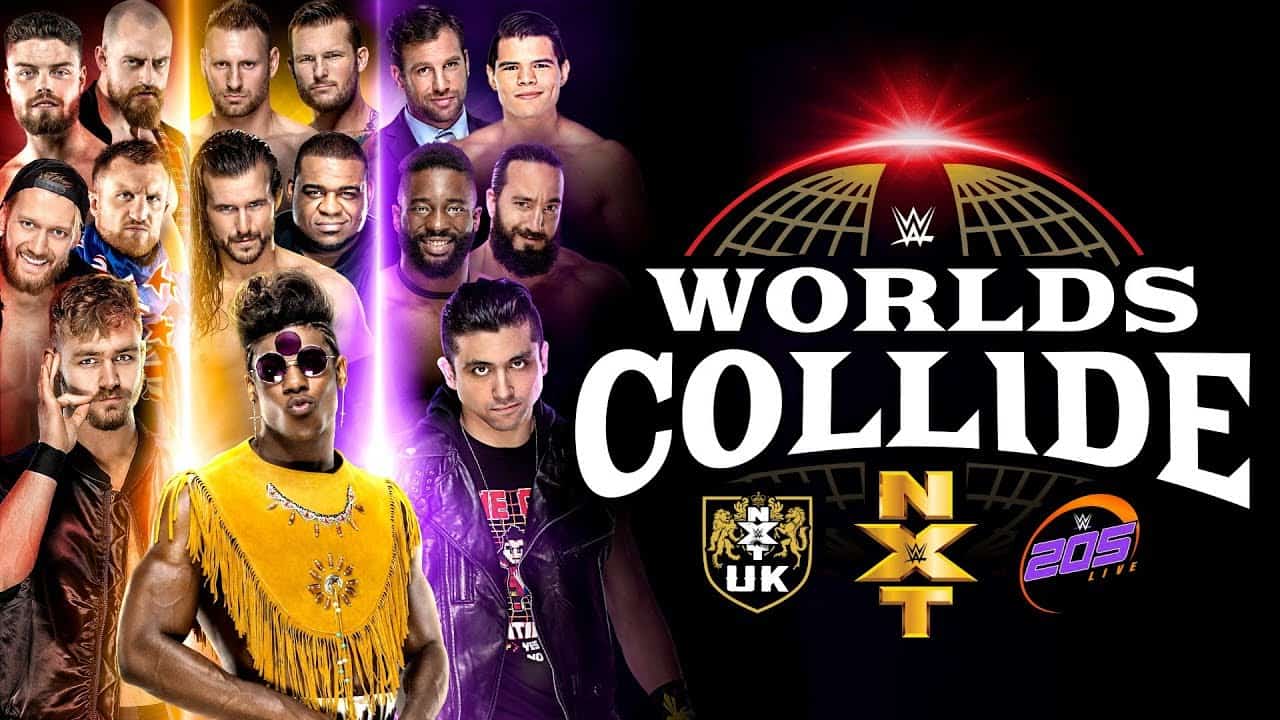 The winner of this tournament, made of NXT, NXT UK, and 205 Live wrestlers, gets a shot at any singles title he wants on any of the three brands. The opening round and quarterfinal matches aired mid-day (on the east coast. I happened to be in San Diego on vacation and watched it first thing in the morning) on WWE’s social media accounts and website. Tom Philips & Byron Saxton are on commentary, because who needs the commentators that actually work these brands anyway?

Drew Gulak def. Mark Andrews {First Round Match}
Gulak won with a surprise sunset flip in 8:29. Gulak has the distinction of being in the first match of both tournaments that have aired on WWE’s YouTube channel. I’ve never seen the matches between these two on 205 Live, but this spent most of its run-time being pretty basic (though certainly interesting) before a really wild hold-trading finish. **¾

Keith Lee def. Travis Banks {First Round Match}
Lee won in 5:06 with a Jackhammer. I appreciate that Lee got to win for a change, and that Banks’ rivalry with Jordan Devlin played into this as the leg injury he sustained in the feud held him back here. Otherwise, there wasn’t much of note here. **¼

Adam Cole def. Shane Thorne {First Round Match}
Cole won in 11:10 with the Last Shot. I know the bracket was decided by the battle royal, but having two guys from the same brand fighting in the opening round seems to defeat the purpose of this thing. Heel vs. heel is also a weird call, even if the fans love Cole. That said, maybe I don’t know anything because this was a really good performance from both guys, with Thorne working over Cole’s arm in an interesting way (which gives Cole a way out of the tournament later), and Cole found creative ways to persevere and get the win. Also he borrowed the Sick Kick from his friend Roderick Strong, which is cool because I named that move. I didn’t expect any of the first round matches to be quite this good. ***½

Dominik Dijakovic def. TJP {First Round Match}
Dijakovic won in 8:57 with Feast Your Eyes (I hate that name). This looked like it was shaping up to be structured the same as the Lee vs. Banks match, with TJP putting up a good little fight but ultimately being dominated by the bigger guy. Then they amped up the action and gave TJP the opportunity to look really savvy against Dijakovic. Ultimately, he couldn’t overcome the strength difference, but hell if he entertained me while trying. ***¼

Tyler Bate def. Cedric Alexander {First Round Match}
Bate beat Alexander with the Tyler Driver ‘97 in 10:37. I was pretty surprised this didn’t main event the opening rounds, because it was great and because it’s something of a low-key dream match. They kicked it into Takeover-level bananas action gear a few times here, and now I’m dying to see them do this thing again in front of a crowd that might react to the whole match. ***¾

Velveteen Dream def. Tony Nese {First Round Match}
Dream won in 9:05 with the Purple Rainmaker. There’s not much to say about this other than that it was kind of one-dimensional, but the action was relatively hard-hitting and consistent. Sometimes one dimension is all you need to make a point. ***

Adam Cole def. Keith Lee {Quarterfinal Match}
Cole won in 10:24 with two superkicks and the Last Shot. This was technically fine, but I didn’t really buy Lee’s selling and a lot of the match was actually pretty dull. **½

Tyler Bate def. Dominik Dijakovic {Quarterfinal Match}
Bate beat Dijakovic at 9:23 with the Tyler Driver ‘97. This was shaping up to be a (rather boring) display of Dijakovic’s diverse moveset, and then they switched it up and gave Bate a rather flukey (and unconvincing) win. I wasn’t feeling this at all, from the long chinlock early until near the finish. **¼

Velveteen Dream def. Humberto Carrillo {Quarterfinal Match}
Dream won in 11:23 with the Dream Valley Driver. This pulled the quarterfinals out of the doldrums thanks to Carrillo’s innovative offense and Dream’s charisma. They were telegraphing Dream’s trajectory in the tournament a bit hard here and in his previous match, but the dude can deliver solid outings every time so I guess it’s understandable. ***

The rest of the show aired in the evening on the Network.

Jordan Devlin def. Velveteen Dream, Tyler Bate, Adam Cole, Shane Thorne, Dominik Dijakovic, Keith Lee, Mark Andrews, Zack Gibson, Travis Banks, Cedric Alexander, Tony Nese, Humberto Carrillo, Drew Gulak & TJP {Battle Royal}
Devlin last eliminated Dream at 19:29. They talked about this match (which occurred before the opening round) on commentary during the opening round YouTube special earlier in the day, which was really annoying. Devlin earned a ticket to the quarterfinals with this win. This was crazy boring. The only interesting parts were Devlin attacking Banks after his elimination (extending their feud) and some of the action when it came down to the final four. Why was it so long?! **½

Humberto Carrillo def. Zack Gibson {First Round Match}
Carrillo won at 6:18 after hitting the Arabian Press. There doesn’t seem to be any rhyme or reason as to why this match was shown on the Network special and not on YouTube. Maybe because it was short. Gibson had attacked before the bell, angry about a skirmish between the two of them during the battle royal. From there this was basic and fine and nothing I’ll remember (except Philips calling him Alberto Carrillo) in five minutes. **½

Jordan Devlin def. Drew Gulak {Quarterfinal Match}
Devlin beat Gulak in 11:43 with Ireland’s Call. This one took a hell of a long time to get going, but once it did it fired on all cylinders. I love little things like Devlin punching Gulak in the face to get out of a submission hold. I like when these guys punch each other in the face no matter what, really. ***

Vic Joseph & Nigel McGuinness take over on commentary here, making me wonder why we had to endure Saxton & Phillips’ garbage at all.

Tyler Bate def. Adam Cole {Semifinal Match}
Bate beat Cole in 10:30 with the Tyler Driver ‘97. This finally woke the crowd up. The ladies love Bate. These two have some nice chemistry, as everything looked crisp and flowed well. Cole doesn’t blow my mind often, but he did a lot of cool stuff here, like elbowing Bate in the middle of getting hit with a German suplex. Fun stuff all around. ***¼

Velveteen Dream def. Jordan Devlin {Semifinal Match}
Dream won this sucker in 12:23 with the Purple Rainmaker. Between this match and Dream’s match against Bobby Fish, I’m going to go ahead and say that Dream sells better than pretty much anyone on the roster. This was a banger, in a three-way with Devlin’s matches against Finn Balor and Pete Dunne as my favorite matches featuring the Irish Ace. I could watch Devlin trying to take apart Dream’s ribs only to get too cocky and lose to the cockiest man alive all day. ****

Velveteen Dream def. Tyler Bate {Number One Contender Match}
Dream pinned Bate in 16:09 with the Purple Rainmaker. I was kind of surprised there wasn’t a buffer between the last match and this one. One of the things that makes this particular main event so great is that the combined age of these two is less than the age of Triple H alone (I’m pretty sure I pointed that out when they wrestled on NXT TV a year ago, but it still blows my mind). Okay so the match; it works fantastically on its own, but in the context of the tournament it’s really beautifully constructed. You had Bate learning dirty tricks from Cole that he used here. You had Dream fighting against massive odds, both because of his injury and because he had more ring-time than anyone else in the tournament (including Bate thanks to lasting much longer in the battle royal). There was also the way the crowd played into the match, fully expecting Bate to win with the Tyler Driver because he’d gotten through each previous match with it, and then buying deeply into every near-fall after that. It was also dope that when Dream tried to get fancy and steal the Tyler Driver, Bate had an answer for that. The future is safe with these two. I’d have gone even higher but the finish felt a little funky with Bate, on camera, getting into position for the Rainmaker. ****¼

The two sections of the show combined last almost four hours, which is entirely too long. That said there are three incredible matches and nothing outright bad, so if you’ve got the time to kill I say go for it. If not, just watch all of Cole, Bate, Devlin, and Dream’s matches.