Legally Blonde changed the world as girls with fuzzy pink pencils knew they could get into Harvard Law school with just a little studying. The film made Reese Witherspoon (Hook) a superstar as Elle Woods, a woman who gets revenge on her boyfriend by proving she was as smart as him. This is a big change from the usual revenge equals setting his bed on fire. The film proved so successful that it spawned a major sequel that sent Elle to Washington D.C. Now both films are coming out on Blu-ray in Legally Blonde Collection at the end of February. Here’s the press release from Shout! Factory: 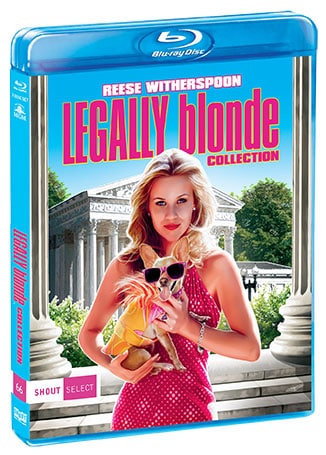 Los Angeles, CA – Elle Woods (Reese Witherspoon) takes on the world and brings it to order in The Legally Blonde Collection, coming to Blu-ray™ on February 26, 2019, from Shout! Factory’s Shout Select line, available now for pre-order from Shoutfactory.com, and Amazon.

In Legally Blonde, Elle’s boyfriend Warner Huntington III (Matthew Davis) dumps her for mean girl Vivian Kensington (Selma Blair), and Harvard Law, so she decides she should go too – what, like it’s hard? With her loyal sidekick Bruiser, the handsome Emmett (Luke Wilson), and new friend Paulette (Jennifer Coolidge) by her side, Elle hits the books and fights to be taken seriously, while she helps her friends stand up for themselves. Directed by Robert Luketic, the film cited as “impossible to dislike” by Roger Ebert also stars Victor Garber, Holland Taylor, Ali Larter, Linda Cardellini, and Raquel Welch.