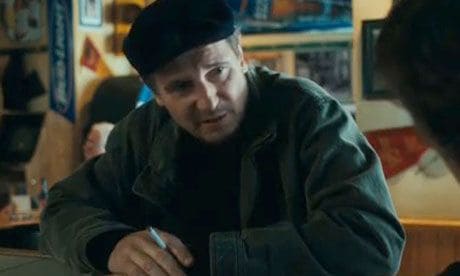 Liam Neeson has been making the press rounds for his upcoming film “Cold Pursuit” (releasing this Friday), and has gotten some negative feedback for a particular story he told publicly for the first time. BBC News Reports:

“The Hollywood star told ABC’s Robin Roberts on Tuesday that around 40 years ago, one of his close female friends – who had since died – told him she had been raped.

Neeson said it made him want to take violent action.

He said: “I had never felt this feeling before which was a primal urge to lash out, and I asked her, ‘did you know the person, was it a man?’ No. ‘Race?’ She said it was a black man.”

The actor said he “went out deliberately into black areas in the city looking to be set upon so that I could unleash physical violence”.

Neeson said of his actions: “It shocked me and it hurt me. I did seek help.”

The actor said he went to confession, and went power walking for two hours every day, to try to work through his anger.”

Since then the actor has faced backlash, and was on Good Morning America to address the controversy.

Neeson added that he wanted his original comments to start a wider conversation about racism.

Asked what he wanted people to learn from his experience, he told the host: “To talk. To open up.

“We all pretend we’re all politically correct in this country…in mine, too. You sometimes just scratch the surface and you discover this racism and bigotry and it’s there.”