There are rules for a safe and uneventful roadtrip beyond change the oil in the car and check the air pressure in the tires. Luckily Kalifornia ignores all of them to create a journey down a highway to hell with an all star cast in the seats. Brad Pitt (Fightclub), Juliette Lewis (Natural Born Killers), David Duchovny (X-Files and Californication), and Michelle Forbes (Battlestar Galatica) make it so you’ll realize why it’s best to catch a plane on your next vacation. Kalifornia now gets to join the Shout Select line with a collector’s edition to give more tales from the asphalt. Here’s the press release from Shout! Factory: 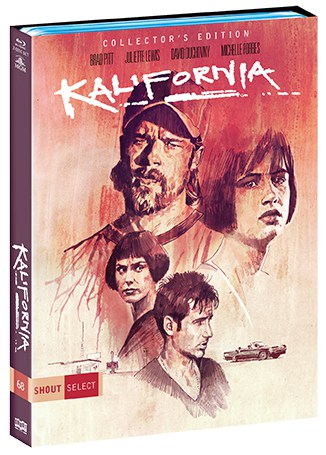 Movie synopsis
When urban intellectuals Brian (Duchovny) and Carrie (Forbes) set out on a cross-country trip to research a book about serial killers, they share the ride with a couple they barely know — Early Grayce (Pitt) and his girlfriend Adele (Lewis). Locked in a car hurtling westward, the four travelers struggle to find some common ground. But when they finally do connect, Early’s violent nature abruptly emerges and the terrified Brian and Carrie realize that they don’t need to go very far to learn about ruthless killers…because they are already face-to-face with one!