Ridley Scott had gotten a reputation as a science fiction director in the ’80s with Alien, Blade Runner and Legend when he switched things up. Someone to Watch Over Me was an Earthbound tale of a cop (Tom Berenger) having to protect a witness (Mimi Rogers) from a killer. The film showed that Scott could work in a present day New York City and with characters that weren’t about to explode from aliens in their stomachs. The movie is coming out on Blu-ray as part of Shout Select which is great since Someone to Watch Over Me usually gets skipped when talking about Ridley Scott’s career. Here’s the press release from Shout! Factory: 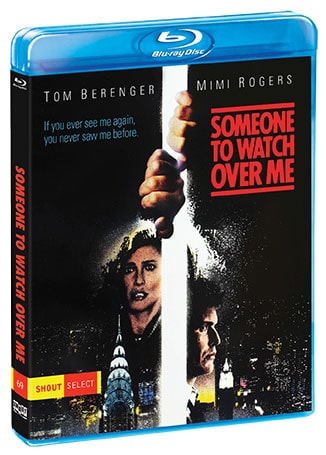 A RIDLEY SCOTT FILM
SOMEONE TO WATCH OVER ME
Starring Tom Berenger, Mimi Rogers and Lorraine Bracco
ARRIVES ON BLU-RAY™ MARCH 12, 2019
FROM SHOUT! SELECT

A stunning New York socialite and a down-to-earth city cop are caught in a deadly web of illicit passion and heart-stopping suspense in the taut, stylish thriller film classic, SOMEONE TO WATCH OVER ME. Directed by Ridley Scott (The Martian, Blade Runner), the film stars Tom Berenger (Inception, Platoon), Mimi Rogers (Bosch, Lost in Space) and Lorraine Bracco (Blue Bloods, The Sopranos). On March 12, 2019, Shout! Select will release SOMEONE TO WATCH OVER ME on Blu-ray™. Movie collectors and fans can now pre-order SOMEONE TO WATCH OVER ME Blu-ray at ShoutFactory.com.

Newly appointed detective Mike Keegan (Tom Berenger) finds his life turned upside-down when he’s assigned to protect Claire Gregory (Mimi Rogers), the beautiful eyewitness to a brutal murder. Lured into danger and the dizzying heights of Gregory’s glamorous lifestyle, Keegan struggles to walk the line between protection and obsession — while trying to stay one step ahead of the psychotic killer. Acclaimed director Ridley Scott paints an erotically seductive portrait of high-stakes suspense in America’s power playground in SOMEONE TO WATCH OVER ME.

SOMEONE TO WATCH OVER ME Blu-ray
Special Feature
· New interviews with Writer Howard Franklin and Director of Photography Steven Poster.

Tags: Ridley Scott, Shout Select, Someone to Watch Over me