Steph and HHH come down and recap what Becky did last week before she comes out and says the swelling’s gone down on Steph’s face. Becky says the McMahons have been screwing people over for decades and they’re trying to take her WM main event slot. She has to apologize or they’ll take her title shot away – well, that sure kills Becky. Bayley and Sasha, Liv and Sarah, and Nia and Tamina have a three way tag match to determine who is first in the chamber. Nia and Tamina cut a terrible inset promo about being big and strong. Nia crushes Bayley with the Samoan drop and wins. Finn Balor tells Becky to bide her time and he’ll take Lashley’s title when he wants. Seth vs. Brock is hyped and Elias is mid-ring to sing before the LHP comes down to prevent that. He sings and they yammer on for a while and then Kalisto plays and Elias smacks him with another guitar. Thank God – this was all terrible. 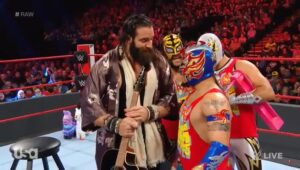 Sonya and Mandy talk about having Chamber experience and they’re now Fire and Desire. Lashley is out with Lio before Drew faces Balor. Lashley interferes for a DQ, so no one gets over. Kurt comes down and Corbin beats him up. Braun makes a save since the Olympian is no match for these guys. This all leads to a six man tag with Corbin locking on wacky holds to Kurt. Lashley hits a Yokosuka cutter to Balor, whose foot is under the rope for the fall, but Lashley gets the win. The ref restarts the match and Balor beats him with the double foostomp. This gives him the worst thing he could ask for – “the all important momentum!”.

Kevin Owens bowls and says he’ll be back in a month. He’s the lightest he’s been in a decade – he’s swimming in his shirt. Nikki Cross faces Ruby Riott before we get a Black History Month video and Becky talks to Ronda and they don’t even bother doing a picture in picture view of the match. Ruby Riott hits the terrible-looking Riott kick and wins. Seth comes out to talk for a while before Paul Heyman says he’s geat, but he’s not Brock. Dean Ambrose comes down to face EC3. EC3 hits a delays suplex for 2. Dean lures him into a cradle and wins. This is just talked over immediately by it being a lesson for EC3.

Alexa tells Becky to be true to herself and Becky says he’s never been genuine. Roode and Gable face the Revival to defend the tag titles. The faces hit a combo German suplex/blockbuster for 2. Hart Attack powerbomb gets 2 for FTR. Gable jumps into a shatter machine off the top and the Revival wins it. Backstage, they celebrate a bit. Becky, HHH, and Steph are out. Becky says that if two words are keeping her from her dream before getting cut off by a “suck it” chant from the crowd. She says she’s sorry and says they have a deal. Ronda comes down and Vince says that Ronda vs. Becky COULD be one of the best main event ever, but SHE THINKS SHE’S BIGGER THAN WWE, and now Charlotte is in the match. Also, Becky isn’t The Man – VINCE MCMAHON IS THE MAN and she’s out of the company for 60 days.