IDW Publishing June 2019 Solicitations Spoilers PLUS Hasbro and Sony Announce A Ghostbusters and Transformers “Merger” At Toy Fair 2019?! What Is Ectotron? 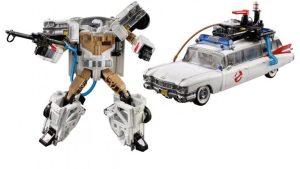 Both properties debuted in 1984.

The Ghostbusters may be used to dealing with threats from beyond the grave, but this summer, they’ll have to deal with something strange from beyond the stars, with Ecto-1 — the iconic vehicle from the original two Ghostbusters movies — revealed to be a Transformer as part of a joint celebration of the 35th anniversary of both franchises.

The reimagined vehicle — called Ectotron, a paranormal investigator robot in disguise — will debut as a toy released exclusively through HasbroPulse.com, GameStop and EB Games Canada later this year, available with two iconic accessories: Its own Proton Pack, and a Slimer figure. The figure will be packaged in box inspired by the original 1984 designs for the G1 Transformers line, complete with classic tech specs.

Ectotron is available to pre-order online now, with orders shipping in August 2019.

Plus a tease of June 2019’s Ecotron mini-series from IDW!

The crossover between Transformers and Ghostbusters doesn’t end with the Ecto-1 Ectotron toy release; IDW Publishing, which holds the comic book licenses for both properties, will release a 5-part Ectotron comic book series by Erik Burnham and Dan Schoening launching in June.