Joanie Laurer Aka Chyna To Finally Be Inducted Into WWE Hall Of Fame In 2019, But There’s A Catch!

She will be inducted into in the Class of 2019 as part of Degeneration X, but not on her own. 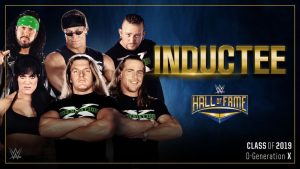 After she left WWE she entered into an x-rated career before her untimely passing. That has made her induction complicated for WWE seemingly until this year. The WWE Hall of Fame induction happens during Wrestlemania weekend.