…Arn Anderson has apparently been let go from WWE, this according to multiple sources.

Details are scarce, but multiple sources tell us Anderson — who is a WWE Hall of Famer, Four Horsemen and longtime backstage producer — exited the company on Thursday.

Arn joined WWE as a road agent not long after WCW was bought out in 2001. He was inducted into the WWE Hall of Fame in 2012 alongside the other Four Horsemen. 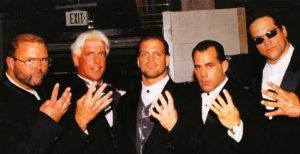 It’s unclear at this time what led to Anderson’s departure from WWE.

There have been several new producers hired by WWE, but its unclear why 60 year old Arn Anderson was released.

More to come as this story develops.