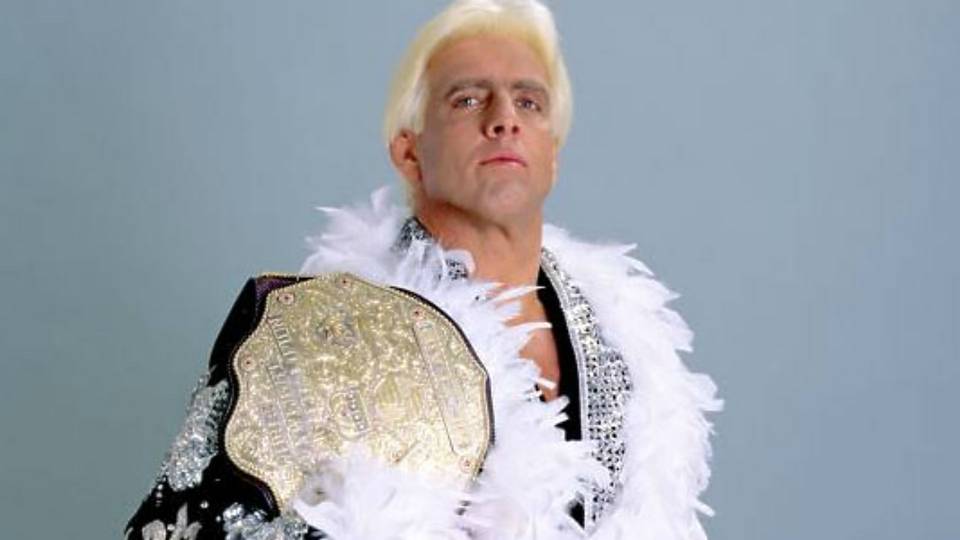 In that time we’ve seen wrestlers come and wrestlers go and, with the exception of Hulk Hogan, no-one has made as large an impact ion the pseudo-sport we all love and enjoy as ‘The Nature Boy’. As some-one who is a fan of the wrestling the 1980s onwards (I’m old enough to have watched Wrestlemania 1 live), I have seen a reasonable amount of Ric Flair matches. I enjoy watching Ric Flair matches. He can tell a story in the ring far better than the majority of others, a talent that seems to be lacking in today’s wrestling world.

Now, for this column, I was going to write about my favourite Ric Flair PPV matches. However, 2 things arose – first, the list was going to be too long; second, one year stood out above all others.

By sheer coincidence, that year is 1989, and that is 30 years ago, so a nice round number of synchronicity. Which also means it is important to remember Flair was 40 when this year took place.

So, I trawled through my video collection and here is Ric Flair in 1989 on NWA (as it was then) Pay-Per-View. (Oh, I don’t to play-by-play. Sorry.)

Ric Flair and Ricky Steamboat have a verbal showdown in the ring and… hang on! The challenger, the baby face, gets the better of the heel champion in the brawl? Where Flair is reduced to his underwear? You never see that anymore. And then, this leads to…

The trio of matches between Flair and Steamboat in 1989 is widely regarded as amongst the very best wrestling ever. And the fact it started with a classic match that no-one thought they could ever top just shows how awesome it is. It lasted about 25 minutes and it did not let up. A modern audience might be bored by strategic headlocks and a lack of high flying, but this was just awesome wrestling. And the chops from both men! Steam-boat’s small package to win during a figure-four attempt set the place exploding. I’m serious. Modern guys wish they could get this response for a victory… What a way to start the year.

The second of the trilogy, and somehow they managed to top the first match. These two went through an epic match that lasted almost an hour and kept that audience enthralled for the entire time. After about 20 minutes, Flair gets the first pinfall with a rollup out of a rollup out of a figure four. No, really. The psychology is off the charts as Steamboat drops elbow after elbow on the knee to negate the figure four. Then Steamboat locks in a double chickenwing for the submission at about 40 minutes. Then they do call-backs to the Chi-Town Rumble match and earlier in this match (did I say the psychology is off the charts?) as Steamboat locks in another double chicken-wing, Falir falls back, but doesn’t get his shoulders up in time and Steamboat gets the pin to retain after almost an hour. Holy f’n cow, what a match!

And we come to the final of the trilogy, which is my favourite match. They not only do call-backs to the previous two matches, but chop the living crap out of each other and this match packs in as much in 30 minutes as most modern wrestlers pack into 6 months. The ending comes after Steamboat injures the knee, Flair works it, and then is cradled for the pin when a move attempt fails because of the knee. Steamboat’s selling is a thing of beauty.
Now, post-match… there are judges outside to make sure there is a winner, one of whom is Terry Funk. He feels disrespected and so he challenges Flair, Flair ignores him and he piledrives Flair through a table at ringside. Back then, that was like the kiss of death! And it set up perfectly the next feud, and so, of course, had to turn Flair face, which he had started to do by complimenting Steamboat after the match. Perfect transition there, not forced and believable.

Oh, and for what it’s worth, the additional Flair-Steamboat WCW match – like that extra film after the original trilogy, bringing our favourites back – which is from 1994 is also well worth catching.

Clash Of The Champions VI – Guts And Glory: June 14

Ric Flair in neck brace talks to Jim Ross about his injury and how it’s affecting him. Babyface interview, without the usual over-the-top Flair-isms. A pleasant change. And yet, still intense.

This card had a pretty decent War Games match in it, which Flair and Funk had to follow. So they did, with an intense brawl with lots of blood from both guys and a post-match beat-down (Funk helped by the Great Muta). After the technical masterpieces of the previous three matches, to see such a wild brawl was such a contrast it shows how good Flair really was to switch it up so successfully. The ends comes with another inside cradle reversed to inside cradle for the Flair pin after about 15 minutes or so. So then we have the beat-down, orchestrated by Gary Hart (what an under-rated manager!) until Sting, of all people, makes the save… The brawl just goes on and is awesome.

Slater is here instead of Funk for whatever reason. Not so much a wrestling match as a fight between the two teams, with some nice moves and some intense brawling punctuated by one of the hottest crowds. End comes when Sting is blinded by a Muta mist spit and Funk suddenly appears and suffocates Flair with a plastic bag! Holy f’n cow! You would never see that nowadays! So they throw the match out, but this was super-intense. Look, not the best match of the year for Flair, but still a great match anyway. Any other year – wow, one of the top 5 matches easily…

After the previous Clash, Funk is now in and they decide to do this one inside the Thundercage, sort of like Hell in the Cell, but with no roof, but electrified bots around the top. Seriously – wow. Oh, and your ref is some old guy named Bruno Sammartino. And the inner can only come when the second throws in the towel (Gary Hart for the heels, Ole Anderson for the faces). Just a brawl, really. I wasn’t overly keen on it, though it had a definite intensity and it did not outstay its welcome. Look, again, not a bad match by any stretch of the imagination, but compared to the rest of the year, it does fall in comparison. The ending is also weird. Anderson and Hart get into it on the outside, Anderson decks Hart which sends the towel flying, Sammartino sees it, and calls the match for the faces. Meh ending, not too shabby a match.

An “I Quit” match. That’s all you need to know. It set the bar for I Quit matches, a bar which has very rarely been reached by anybody else. This was a super-intense brawl, which shows again how good everyone was because, after everything since Wrestlewar, it had to be. That’s long arc story-telling, something maybe the current lot of writers should have a look at. Back and forth to start with until the end, where Flair just destroyed Funk’s knee for like five minutes before slapping on the figure-four until Funk has to quit. Simple, straight-forward and absolutely brilliant.

Okay, this was an iron man tournament featuring Ric Flair, Sting, The Great Muta and Lex Luger. There’s points involved and matches have a 15 minute time limit. Unfortunately, after the greatness that was the rest of 1989, this was way too rushed and felt thrown together almost. Here are Flair’s matches:

Ric Flair def The Great Muta by pinfall
Muta moonsault hits Flair’s knees, Flair pins him, and, after 5 minutes, that’s it. This was like a TV math; Muta was TV champ and he was treated like a jobber.

Ric Flair v Lex Luger – time limit draw
Dull match, as things often are when both guys know they’re going for the draw. Flair gets the figure-four but Luger holds on till the time runs out. My tape is clipped to all hell, but I think that only improved this.

Sting defeated Ric Flair by pinfall
Match of the show, and a fine way for Flair to finish the year. This is like a Cliff’s Notes version of Sting v Flair, but that’s okay, because after the rest of the show, it gives us something worth watching. Back and forth match with some nice little bits thrown in and a cradle roll up by Sting out of a figure-four attempt.

And there you have Flair on Pay-Per-View in 1989. What an amazing year for one man to have. I cannot think of another wrestler to have such consistently awesome matches on the big stages throughout a single year. 1989 Flair was a wrestling genius. Wow.

Happy 70th birthday, Mr Flair. You are still the best.