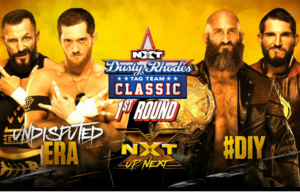 The show extra-long show (about an hour and a quarter) starts with a great video hyping the Dusty Rhodes Tag Team Classic, with a each team getting a few words in. Particularly interesting is Tommaso Ciampa saying everything for his team while Johnny Gargano sits next to him solemnly before jumping out of his seat to palm the camera and end the video.

Amsterdam Black & Ricochet def. Fabian Aichner & Marcel Barthel {Quarterfinal Match}
Black pinned Aichner at 8:18 after hitting the Black Mass. The European Union didn’t really have a chance, seeing as how they had that squash match earlier in the day in England and then had to rush to the airport to take a transatlantic flight to make it to this show on time. This match was balls to the wall tag team fun, and I only wish it had been given five more minutes. Black and Ricochet, who have been looking fantastic on the main roster lately, cranked it up a notch here. The European Union was game too, bringing all the goods. I’d like a rematch but it’s unlikely we’ll ever see one. ***¾

Earlier at the Performance Center, Keith Lee’s training session was interrupted by Dominic Dijakovic. They were kept separated, but they’ll have a rematch in two weeks.

Steve Cutler & Wesley Blake def. Danny Burch & Oney Lorcan {Quarterfinal Match}
The Forgotten Sons won after hitting the double stomp/inverted DDT combo at 8:23. Look, it’s not that the Sons are bad, it’s just that there’s nothing special about them. They don’t show much personality in the ring and thus have little identity in any match outside of two guys who can be relied upon to not fuck anything up. Against Lorcan & Burch in front of a hot crowd like this, that means you get a high-energy match no matter what, but I feel like the baldies could have done more against almost any other team in the tournament. ***¼

Velveteen Dream comes out to celebrate his newly won North American Championship. Matt Riddle interrupts because this show is amazing and knows exactly what match ups I want to see. Riddle is just here to say hi, which is so adorable I want to die. Also he thinks he’d make a good champion. Dream thinks Riddle is high, and demands the spotlight back. That was a very fun exchange, and it was really nice to see Riddle more comfortable on the mic.

Io Shirai and Kairi Sane are interviewed. They know that Bianca Belair is good, but it’s Shirai who has pinned Baszler. Shirai and Belair will fight next week to see who gets the shot at Baszler.

Trent Seven & Tyler Bate def. Angelo Dawkins & Montez Ford {Quarterfinal Match}
Mustache Mountain won at 7:22 after they hit a Burning Hammer/double stomp combo on Dawkins. Mustache Mountain had a potentially prescient backstage stare down with the War Raiders earlier in the show, so we’ll have to see if they end up parlaying this momentum into a tournament win. I’d have felt a lot better if the Street Profits and Forgotten Sons spots had bit swapped, as I feel if they’re going to push one of the less successful teams it should be the Profits. This match was a bit on the sloppy side, but the Profits really connect with the crowd and have such a fun and easy to identify strong man/fast man dynamic. I felt like the British boys were a step off their game, but even one step off for them is a few steps above almost everyone else. ***

Johnny Gargano & Tommaso Ciampa def. Bobby Fish & Kyle O’Reilly {Quarterfinal Match}
Ciampa pinned O’Reilly in 14:03 after hitting Meet Me in the Middle. The crowd lost it when Gargano and Ciampa walked to the ring to the DIY entrance music. More than the spectacle of DIY being back together in a formal capacity, I was really impressed with the Undisputed Era and how the Fish/O’Reilly team is different enough from Strong/O’Reilly while still being very intense and entertaining. Some of the tandem offense in this match really blew my mind. I think it’s safe to say this is already the best Dusty Classic from an in-ring perspective. The War Raiders come out to mouth-breathe at DIY. These stare downs now seem like a red herring. ****

This is in the running for the best episode of NXT TV ever. You had four good – great matches. You had backstage segments that are all leading to matches that we actually want to see. You had a whimsical confrontation between Dream and Riddle. Next week is stacked too so I’m hoping it gives this show a run for its money.