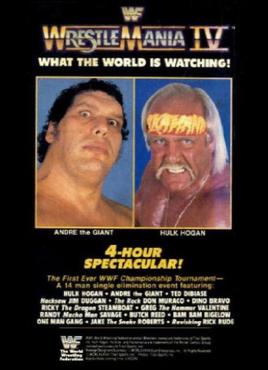 Gorilla Monsoon, Jesse Ventura, and Bob Uecker are on commentary.

Houston is the first one eliminated, thanks to Davis. Blair and JYD team up to eliminate Sika. Steele is just hanging out on the floor, doing nothing of note. He gets into an argument with Neidhart over something, and pulls him out. I don’t see how that’s legal. The Bees and the Rougeaus fight each other, and it results in Blair, Rougeau, and Brunzell getting eliminated in short order. JYD eliminates Bass. Zhukov eliminates Jim, who was Uecker’s pick to win. Referees make Steele leave ringside for no discernable reason. Roma eliminates Davis, and Brown eliminates Powers. Patera dumps Volkoff, and then Brown gets rid of Patera and Zhukov. Race eliminates Jacque, and then JYD eliminates Race and we’re down to the final four – Bad News Brown, Bret Hart, Junkyard Dog, and Paul Roma. Brown quickly eliminates Roma and then joins forces with Hart to battle the JYD, and they eliminate him together. It looks like Brown and Hart are going to split the winnings, but of course Brown double-crosses hart with the Ghetto Blaster and then beats him up a little before tossing him out. The last couple of minutes were fun but nothing leading up to it meant much of anything.
Rating: *¾

~MATCH #2~
Ted DiBiase (w/ Andre the Giant and Virgil) defeats Jim Duggan) at 4:54 in a First-Round Tournament match. This is a style clash, as DiBiase is a technician and Duggan is a brawler. Duggan gets going and drops DiBiase with a huge bodyslam. He sets up for the Three-point stance clothesline and Andre trips him up. Andre and Duggan tussle, and DiBiase plants a knee in Duggan’s back. One fist drop later and DiBiase gets the pin. Brief, but an important piece in the tournament puzzle, as it set DiBiase and Andre up as a duo working together.
Rating: **

~MATCH #3~
Don Muraco (w/ Superstar Billy Graham) defeats Dino Bravo (w/ Frenchy Martin) by disqualification at 4:53 in a First-Round Tournament match. This is a sloppy brawl from the get-go, with zero sense of psychology. They’re just doing stuff out there. Important to note though, Bravo invents stealing your opponent’s finisher by delivering a jumping piledriver. Muraco refuses to lose to his own move though, and the match goes on. When Muraco is building momentum, Bravo pulls the referee in the way and Muraco accidentally decks him. Bravo hits the Side Suplex, but the referee crawls over and disqualifies Bravo for pulling him into harm’s way. Muraco was good once upon a time and Bravo was good once upon a never, so this was pretty bad.
Rating: ¾*

~MATCH #4~
Greg Valentine (w/ Jimmy Hart) defeats Ricky Steamboat at 9:12 in a First-Round Tournament match. Two former Intercontinental Champions here. Steamboat controls the early going with his speed and precision. Valentine recovers and begins to wear Steamboat down with his usual repertoire of strikes and holds. Steamboat make the big comeback and goes up top for the Diving crossbody, but Valentine rolls through and hooks the leg to get the pin. These two meshed well together, and I actually would’ve liked to see them in a longer match.
Rating: ***

~MATCH #5~
Randy Savage (w/ Miss Elizabeth) defeats Butch Reed (w/ Slick) at 5:07 in a First-Round Tournament match. Reed uses his power to keep Savage trapped in a corner or on the mat. When he goes out of his comfort zone to the top rope, he gets distracted by Elizabeth, and Savage slams him down. Savage follows with the Savage Elbow to get the win. Not a whole lot going on here, but it wasn’t horrible for the time they got.
Rating: *½

~MATCH #6~
One Man Gang (w/ Slick) defeats Bam Bam Bigelow (w/ Oliver Humperdink) by countout at 2:56. Gang attacks at the bell and away we go. I believe Bigelow came into this match with an injury of some kind, and it’s definitely effecting his mobility. When the match is going Bigelow’s way, Slick pulls the top rope down on him and he crashes to the floor. Bigelow is unable to get back in the ring before the 10-count and Gang gets the win. Not good, but at least they kept it short.
Rating: ¼*

~MATCH #7~
Jake Roberts and Rick Rude (w/ Bobby Heenan) wrestled to a 15:00 Time Limit Draw in a First-Round Tournament match. These two are pretty evenly matched, and they trade control in the opening minutes. Roberts goes for an early DDT but Rude is able to avoid it. Rude takes control and grounds Roberts with a reverse chinlock. After what seems like forever, Roberts breaks the chinlock with a jawbreaker. Roberts gets all fired up and hits Rude with the Arm wrench short-arm clothesline, but when he tries the DDT again Rude blocks it. Rude goes back on offense and Ventura makes mention of the time limit. Moments later, the time limit runs out while Rude has Roberts in a cradle (with his feet on the ropes), so neither man advances. These two had some good matches together but this one just kind of meandered until the bell rang.
Rating: *½

~MATCH #8~
Ultimate Warrior defeats Hercules (w/ Bobby Heenan) at 4:29. Both men try to assert their dominance, showing off their prodigious power. The fight spills to the floor and they club at each other a bit. Then they go back to the ring, and pound on each other some more. Not a lot of technique on display here, until Hercules busts out an inverted atomic drop. Hercules puts on the Full Nelson, and Warrior pushes off the top turnbuckle and drops both men’s shoulders to the mat. Warrior gets his one shoulder up so he got the pin. This was as terrible as you’d expect, so at least they kept it on the short side.
Rating: ½*

~MATCH #9~
Andre the Giant (w/ Ted DiBiase and Virgil) and Hulk Hogan wrestled to a double-disqualification at 5:22 in a Quarterfinal Tournament Match. Hogan charges into the ring and Andre is ready for him. When Hogan fires back, DiBiase jumps up on the apron and gets a beating for his troubles. The tactic worked though, as Andre takes control of the match and wears Hogan down. When Hogan starts Hulking Up, Virgil gets on the apron to distract the referee and DiBiase gets in the ring with a chair. Hogan takes control of the chair and bashes Andre with it. Andre fights back and hits Hogan with the chair. The referee calls for the bell and disqualifies both men. This was pretty bad, as it didn’t have the historical significance or atmosphere of their WrestleMania III match. Also, the finish was awkward, as Hogan hit Andre with the chair first right in front of the referee, but there was no bell until Andre reciprocated the chair shot.
Rating: ¼*

~MATCH #10~
Ted DiBiase defeats Don Muraco (w/ Superstar Billy Graham) at 5:44 in a Quarterfinal Tournament Match. The winner here will get a bye right into the finals. Muraco attacks right away and brings the fire. DiBiase fights back and wears Muraco down. When the original Rock tries to make a comeback, DiBiase catches him with a Stun Gun to get the pin. Okay match for the time they got, and I liked the finish.
Rating: **

~MATCH #11~
Randy Savage (w/ Miss Elizabeth) defeats Greg Valentine (w/ Jimmy Hart) at 6:06 in a Quarterfinal Tournament Match. These two are somewhat evenly matched. Valentine appears to be in control and he starts going for the Figure-Four Leglock Savage counters to an inside cradle to get the pin. Everyone knows Valentine wouldn’t even get warmed up in a six-minute match. I call shenanigans! Match was okay.
Rating: *¾

~MATCH #12~
Brutus Beefcake beat Intercontinental Champion Honky Tonk Man (w/ Jimmy Hart and Peggy Sue) by disqualification at 6:30. Honky has been the Champion since 6.13.87, and this is his fifteenth defense. It’s all Beefcake in the early going, and Honky does everything he can to avoid him. Honky gets a brief period of offense but this match almost completely belongs to the challenger. Beefcake puts on the Sleeper hold and Honky is fading. Jimmy Hart gets up on the ring apron and knocks the referee out with the megaphone. So, Honky and the referee are both out, and Beefcake wants to cut some hair. Jimmy Hart is the first victim, but before any more damage can be done, Peggy Sue wakes Honky up with a pitcher of water, and referees help their fallen compadre back to his senses. Beefcake is announced the winner by disqualification. That was pretty one-sided with a lame finish. Nothing much to see here.
Rating; *½

~MATCH #13~
The Islanders (Haku & Tama) & Bobby Heenan defeat The British Bulldogs (Davey Boy Smith & Dynamite Kid) & Koko B. Ware) at 7:30. Koko and the Bulldogs control most of the opening minutes. Heenan refuses to get in the ring unless one of the opposing team members is in a compromised position. The referee loses control and the Islanders take Koko out. Haku and Tama then pick Heenan up and slam him on top of Koko for the pin. That was decent enough for the time allowed, plus the fact that Haku and Tama were involved.
Rating: **

~MATCH #14~
Randy Savage (w/ Miss Elizabeth) defeats One Man Gang (w/ Slick) by disqualification at 4:05 in a Semifinal Tournament match. Gang has a big advantage here, since he sat out the last round with a bye and Savage had to tangle with the Hammer. Savage has to use his quickness to avoid the size and power of the 747. Slick gives Gang his cane, and the idiot uses it right in front of the referee to draw the disqualification. I love Savage, but this kinda sucked. What a dumb finish.
Rating: ½*

~MATCH #15~
Demolition (Ax& Smash, w/ Mr. Fuji) defeat World Tag Team Champions Strike Force (Tito Santana & Rick Martel) at 12:33 to win the titles. Santana and Martel have been the Champion since 10.27.87, and this is their tenth defense. The match starts off hot, and a fast pace certainly favors the Champions. Both teams trade control, several times, but in the end Mr. Fuji’s cane is the difference maker, allowing Demolition to win the titles and get a big face pop. Match was pretty pedestrian and the crowd certainly didn’t care.
Rating: **

~MATCH #16~
Randy Savage (w/ Miss Elizabeth) defeats Ted DiBiase (w/ Andre the Giant) in the Tournament Final at 9:27 to win the WWF World Heavyweight Title. The title has been vacant since 2.5.88, and Andre beat Hogan and tried to give the belt to DiBiase, a transaction that WWF President Jack Tunney deemed invalid. Thus, the title was vacated, and the tournament was announced. Savage has to contend with Andre in addition to DiBiase. As Andre keeps interfering, Savage sends Elizabeth to the back. Elizabeth returns with one Hulk Hogan! Now things are all even. DiBiase controls quite a bit of the match, until get heads up top. Savage slams him down but misses the Savage Elbow. DiBiase puts Savage in the Million Dollar Dream, and the referee gets distracted. That allows Hogan to sneak in and hit DiBiase with a chair. Savage goes back up top and nails the Savage Elbow to score the pin. These two had much better matches elsewhere, when they weren’t wrestling for the fourth and third times, respectively. I’m not a huge fan of the finish but otherwise this was a solid if unspectacular way to get the title on the Macho Man.
Rating: **¾

A2Z Analysiz
This show is LONG. It has more matches than any other WrestleMania, so it’s at least the answer to a trivia question. Only the fourth match of the show reached three stars, which out of 16 matches is just brutal. Two things this show has going for it is the tremendous four-match performance from Savage, and Demolition winning their first Tag Team Titles. The rest is a tremendous snore.