Italian cinema always went with big trends to get international distribution for their films and pack the less prestigious theaters with fans who got into a trend. This is what brought us Hercules flicks, Spaghetti Westerns and Giallo. Towards the end of the ’70s, Italian producers needed something to get people into the theaters as television in Italy had finally gotten its act together. So they embraced a genre too gross for TV: Cannibalism. The films would be shot in a jungle location and try to outdo the ghoulish nature of zombie films with stomach churning special effects. While the genre spawned maybe two dozen titles, they caused headlines as governments tried to ban them and arrest their creators for fear that they really did kill and eat people. One of the rabid fans of the genre was Eli Roth (Hostel) who finally got his chance to direct his own cannibal adventure in The Green Inferno. He sends a bunch of kids into the jungle wanting to save the rain forest and the native tribesman from deforestation. Except they discover that the local would rather eat them. Can they survive their goodwill mission? Now the movie is getting a Scream Factory Blu-ray Collector’s Edition that includes the soundtrack on CD. Here’s the press release from Scream Factory with a list of bonus features: 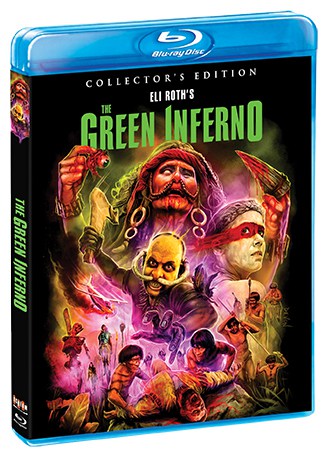 “A glorious throwback to the drive-in movies of my youth: bloody, gripping, but you can’t look away.” – Stephen King

The mastermind behind the Hostel franchise and Cabin Fever, horror auteur Eli Roth, serves up a feast of gut-wrenching terror in the gruesome fear-fest The Green Inferno. On April 23, 2019, Scream Factory proudly presents Eli Roth’s gory spectacle The Green Inferno in a two-disc Collector’s Edition set, with the film on Blu-ray and the original motion picture soundtrack by Manuel Riveiro on CD. This release comes packed with bonus features including a brand-new interview with Eli Roth, the new featurette Uncivilized Behavior: Method Acting in The Green Inferno – featuring new interviews with actors Lorenza Izzo, Daryl Sabara and Kirby Bliss Blanton, nearly an hour of never-before seen behind the scenes footage, audio commentaries, a making-of featurette, and much more! Fans who preorder the set now at shoutfactory.com will receive an exclusive poster, while supplies last.

“I’m so excited about the bonus materials. We were never able to put the making-of on the original release and the footage we have from the amazon is incredible.” says filmmaker Eli Roth “It was amazing to relive the experience of making The Green Inferno. We took our crew further than any narrative film crew has ever gone and the stories are even more insane than I remember. We have fantastic new interviews with cast members Lorenza Izzo, Kirby Bliss Blanton and Daryl Sabara, who all told incredible stories about making the film. Watching it now I still cannot believe we made it out alive with no injuries, I don’t think you could ever do a film like this today the way we did it. I am still in awe of my fearless cast and crew, and I fell in love with the village all over again. Watching the behind the scenes will really enhance your enjoyment of the movie, I can’t wait for everyone to see it. “

In The Green Inferno, a group of student activists fly to Peru determined to protect the Amazon rainforest, only to crash-land deep in the jungle. Captured by a pack of bloodthirsty cannibals, the survivors suffer unspeakable acts of butchery at the hands of the very tribe they were trying to save. A non-stop barrage of carnage and chills, The Green Inferno is an unhinged blast!