The Shield starts things off with their farewell address. Roman wants a one on one match tonight and Dean has business too, but he doesn’t know what it’ll be. He also hypes that Seth’s taking the Universal Title from Brock at Mania. Heyman comes out and talks about Brock takes out everyone that comes his way – no matter what the challenge winds up being. He can have five, six, or 12 days to prepare for a match – whether it’s with AJ Styles, Daniel Bryan, or Finn Balor and now he has even more time to prepare for Seth. He shows a video hyping up Brock and then says he doesn’t know Brock – but there’s a man who does and it’s Shelton. Shelton was Brock’s wrestling coach in Minnesota and teamed with him in OVW. He sends Seth to Suplex City before a match. The story of this is is that Shelton taught Brock a lot of what Brock knows, so he’s doing Brock’s spots. 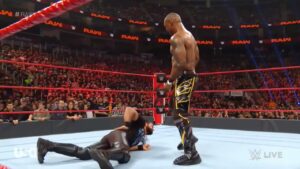 Seth counters a fireman’s carry into a superkick, setting that up as a possible F5 counter at WM. A superkick to the gut leads to the curb stomp for a win. Roman vs. Corbin is announced for later before Balor is out to face Lashley. Lashley gets a wide variety of random holds for a while to kill some time. Slingblade gives Balor a brief reprieve before a shotgun dropkick hits and the bell is run by Lio Rush. This leads to HBK-Shelton’s superkick being recreated with a spear and Lashley regains the belt. Corbin appears to stand on several boxes to be interviewed by Charly and we get clips of him being callous before. Ronda walks backstage before coming out and making no contact with anyone.

We get a recap of Ronda destroying people before she rambles on for a while about this being church, but not being a sanctuary for anyone. She did what she did last night to expose Charlotte, Becky, and WWE as carny con artists and no one can stop her. She robotically says that WWE can make this a handicap match and she’d be embarrassed if she even broke a sweat against them. Becky, Charlotte, and WWE are jokes. Cole says she’s being RUDE! Dana Brooke comes down to stand up for WWE AND THE WWE UNIVERSE. Oh thank God. She’s on the ass end of an ass-whooping and eats a near brainbuster-style Piper’s Pit. Ronda attacks a ref and slaps Dana with her jacket.

HHH-Batista video airs showing off HHH saying THIS ISN’T THE CHARACTER, IT’S THE MAN. And after this goofiness, Black and Ricochet beat Gable and Roode in a totally nothing match. Black and Ricochet have no chemistry together at all. Revival beats them up before we see WWE’s roster meeting with young cancer patients. Alexa announces that she’ll be the host of WrestleMania and gets a You Deserve It chant for the announcement.

Colin Jost’s meeting with Braun is recapped before he gifts Braun a car, and then Braun destroys it. This is just a way for them to plug a toy set featuring the exact same car – only the toy car may be more durable. Elias sings and gets interrupted by Jose and the posse and he beats them up. Lacey Evans comes out and then walks back – but not before Nia and Tamina come out and wave her off. The match barely gets started before Beth and Tamina go at it and we get another bad brawl. Then Nia and Tamina brawl with Sasha and Bayley, so I guess it’ll be a three-way for the women’s tag title at WM. Okay, now do nothing so the suffering for this angle can at least end now.

Zelina Vega talks about being inspired by J-Lo and fighting for her dreams. Paul Levesque as HHH comes out in his black leather jacket. Batista comes out in a ridiculous shiny silverish grey suit that only he can wear. He says that all he’s wanted to do is end his career on his terms. He learned from HHH and Flair and everything that’s happened has been learned behavior. Batista has goons out for his own protection since HHH always has a sledgehammer, and he’ll end things on his terms. He says he quit due to HHH holding him down and looking down on him. Batista wants one last to not only end his own career – but end HHH’s own career and HHH agrees, and makes it a no holds barred match. If HHH works to his strengths and doesn’t make it a 25 minute slog and we get something more akin to Brock vs. Goldbert at Mania, it’ll be perfect.

Kurt comes out and says that Pittsburgh is his hometown and he wanted to announce that at WM, he’ll have his farewell match – so wisely, it’s not being worded as a retirement match. He thanks the fans and the roster and we get Crews vs. Angle because they’re long-time friends and apparently Crews was inspired to wrestle by Kurt. Well maybe if they told even a single bit of this story before, it might mean anything. Corey talks about being in Pittsburgh and Kurt being a sportscaster for a time – and being better at wrestling than that. Kurt goes for the Angle Slam, but Crews avoids it and lands an enzuiguri and a standing moonsault for 2. Frog splash misses and the Angle Slam gets the win.

Roman comes out to face Corbin, but Drew attacks him with a series of claymores. Roman comes up selling a concussion before Seth comes down to help him. Dean vs. Drew in a falls count anywhere match. Drew destroys him and beats him with a Claymore with Dean trapped in a rail and falling down the steps to be pinned. Cole hypes Drew up as the most dangerous man in WWE, which is how he should’ve been booked since at least being separated from Dolph. Instead, they’re telling this story a bit late – but it should at least lead to a big Mania match with Roman and his biggest overall career match.