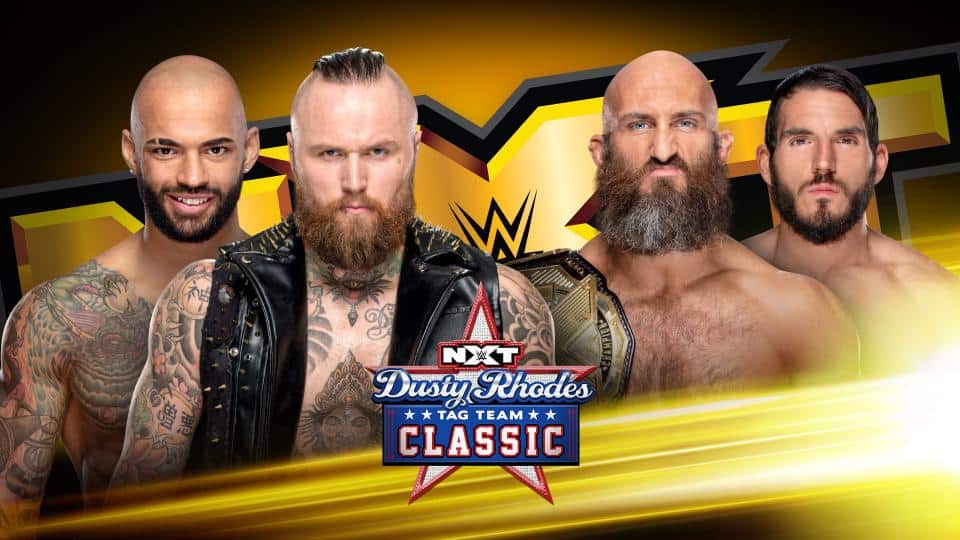 Steve Cutler & Wesley Blake def. Trent Seven & Tyler Bate {Semifinal Match}
The Forgotten Sons won at 9:39 after Jaxson Ryker got involved, leading to the legal men hitting the stomp/DDT combo on Seven. Once again, the Sons could have been absolutely any two wrestlers with some skill in there, and their only defining characteristic is having Ryker on the floor and having the ability to not be awful. They shouldn’t be getting this far in the tournament. **¾

Matt Riddle is interviewed about his desire for a North American Championship match. Adam Cole interrupts and calls him undeserving. Riddle wants all issues like this settled in the ring.

Bianca Belair nc. Io Shirai {Number One Contender Match}
The match ended in 5:28 when Shayna Baszler ran in and attacked both ladies. This was kind of an extended squash for Shirai, though Belair was coming back before the end. Kairi Sane tried to make the save but Baszler is able to put all three of them down. She did it without her cronies too, making it seem like none of these three are contenders right now. **¾

They remind us that Keith Lee vs. Dominik Dijakovic is happening next week, but me’thinks there’s actually going to be a change of plans. Meanwhile, Baszler says nobody deserves a title shot. She is told that William Regal is more or less punishing her by booking her in a championship match at Takeover against all three women she just choked out.

Aleister Black & Ricochet def. Johnny Gargano & Tommaso Ciampa {Semifinal Match}
Black & Ricochet hit their finishers on Ciampa at 13:27 to get the win, capping off a big week for them. Gargano & Ciampa wore their DIY shirts during their entrance, but it became clear near the end of the match that this was Gargano’s way of luring in and embarrassing Ciampa. He’d faked an injury, caused Ciampa to get pinned, then when Ciampa inevitably turned on him Gargano was ready to block it, attack Ciampa, superkick him on the stage and celebrate with his wife. The whole production was very satisfying. The match itself was a notch below what it probably could have been, but coupled with the post-match angle you’ve got what would have been a great final storyline beat heading into the end of this feud. ****