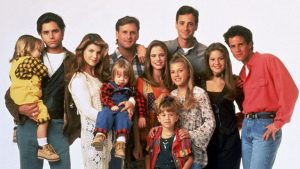 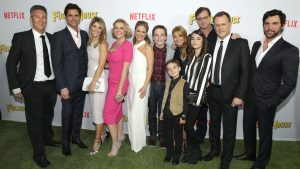 This follows Loughlin being dropped from Hallmark Channel which aired her popular Garage Sale Mystery series.

The actress won’t return for the show’s final season in the fall after being indicted in a college admissions bribery case.

A day after Hallmark Channel cut ties with Lori Loughlin, the actress looks to be out of Netflix’s Fuller House as well.

Loughlin and husband Mossimo Giannulli were among 50 people indicted in a nationwide college admissions bribery case earlier this week. She has had a recurring part on Fuller House, reprising her role from the 1987-95 ABC sitcom Full House. She appeared in 13 of the show’s 57 episodes through season four.

The show will air its fifth and final season on Netflix in the fall. Filming hasn’t started yet, and sources tell The Hollywood Reporter that production won’t be impacted by Loughlin’s legal issues as there are no current plans for her to return.

Netflix and Warner Horizon Television, which produces the series, declined to comment.

Loughlin was taken into custody Wednesday after being named in the indictments, which allege she and Giannulli paid $500,000 to a college prep business run by William “Rick” Singer to ensure their daughters would be admitted to the University of Southern California. Others named in the case include Hollywood investor Bill McGlashan, actress Felicity Huffman and administrators and athletic coaches at USC, Stanford, Yale and the University of Texas.

Following the indictment, Hallmark Channel said it was ending its relationship with Loughlin, a regular on the cabler’s series When Calls the Heart and star of its Garage Sale Mystery movies. She also appeared in several of the channel’s popular Christmas movies.

Sunday’s episode of When Calls the Heart, which is in its sixth season, has been pulled from the schedule. Hallmark says it’s “evaluating all creative options” regarding the show’s future.

…her supporting role in the When Calls The Heart series plus…

…her Christmas specials as a lead.

More on this scandal as it develops.