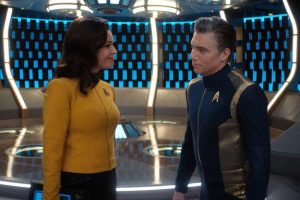 …CBS All Access has big plans to expand the Trekverse, but Star Trek: Discovery is slimming down.

One of the biggest cast additions for the current second season of Discovery was Anson Mount, who came on board as Captain Christopher Pike of the USS Enterprise. He was joined by Rebecca Romijn, who was tapped to play another classic Star Trek character, Number One, a member of Pike’s crew.
Both are set to leave at the end of the season, we have learned.

According to sources close to the series, both Hell On Wheels alum Mount and Romijn had strictly one-year deals; the duo had been contracted only for Season 2 arcs as part of a plan to sync up Discovery with the original Star Trek lore by the end of the new series’ second season heading into Season 3…

This is not unexpected considering Star Trek lore and the fact that the USS Discovery was co-opted for Captain Pike’s mission while his USS Enterprise is being repaired.