WWE spends a few minutes congratulating themselves over the WM 35 main event being the Raw women’s three way. A beat the clock challenge is announced with those competitors being in a beat the clock challenge against all of the members of the Riott Squad…for some reason. Bragging rights, power, time filler. Ronda buries the stupid challenge and takes credit for the main event. Becky comes down to huge applause and says that she makes Ronda better and at WM, she’ll ned it with the title in her hand and Ronda’s head under her foot. Charlotte talks about being hand-picked to be the main event and Woos. That about sums up her character now sadly. 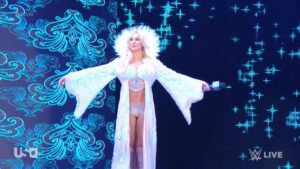 Sarah Logan runs around a lot and lasts longer than Cat Zingano did. Sarah gets her wacky inverted sharpshooter and then gets armbarred over the rope. Step-up elbow leads to an armbar and a 1:25 win. Charlotte only gets 1:25 to win and can’t get Ruby to tap in that time. Charlotte boots Becky Becky gets a jackknife pin and wins with 7 seconds to spare. Jinder and Lashley face Balor and if Balor wins, he gets a shot at WM. Double stomp hits Jinder and Balor wins to get a title shot. Also, Lashley and Lio Rush are friends again at least tonight.

Elias sings a bit in NYC before Aleister and Ricochet come down to face The Revival, who finally get an entrance. Black Mass and a 630 lead to a quick win for the babyfaces, who may or may not get a title shot at WM. Drew calls out Roman, who comes out and brawls before falling to the Claymore. They hype up Joe vs. Angle as being a renewal of one of Angle’s longest rivalries and then Dean challenges Drew for a last man standing match. IT’S BOSS TIME comes out to face Nattie before Nia and Tamina come down and brawl. Beth goes for a Samoan drop on Nia, but Tamina superkicks her. Glam Slam to Tamina gets a “you still got it!” chant.

Hart Foundation HOF video airs while Nattie is in the ring crying. Well that’s just a bit disgusting. Kurt is asked about facing Joe and he talks about thanking Joe for coming to Raw and he wants to leave on his terms. Kurt says its his last match in Boston and Corbin says this tour is a showcase of Kurt and then says he’s old and should’ve retired 10 years ago. Corbin says he’ll take Kurt’s legacy away, setting up a nice win for Kurt at WM. Alexa comes out for her show and then Bayley and Sasha are interviewed and say they’ll take anyone on at WM.

Alexa and Braun are all goofy for the talk show and the SNL guys will be in the Andre battle royal with Braun. Elias gets a quarter in front of MSG and gets in a line about people paying a lot to see him in NYC, which feels a bit like a knock at ROH for the MSG show. Corbin beats Apollo Crews quickly. Ronda, Charlotte, and Becky will be on Sportscenter. Beat the Clock is recapped before Seth comes out to talk about Brock. Boy is their angle cold. Heyman talks smack before Seth chases him down and he takes a bump and blames Brock for what he said. Seth says that WE are going to take the title from Brock.

Kurt comes down and Joe says that he’s forgotten his flowers for him, but luckily, he isn’t a sentimental person. Tonight, he’ll give him a special gift at WrestleMania season and he’ll send him out of Boston with a good night’s sleep. Joe slugs away at him and lands the snapmare and kick before dropkicking the back. Elbow suicida hits and Joe hits a senton. Rolling Germans and the Angle slam gets 2.9. Joe goes for a muscle buster but gets shoved off and Kurt gets what will politely be called a missile dropkick for 2. Joe gets locked in the choke and rolls into a cradle to win. This was a good slow motion greatest hits version of their final TNA matches.

HHH talks about Batista being slow and not figuring out that he was a master manipulator and calls him stupid for thinking that the moon was made of cheese. HHH says that Evolution took him from being a Deacon who followed D-Von Dudley around and when he left Evolution, he was World Champion and says that he quit when he realized he couldn’t beat Cena. He reads a long, rambling note from Batista with demands and he wants HHH to put his career on the line. HHH says that Batista beat up a 70 year old man to get a match at Mania. HHH says he isn’t obsessed with Batista beyond wanting to kick his ass. HHH says that at this point, if he can’t beat a delusional douchebag, he has no business being in the ring and he’ll put it on the line against him.

Elias sings a bit and then Angle vs. Rey is announced for next week’s Raw and Charlotte, Becky, and Ronda team up to face the Riott Squad. Why on Earth would either of the WM main eventers agree to that match? Drew beats Dean in the last man standing match, with Dean getting minimal offense in and Dean looking incredibly strong. They’re getting the Claymore over as a killer move and doing a better job of that than TNA ever did.