Steph comes out to start the show and teases putting herself in the match as an April fool’s joke before saying that all titles are on the line and one person brings home all the gold. Brock and Heyman comes out and then Seth brawls for a bit with Brock and hits a low blow. Seth lands another low blow and a kneeling superkick and the curb stomp. Beth, Nattie, Sasha and Bayley face the Iicons and Tamina and Nia. Iicons do goofy double teams and pose goofily. Beth charges and Tamina and sends her through the barricade. Glam Slam takes out Peyton – this was a solid showcase of Beth. 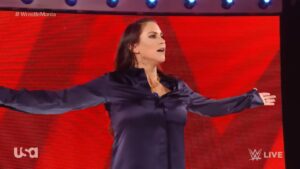 Batista comes down in a ridiculous maroon suit and throws to a video package of him destroying HHH and telling him to kiss his ass. Elias rants for a bit in front of MetLife Stadium and Apollo beats Jinder before an Andre battle royal brawl preview breaks out. EC3 tosses everyone over here in the goofball preview. Kurt comes out for a farewell address and an epic video airs celebrating his career. It spends a lot of time on the comedy side of his act. Corbin talks about the video needing to be in black and white and says that the man standing in the ring can barely move and take his jacket off and he gets blown up and he can’t hang anymore. Corbin buries the fans for saying that Kurt deserves someone better in his last match, but they need to forget who they saw in the video, because the last image of Kurt will be a broken down old man in the ring. Kurt wants an exibition match tonight. Rey comes down and Kurt lands an Angle slam.

Charlotte cuts a cocky promo and says that Steph changed the match because she changed the game. The Revival beat Ricochet and Aleister Black via countout when Dawson sneaks under the ring and prevents Ricochet from coming back in the ring after a floor brawl. Black lays out Wilder with a black mass outside the ring, Dawson mid-ring and the 630 hits. Alexa talks to Tyler and EC3 about the battle royal before Braun scares them after talking about liking SNL. Drew and Roman brawl backstage. Ronda, Charlotte and Becky face the Riott Squad. Armbar taps Liv and then Ronda brawls with Charlotte. They all get arrested and Becky and Ronda kick in the back of a car. Ronda kicks a window out and then Becky and Charlotte kick each other and then Ronda runs a car into a cop car. Ronda dangles her head out and Charlotte smacks it with a knee that runs her own face in to the window trim. Well that was ridiculous.

Heavy Machinery beats Gable and Roode with the Compacter. A Kofi career recap video airs. Braun beats a pair of jobbers representing the SNL guys. Lio cuts a promo for Lashley and then the Demon returns after a goofy video package with some bad CG and a weird howl. Corbin faces Rey and works on the knee before beating him with Deep Six. Kurt jumps him and taps him to the ankle lock before a cop brawl recap ends the show. This was a pretty skippable show outside of the cop car stuff, which was too cute for what should be a blood feud.