Wrestlemania 35 Weekend Results Spoilers for the First-Ever Up Up Down Down Champion Crowned follows. 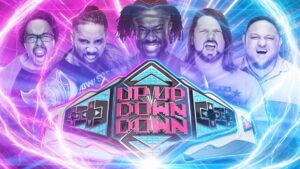 Mikaze won the tournament, but could not celebrate for long as The Miz immediately swooped in to challenge the champion in a game of “Tetris.” In the end, Mikaze was able to hold off The A-Lister and remain champion after a crazy turn of events.

Relive the incredible championship win in the video below.

There’s even a championship belt.

Tags: Mikaze, sasha banks, Up Up Down Down, Wrestlemania 35