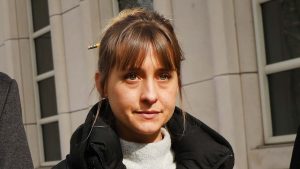 Ms. Mack wept as she took responsibility in federal court in Brooklyn for recruiting women into the Nxivm organization.

Allison Mack tearfully told a judge on Monday that she first joined the cultlike group known as Nxivm to “find purpose.” She was unsatisfied with her acting career, she said, despite her role on the successful television series “Smallville.”

Led by Keith Raniere, the group, based in Albany, billed itself as a self-help organization. It offered workshops and classes that promised participants greater self-fulfillment.

Ms. Mack became so involved, federal prosecutors said, that she began recruiting other women into a secret sect within Nxivm in which women were branded with Mr. Raniere’s initials and were forced to have sex with him.

“I was lost,” Ms. Mack said on Monday, while pleading guilty to racketeering and racketeering conspiracy charges related to her role in the group.

In a lengthy, tear-filled confession at Federal District Court in Brooklyn, Ms. Mack admitted to luring women into Nxivm (pronounced NEX-ee-um), where they were extorted and coerced into following Mr. Raniere’s orders.

“I must take full responsibility for my conduct,” Ms. Mack, 36, said.

Her arrest was part of a larger federal case against high-ranking members of Nxivm, including Mr. Raniere and four others. Federal authorities had begun investigating the organization after The New York Times published an article in late 2017 detailing the inner workings of the secret sorority within Nxivm.

Ms. Mack’s Hollywood ties boosted the case’s profile and grabbed headlines. After prosecutors announced the charges against her, other actresses said that Ms. Mack had tried to get them to join her “women’s group.” Several female journalists also shared that they had received emails from Ms. Mack trying to pitch them on joining a female empowerment organization.

Prosecutors said the secret sect’s purpose within Nxivm was to groom sexual partners for Mr. Raniere, who is 58. It was called D.O.S., an acronym for a Latin phrase that roughly translates to “Lord/Master of the Obedient Female Companions,” court papers said.

In court on Monday, Ms. Mack admitted she recruited women into the group by telling them they were going to become members of a female mentorship program.

Her goal, she said, was to promote Mr. Raniere’s teachings and help him further his objectives. She was so dedicated to doing so, she said, that she engaged in criminal conduct.

Ms. Mack said that to become members of the secret D.O.S. group, women were required to offer up “personally damaging or ruinous” information. The group also collected explicit photos and videos from members as well as rights to their properties, she said.

Prosecutors have said that the women were warned that the damaging or embarrassing information would be made public if they revealed the existence of the group.

Ms. Mack admitted on Monday that she wielded the information to blackmail the women into performing services for her and the group. The organization was set up to make women think “they could suffer serious harm” if they did not follow orders, she said.

The D.O.S. group was organized into circles of women “slaves” that were led by “masters,” prosecutors said. When Ms. Mack was arrested last year, officials said that she had recruited women into the society as “slaves” and had required them to have sex with Mr. Raniere.

But in her plea before the court, Ms. Mack did not directly address whether women were coerced into having sex with the group’s leader. She did admit that she had obtained “labor and services” from two anonymous women who were mentioned in the indictment.

Ms. Mack sobbed so much as she gave her statement that Judge Nicholas G. Garaufis interrupted to ask if she was all right. Ms. Mack then apologized to those that she hurt through her “misguided adherence to Keith Raniere’s teachings.”

Ms. Mack’s biography on her website, which was no longer active on Monday but could still be accessed in archives, mentioned that Mr. Raniere had mentored her after “Smallville” ended in 2011.

As she spent more time with the group and with Mr. Raniere, she said in court, she was persuaded into believing Mr. Raniere’s messages would be beneficial to others.

But almost a year after her arrest, Ms. Mack said that she had concluded through introspection and “self-examination” that Mr. Raniere and some of his followers had broken the law.

Others charged in the case include Mr. Raniere and Clare Bronfman, an heiress to the Seagram’s liquor fortune.

Ms. Mack faces up to 20 years in prison on each count to which she pleaded guilty. She is scheduled to be sentenced in September.

It was unclear whether Ms. Mack will be entering into a cooperation deal with federal prosecutors. Her lawyer declined to comment outside the courthouse and did not respond to phone or email requests.

The trial of the remaining defendants in the case is scheduled to begin later this month.